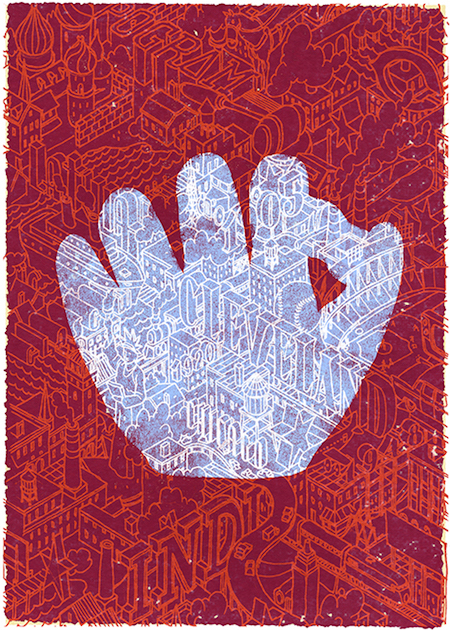 The glove had at one time belonged to Harry Handelman (1905-2000): son of Hyman and Dora Handelman, whose escape from Russian-controlled Latvia and the pogroms had taken them through Glasgow and Chicago before finally depositing them in Cleveland, Ohio, in 1913. Young Harry studied hard and worked at his father’s grocery store. Any time that he had left over was spent playing baseball, the joyful discovery of which had been his personal reward for having endured a chaotically peripatetic childhood — and which he loved “more than anything in his life,” according to one of his descendants. Later, as an adult, when asked to describe his worst day ever, Harry would answer that it was the day he was supposed to have played in a high-school baseball tournament but was called in to work at the very last minute by his father, who was desperately short on help.

Harry was accepted to The Ohio State University and began attending classes every other semester, working in between semesters to pay for his education. Thence to law school, and to a long and successful career as an attorney in Cleveland from 1941 to 1974 — a span of time that saw him getting married and having two daughters, and that also saw his beloved Cleveland Indians signing the great Satchel Paige, bringing home two American League pennants, and winning the 1948 World Series.

In the late 1970s, a retired and reflective Harry began to recognize in his grandson, Scott, a nascent athletic ability that surely must have reminded him of his own youthful triumphs on the diamond, and thus bequeathed to him one of his most prized possessions: his baseball glove.

Scott lived across the alley from me. One day in 1981, I asked him if I could borrow a baseball glove to take to school.

I think we had a game that afternoon. I didn’t own a glove of my own. I didn’t much care for baseball, to tell you the truth.

I took it to school, left it in my locker for too long, and when I finally went to retrieve it, it was gone.

ABOUT THE ARTIST: Andrew DeGraff is an artist and illustrator living and working in Maine.

See All Posts by Jeff Turrentine

Jeff Turrentine, a columnist for OnEarth magazine, writes about culture, politics, and the environment. He lives in Brooklyn.