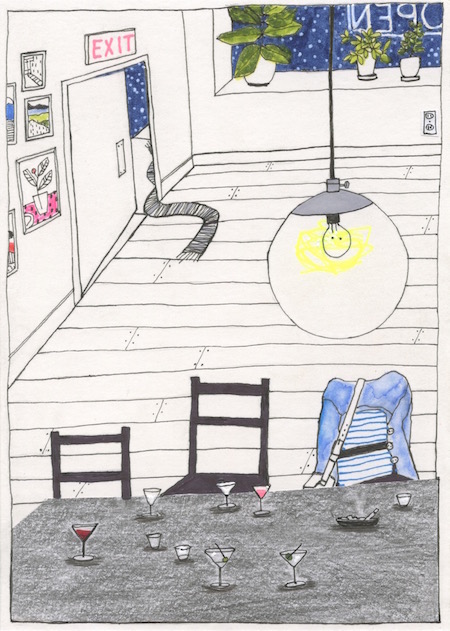 In the fall of 1999 I moved to New York City from rural Minnesota, arriving with a vague plan, no nest egg, and precious little in the way of city streetwear, the outer signifiers that distinguish the walking natives from the newbies. Back home, I’d walked around in thrift-store finds but drove around in a brown 1975 Sierra Half-Ton pickup truck with wide orange racing stripes down the sides; that was my vessel, my winter coat, my ride. Here, in the blurry pedestrian crowd, where the stamping boots moved at racing pace, I began to see that bags weren’t just fashion statements, but packs that described a particular journey. Boots were transport; and cool ones were like sweet wheels. I did have one thing, though: a curious scarf made of dog hair.

Soft and sand-brown, the scarf tapered sharply at the ends into furry charcoal stripes. My husband Aaron had recently come back from a trip to rural Latvia with two gifts he’d bought from a woman at a market stall: the dog-hair scarf and a hat made of fox fur. The fur hat hugged my head like the cap on a pen and looked amazing, but I promptly lost it — probably fell out during a gas station stop — on the long drive to New York. But every day I stepped out onto the sidewalk wearing the Latvian scarf, its two tails knotted loosely at my neck in a casual, nippy dogfight. It was oddball and brave, almost kooky enough to be hip, and felt like the first piece of my new identity clicking into place.

It wasn’t to be that easy though, because almost as quickly as the fur hat, it was gone. I went to a party at a bar, shoved the scarf up the sleeve of my coat, hooked my bag over a chair, and wandered off, refusing to believe the tourist myth that you have to guard your stuff in the big city. Two hours later, I returned to my bag and coat, but not the dog-tail scarf. Either someone had plucked it from my coat like a magician pulling out a silk, or it had simply awakened and slithered away.

After permitting myself a full day of mourning, I decided that the scarf’s loss narrative didn’t matter. Just two weeks into my New York life, I sat on the subway bench and took in everyone’s outer signifiers in a glance but then began to see beyond them, to the faces.

ABOUT THE ARTIST: Heather Kasunick has been teaching visual art at a public high school for over 15 years. Her studio work has been exhibited at the Brattleboro Museum and Art Center, the Fitchburg Museum of Art, and other venues. Hundreds of Heather’s illustrations are featured in the UNBORED series of books for kids along with fellow Mass Art pal, Mister Reusch. She lives in Northampton, Mass., with her bike happy husband and their sweet, lazy dog. You can follow her drawing adventures on Instagram: @wondercupboard.

See All Posts by Amy Thielen

Amy is a chef, food writer, and television personality who focuses on Midwestern cooking and food culture.