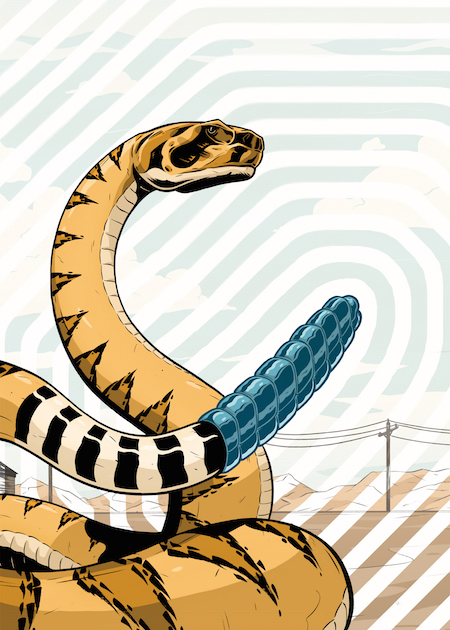 In “Wichita Lineman,” Jimmy Webb’s 1968 pop masterpiece, the solitary lineman works for the county, driving the main road, “searchin’ in the sun for another overload.”

My father was a lineman, beginning in the early ’60s, for a small independent telephone company in rural West Texas. He didn’t drive many main roads. His work lay mostly along the caliche farm-to-market routes that lined the panhandle. Maybe he dealt with overloads, but I think it wasn’t usually anything so existential. It was the everyday stuff of a country telephone man: wind damage, buried lines severed by plows, service complaints from isolated elderly customers whose phones were their only tether to the outside world.

What my father searched for in the sun — vigilantly, warily — were rattlesnakes. Among occupational hazards, they were second only to stray electric lines as the menace he was sure would do him in one day, out there alone in his pickup, two hours from the nearest hospital. In the bed of the pickup he kept an old hoe whose wooden handle he had cut in half, refashioning it into a kind of mace that gave him sufficient distance from a coiled rattler and sufficient control to sever its head with a hard, clean blow.

Contrary to reputation, rattlesnakes want as little to do with us as we with them. But every now and then, up against a fence or a tractor shed, a chance encounter would occur between my father and a Western diamondback from which neither party could easily retreat. He would take the dead snake’s rattle with his pocket knife and that evening he’d give the trophy to me or my brother, depending on whose turn it was. I could never believe how alien the rattles looked. Or that natural selection had produced them, sonic appendages designed for the sole purpose of broadcasting: Stay the fuck away. I’m a natural-born badass. They are the animal-world equivalent of an air-raid siren.

What eventually got my dad wasn’t a snake, of course. It was Marlboros and a predisposition to cardiovascular ruin that ran like wildfire through his family. I was 27 when he died, living in New York, four years out of Texas. I had a few keepsakes from him and the land where I grew up – some of his pocket knives and guitar picks, a couple of the Comanche arrowheads we found in the pasture by the house. But the rattles were the prize, especially meaningful as implements of sound, given that most of the time I spent with my dad in the last years of his life was on the phone; he was a voice, a sound.

When my mother eventually left the town where we lived, I packed the things from my old room, including a little tin container with a handful of rattles, and mailed it to Brooklyn. I haven’t been able to find it since. I keep looking for it in the basement, shaking boxes, listening.

ABOUT THE ARTIST: Max Temescu is an illustrator from Philadelphia then St. Louis then New York who works mostly in storyboards, comics, and editorial illustration. He is a pretty fun guy too probably.

See All Posts by Randy Kennedy

Randy Kennedy is an editor at the gallery Hauser & Wirth and was a longtime art writer for The New York Times. His novel about West Texas, Presidio, will be published by Simon & Schuster in 2018.