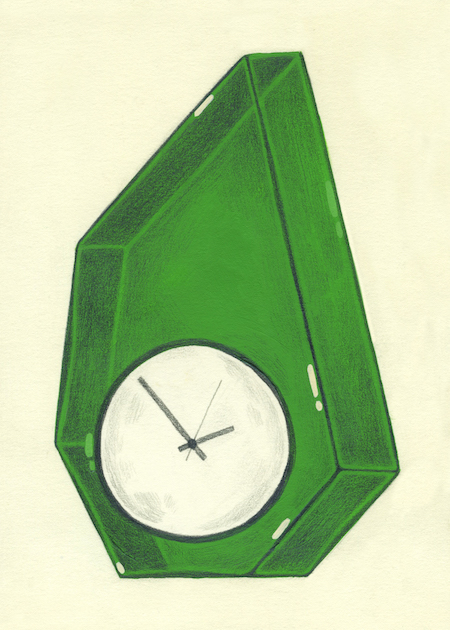 When I think of all we lost that year — our parents, our home, our homeland — a clock shouldn’t really come up at all. It was made of green glass, angular and abstract in shape, about the size and weight of an iron. It had scant beauty or worth. I’m not sure it even kept time.

The clock sat atop the marble mantelpiece in our childhood home in Kobe, Japan. The mantel sat atop a fireplace that did not work because Japanese homes have no chimneys. The clock and the mantel were decorative pieces in the decorative sitting room where no one ever sat, until that summer, and only then to keep company with our mother’s corpse.

The undertaker had laid her body out on a thin mattress on the floor, packets of dried ice tucked all around, a quilt tucked up under her chin. We who loved her were to sit with her until her funeral and cremation a few days later. The room was cold, on account of the dry ice and the air conditioning. It was late August.

I was alone, for once. My siblings and I had returned home from abroad for the last months of our mother’s life, along with our spouses and our eleven children. And then of course there was our father, for whom our mother’s long illness had somehow never equated death until the day death came. The shock of losing her felled him. Within months, we were to lose him, too, along with our childhood home and all that it contained.

But we didn’t know that, then. While usually the big house rang with laughter — because even amid grief, children will laugh and make you laugh — this moment I could hear only the green glass clock as it tick, tick, ticked. Only the clock watched as I applied makeup to my mother. The undertaker had let me have that final, intimate task.

She looked strange, dead. Gravity stretched her face back toward her ears, a facelift she hadn’t sought or needed. And the makeup was trickier than I thought. The eyeshadow wouldn’t dust properly on her papery lids. Her usual foundation clashed with her graying skin. Lipstick pulled her mouth weirdly to the side.

Tick. Soon the house would fill again and her face still looked like a four-year-old’s first Barbie makeover.

Tick. If I smashed the clock into a million green glass pieces, maybe I could stop time.

Tick. If I could stop time, it wouldn’t be now.

Tick. It would be yesterday, when she lived.

I wished I’d smashed it. If only to see.

ABOUT THE ARTIST: Rose Wong is a Brooklyn-based illustrator and plant lover.

Lisa Takeuchi Cullen is a TV writer, author and journalist. Her two books are novel Pastors’ Wives (Plume/Penguin, 2013) and nonfiction Remember Me: A Lively Tour of the New American Way of Death (HarperCollins, 2006). Please follow Lisa on Twitter @lisacullen and visit www.lisacullen.com.