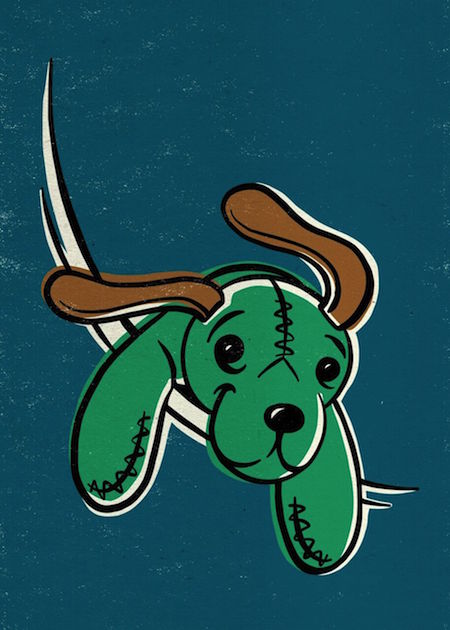 My mother once gave me a soft sculpture to add to my menagerie of desk gods. A green suede dog, filled with sand. At first he sat on my desk with the other lucky, superstitious-ish figures — Hindu gods from one of those batik-and-bead shops, a cast-iron turtle, a stuffed dragon, a wooden lion painted red that looked like it had been chipped off a furniture finial, two small cast-resin Buddhas — holding down papers. The dog was simple, unstructured, floppy. His only characteristics, aside from being green, were his brown ears and shiny black eyes. He felt so nice in my hand: a soft, warm weight. He wasn’t calming, he was just calm. He was a little, heavy, sure thing; a pliable undeniability. Without really noticing it, I started picking him up and carrying him around with me, petting him in my coat pocket or dancing his feet on my fingers in the car. I called him Green Dog, because I’m atrocious with names and always have been. My childhood teddy bear was and still is “Big Grey Bear,” a stuffed rabbit with red eyes and a carrot in a pouch around his neck was “Angry Bunny”.

For being made of leather and stitching and sand, he was a charismatic fellow. He was content with being Green Dog; he gave a sense that being content with being still was a thing that was possible, which had been barely conceivable to a 20-something kid whose achievements till then were mostly dropping out of things and hopping between states and schools like grease spitting in a hot pan.

And of course you know where this is going. One day, when I was between colleges, working three part time retail-food-service-coffee-slinging jobs in my hometown, just a mess in general, carrying Green Dog in my pocket everywhere just to feel his secure weightiness in my palm, somewhere between my mom’s car and the house and the rest of my life, he went astray. Maybe I put him down on a store counter and walked away, or maybe he slipped out of my coat pocket with a flurry of crumpled receipts and gum wrappers. I’m not sure how much time went by between whenever he went wherever he was and when I noticed him missing, but I remember it being apparent to me that he was Gone Now. He wasn’t going to be found. There was no getting back that dense weighty certainty in my hand.

I made a half-hearted attempt to replace him, but I hardly tried. The artist didn’t make the little suede dogs anymore, and even if I could find another green dog, it wouldn’t be Green Dog. I gave up before I even noticed I had. Even though I could still (and still can) feel him in my hand without concentrating too hard.

ABOUT THE ARTIST: Shayna Piascik is an independent illustrator living in central MA. She draws on inspiration from political satire to quirky and cute animals. Shayna also manages the MFA in Illustration program at the Hartford Art School.

See All Posts by M.R. Sauter

M.R. Sauter is an Assistant Professor at the University of Maryland College of Information Studies. They are the author of The Coming Swarm: DDoS Actions, Hacktivism, and Civil Disobedience on the Internet. They blog at odd letters and tweets at @oddletters.