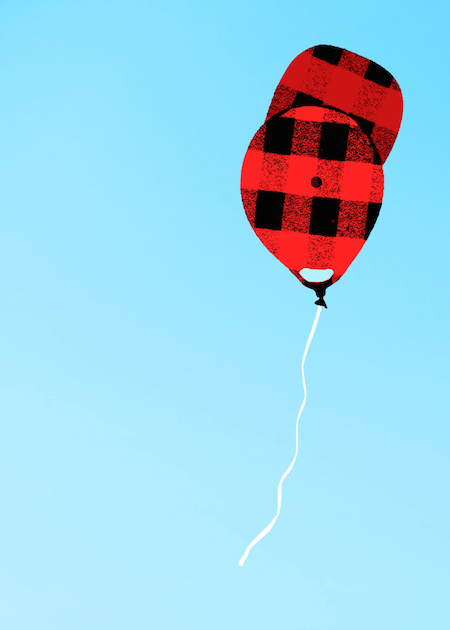 When I was seven years old, I was given a red hunting hat. It was made out of rough flannel and shaped like a baseball cap, although with a small band over the brim where the team logo would have been. I don’t know what the band was for, but I remember imagining a pack of cigarettes slipped behind it. I have a vague sense that the hat originally belonged to my mother, even though I can’t imagine her wearing such a thing except as a joke. I do know, however, that it fit my head as well as it did hers, and so was evidence that I had reached a milestone on my journey to adulthood.

I loved that hat, partly because it was red — my favorite color at the time; partly because it looked like the hat worn by the boy on the cover of my Peter and the Wolf record album, and partly because that rough, red flannel seemed consummately utilitarian and so decidedly unchildlike. I didn’t exactly feel capable of shooting a wolf when I wore it, but it did make me feel competent and powerful as I walked though the snowy woods around our house.

Only a few days after I got the hat, my family drove from our home in northern New Jersey to see friends in Westchester. There was no snow that day, and the weather was so warm we drove with the windows open. As we passed along the circular approach road to the Tappan Zee Bridge, my brother, who was two years my junior, asked if he could try on my hat. I didn’t want to give it to him, but my father told me I was being selfish, so I reluctantly passed it over.

I will never know what possessed my brother, but as soon as he had put on the hat, he stuck his head out the window and, in an instant, the hat was caught by the wind and flipped off. I flung myself against the rear windshield, where I watched the hat flutter through the air, roll over on the grass several times and finally settle in a ditch. I shouted to my father to stop the car, but he said it was too dangerous, and so I watched the hat grow smaller and smaller and finally disappear as we rounded the long arc of the approach road. I was riven with sorrow as I watched that hat recede, not just for my own sake, but for the hat’s. I imagined it growing lonely and cold all by itself beside the noisy highway. I imagined rain falling on it, and snow. I was so overcome that, even before the hat was out of sight, I had begun to cry.

Absurd as it might be, I feel that sorrow intensely to this very day. I am not sure why, but I think that the disappearance of my red hat gave me my first intimation that, in this adult world into which I was growing, things I loved dearly would be taken away from me and I would never get them back — a lesson I have learned over and over since that time, of course, and it has never gotten any easier.

ABOUT THE ARTIST: Oliver Munday is a graphic designer in New York City. His monograph Don’t Sleep will be published by Rizzoli next Spring.

See All Posts by Stephen O'Connor

Stephen O'Connor is the author of five books, most recently, Thomas Jefferson Dreams of Sally Hemings, a novel, and Here Comes Another Lesson, short stories. His fiction has appeared in The New Yorker, Best American Short Stories, and many other journals. His story, “Ziggurat,” was read by Tim Curry on Selected Shorts. He teaches in the Sarah Lawrence MFA writing program.