One in a series of ten posts reprinted from our friend Lisa Jane Persky’s blog Chickens in Literature. 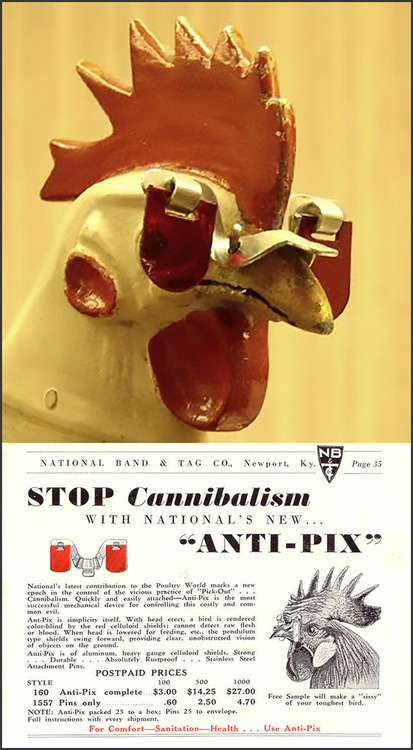 “The flock gets sight of a spot of blood on some chicken and they all go to peckin’ at it, see, till they rip the chicken to shreds, blood and bones and feathers. But usually a couple of the flock gets spotted in the fracas, then it’s their turn. And a few more gets spots and gets pecked to death, and more and more. Oh, a peckin’ party can wipe out the whole flock in a matter of a few hours, buddy, I seen it. A mighty awesome sight. The only way to prevent it — with chickens — is to clip blinders on them. So’s they can’t see.” — from Ken Kesey’s One Flew Over the Cuckoo’s Nest

Lisa Jane Persky is founding staff member of both the New York Rocker and the Los Angeles Review of Books. Her work as journalist, photographer and artist has appeared in Mojo, Vulture and The Pitchfork Review among others. Her fiction has appeared in BOMB and has been anthologized in Eclectica: Best Fiction Volume 1. Lisa is also an actress who has appeared on, off and off off Broadway. 30 years of her film and television work is listed on the IMDB. In her spare time she collects chickens found in literature at chickensinliterature.com and is writing a memoir of growing up Bohemian in the years between the Beat and the Blank Generations.