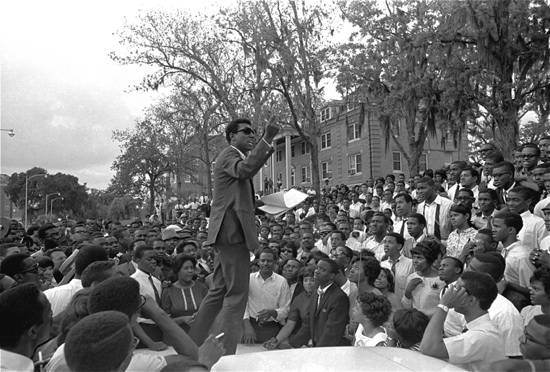 After the disillusioning Democratic convention of 1964, the Student Nonviolent Coordinating Committee split into two factions, one of which favored nonviolent tactics and integration-oriented policies. The other, increasingly revolutionary faction was led by STOKELY CARMICHAEL (1941-98), a Trinidadian-born activist newly graduated from Howard with a philosophy degree; the era we know as the Sixties (1964-73, IMHO) began at this moment. (To be even more precise: The Sixties began at the ’64 Newport Jazz Festival, when Carmichael and his friend Abbie Hoffman were beaten up by the police.) Influenced by Malcolm X and Frantz Fanon, Carmichael called for black Americans “to define their own goals, to lead their own organizations”; the Civil Rights Movement’s unintended function, he claimed, was to integrate blacks more securely into America’s invisible prison-state. His anti-anti-utopian vision of Black Power finally led Carmichael out of SNCC and out of the United States — he relocated to Guinea, and changed his name to Kwame Touré. For the rest of his life, he invariably answered the telephone with the same greeting: “Ready for the revolution!”

On his or her birthday, HiLobrow irregularly pays tribute to one of our high-, low-, no-, or hilobrow heroes. Also born this date: | Breece D’J Pancake | Antoine de Sainte-Exupery |