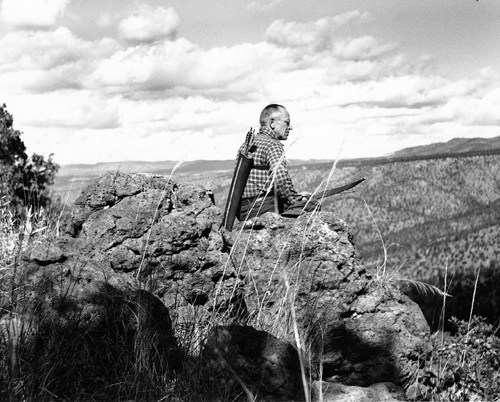 Wisconsin’s Sand County lacks the grandeur of the Sierras that inspired John Muir. Its modest landscapes of meadows, streams, and oak savannas do not exhibit the sublime extremes of the ocean that furnished Rachel Carson with her first muse. Unlike Thoreau’s Concord, no shots fired here were heard ’round the world. In fact, it doesn’t even exist. The Sand County of ALDO LEOPOLD (1887–1948) is the Yoknapatawpha of ecology; instead of Snopeses and Littlejohns, its denizens are skunk, meadow mouse, and rough-legged hawk. In the play of seasons and the rhythms of birth and predation, light and efflorescence, Leopold came to understand his human role in the landscape not as that of Romantic speculator or fierce protector, but as another creature dependent on the sustaining patterns of life. Wandering the southern Wisconsin countryside of which his Sand County is the fictive seat, this forester, professor, and hunter forged a philosophy as rigorous and austere as that of the pre-Socratics. “A thing is right,” he wrote, “when it tends to preserve the integrity, stability, and beauty of the biotic community. It is wrong when it tends otherwise.”

On his or her birthday, HiLobrow irregularly pays tribute to one of our high-, low-, no-, or hilobrow heroes. Also born this date: Aldo Leopold, Eva Hesse.