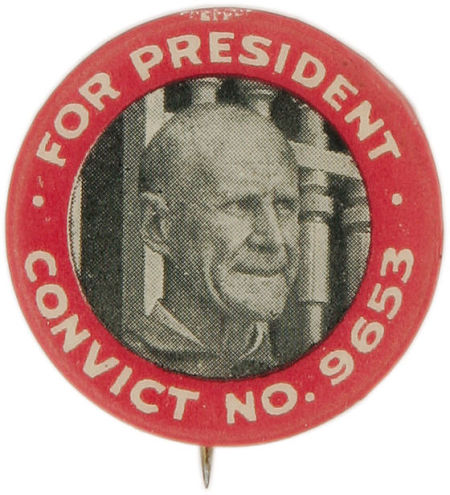 On the afternoon of June 16, 1918, labor organizer and political activist EUGENE V. DEBS (1855–1926) addressed the Ohio Socialist Party convention in Nimisilla Park, Canton. Debs’ speech included both the rousing affirmations (“I would be ashamed to admit that I had risen from the ranks. When I rise it will be with the ranks, and not from the ranks”) and lucid criticism (of “these very gentry, who today are wrapped up in the American flag… who are scanning the country for some evidence of disloyalty”) that made him a revered figure of the left since the great Pullman Strike of 1894. In 1905, Debs co-founded the Industrial Workers of the World, a.k.a. the Wobblies, many of whom, by late 1916, would strongly oppose America’s likely entry into Europe’s — and, they believed, capitalism’s — Great War. Two weeks after his Canton speech, Debs was indicted in Cleveland Federal Court for violating the 1917 Espionage Act criminalizing much anti-war activity. “Your Honor, years ago I recognized my kinship with all living beings,” Debs told Judge D.C. Westenhaver at his September 14, 1918 sentencing. “And I made up my mind that I was not one bit better than the meanest on earth.” Unyielding, Westenhaver gave Debs ten years and disenfranchised him for life. Thus Atlanta Federal Penitentiary Convict #9653 couldn’t vote for himself — but come Election Day 1920, nearly one million others (3.4% of the popular vote) did chose Debs, Socialist Party candidate for President of the United States.

On his or her birthday, HiLobrow irregularly pays tribute to one of our high-, low-, no-, or hilobrow heroes. Also born this date: Sam Shepard and Jim Steranko.