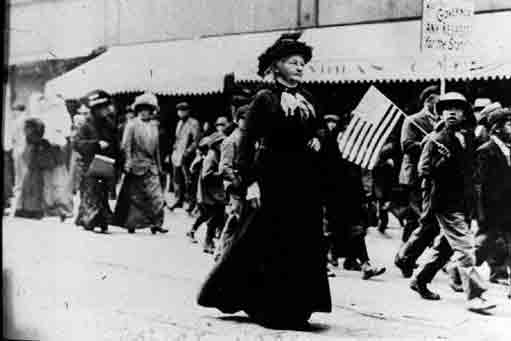 In 1861, dressmaker Marry Harris, whose family had fled Ireland’s potato blight, met foundry worker George Jones in Memphis. The Civil War was bad; the ’66 race riots were bad; and the year after that, yellow fever came. The Jones’ four young children died first, then George. The Iron Molder’s Union buried him and Mary left for Chicago, alone, to again make dresses. She lost everything in the Great Fire of ’71, and was ever more radicalized by the Railroad Strike of ’77, the Haymarket Affair of ’86, the Pullman Strike of ’94. By century’s end, there was a new woman: MOTHER JONES (1837-1930), who said “I’m not a humanitarian, I’m a hell-raiser!” She’d work often with the United Mine Workers, whose men were her “boys,” but where trouble was, she’d go. In July 1903, she led a two-hundred-strong “Children’s Crusade” from Philadelphia to President Roosevelt’s summer home in Oyster Bay, New York. On the way Jones spoke at Coney Island. “Fifty years ago there was a cry against slavery, and the men of the North gave up their lives to stop the selling of black children on the block” Jones began. “Today, the white child is sold for $2 a week, even by his parents to the manufacturers.” In the morning, Jones’ army marched east, led by a fife and drum band.