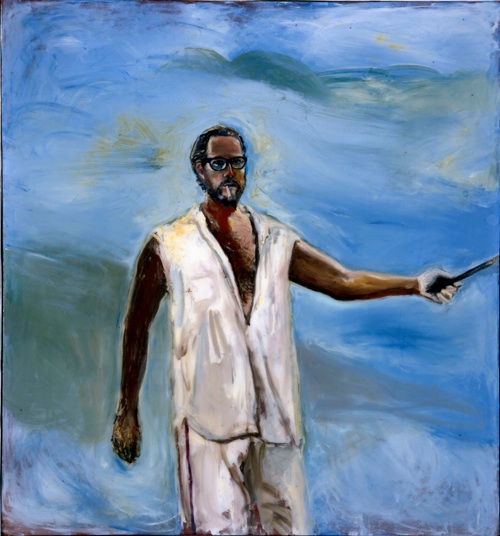 I got to art school right between when you were supposed to like JULIAN SCHNABEL (born 1951) and when you were supposed to turn against him, so it was just the right time to genuinely enjoy him. Popstars like post-chauvinist painter David Salle were seizing a moment, while tragedians like Schnabel were recording its passing; Schnabel may have traded in appropriated grandeur while Salle was remarketing lifted ephemera, but Schnabel’s works, painted on broken crockery and taking up whole walls like funeral crepe, were instant Pompeian ruins with no golden age; formal struggles he was meant to nobly lose. Celebrity was assured but glory was fleeting and somewhere he knew it, notwithstanding the classic one-line biography from one of his successors in the art-star graduating class, Keith Haring, who remarked in the late 1980s, “When I used to complement Julian on a painting, he’d thank me; now, he agrees with me.” That conceit about one’s work could actually be healthy detachment from it, granting the objectivity Schnabel needed for what turned out to be his most enduring accomplishment, his films — a medium which requires a lot more patience and consideration of others’ contribution and perspective. The visual poetry of Before Night Falls was the work that deservedly got everyone taking him as seriously as he did, and the closing soliloquy of The Diving Bell and the Butterfly, with its humble hymn to emotional connection over scenes of glaciers crumbling, was like a testament left for alien archaeologists that there was something about us that didn’t deserve what we did to ourselves. Schnabel’s first film, the artworld melodrama Basquiat, might have been a narcissistic autobiography by other means, but in his expansively envisioned, generously perceived later work Julian Schnabel has become the portraitist of humanity.

On his or her birthday, HiLobrow irregularly pays tribute to one of our high-, low-, no-, or hilobrow heroes. Also born this date: Nestor Makhno.