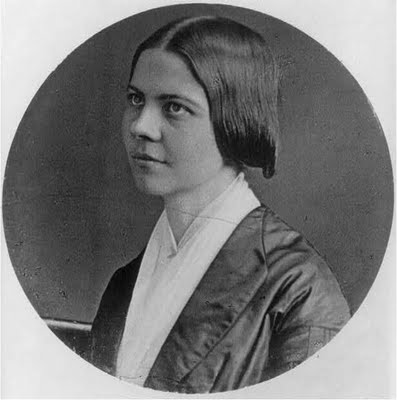 An ardent crusader against slavery and for woman suffrage, LUCY STONE (1818-93) is best remembered today for keeping her birth name after marriage; she was, as far as we know, the first American woman to do so. At the time of Stone’s wedding to fellow abolitionist Henry Blackwell in 1855, a woman gave up virtually everything when she said “I do.” In most states, a married woman was legally barred from owning real estate, inheriting property, or making a will; both she and her children were considered to be under her husband’s exclusive custody and control. Stone and Blackwell entered marriage under protest, as they explained in a handbill distributed to their wedding guests: “We believe… that marriage should be an equal and permanent partnership… that until it is so recognized, married partners should provide against the radical injustice of the present laws, by every means in their power.” (Oh, Lucy and Henry, it gets better.) Keeping her birth name (a practice to which she fully committed in 1856) was but one of several means by which Stone fought the patriarchy; it caught on. The Lucy Stone League, which encouraged and supported women who kept their names after marriage, was founded in 1921 with the slogan, “My name is the symbol for my identity and must not be lost.”

On his or her birthday, HiLobrow irregularly pays tribute to one of our high-, low-, no-, or hilobrow heroes. Also born this date: Alfred Hitchcock and Philippe Petit.

READ MORE about members of the Retrogressivist Generation (1815-24).