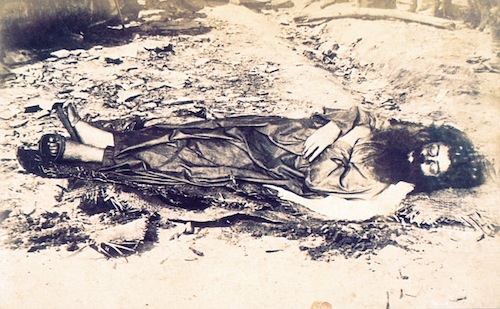 ANTÔNIO CONSELHEIRO (1830–97) was the last in a long line of political mystics, millenarian rebels who fought injustice with the promise of utopia. He came closer than any of his predecessors to realizing the dream of Gnostics and Puritans alike: earthly Jerusalem. He was born in the semi-desert sertão of the Brazilian Northeast; his family suffered from drought, the oppression of landowners, and hereditary feuds. For a time, he worked as a salesman and a tutor. Then his wife left him and something broke: He withdrew into the country and had visions. For twenty years he wandered the backlands preaching, restoring churches, and ministering to the poor. With his long tangled beard, emaciated face and piercing eyes, he looked like Elijah in a blue canvas robe. He spoke out against landowners and taxes, and predicted the days when the backlands would turn into the seacoast and vice versa. In 1893, with a handful of his followers, he settled on an abandoned farm in a place called Canudos. It grew into a town of 30,000 people, a refuge for the poorest of the poor: landless peasants, recently liberated slaves, uprooted Kiriri Indians. The settlement was run as a communitarian theocracy, with rule by apostle. All property was held in common, money and alcohol were banned. Conselheiro returned the church to its communist roots, and his utopian society flourished. Then the Brazilian state declared war on Canudos. Four attempts to take the town culminated in a nine-month siege, at the end of which the army slaughtered the defenders to the last man, woman, and child. Conselheiro himself, weakened by the months he’d spent praying and fasting, died a week and a half before that, most likely of dysentery.

On his or her birthday, HiLobrow irregularly pays tribute to one of our high-, low-, no-, or hilobrow heroes. Also born this date: Donella Meadows.