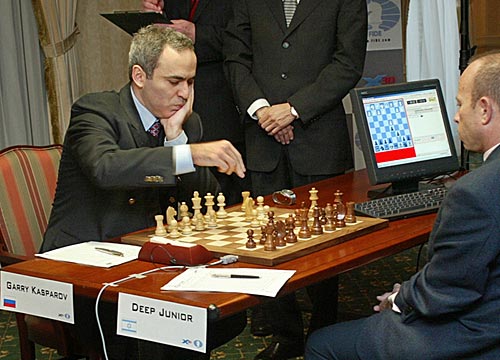 The most charismatic chess player since Bobby Fischer, GARRY KASPAROV (Garik Weinstein, born 1963) was the top player in the world for all but three months of a nearly 20-year period beginning in the mid-1980s. Born in Baku, Azerbaijan, to a Russian Jewish father and an Armenian mother, Kasparov was a member of the CPSU as a young man, but soon became a believer in an inclusive, cosmopolitan Russia and an ardent proponent of a free, democratic system — ideals which have not endeared Kasparov to Vladimir Putin or his oligarch supporters. Best known for his battles with specialized chess computers Deep Thought, Deep Blue, and Deep Junior (he famously lost to Deep Blue in 1997, a blow to the human race), Kasparov continues to believe in the superior power of human intuition and evaluative judgment. Like ancestral fellow traveler Alexander Herzen, Kasparov helped found an organization for the distribution of materials critical of the Russian regime and its strictures. Also like Herzen, he has made himself into a journalist/essayist, issuing regular indictments in varied fora of Putin’s actions and of western leaders’ inaction. In each of his fields of engagement, Kasparov stands for humanity.

On his or her birthday, HiLobrow irregularly pays tribute to one of our high-, low-, no-, or hilobrow heroes. Also born this date: Samuel Beckett, Jacques Lacan, Roy Loney, Michael Herr.