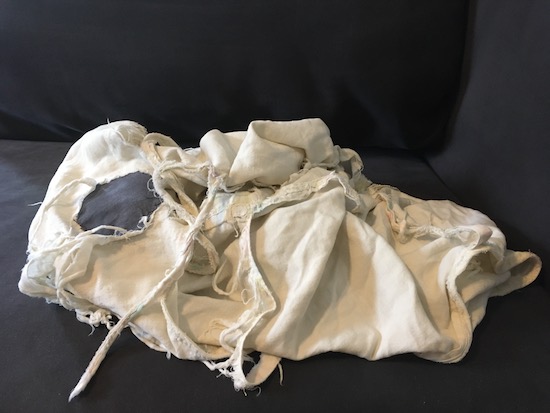 I was elbow-deep and hormone-high in my sister’s toilet, scrubbing away the shit her ex-husband left behind. All I wanted was my baby blanket.

It’s white and torn but whole. In the middle there’s a vague outline of a rabbit, limbs outstretched like a stick figure. Two hand-sewn black spots attest to my 101 Dalmatians obsession. And the folded-up seams reveal perfectly preserved flower patterns and bunnies on bicycles — remnants of stories the blanket was designed to tell. Thousands more were told instead.

We’d been reunited days earlier after I found it in a box methodically marked “Marissa childhood” that I’d dumped at my sister’s for two years turned ten. Her divorce and move meant an end to such arrangements. Cleaning was part-owed, part-catharsis. If I’d told her about my blanket discovery, she would’ve likely said “the white one?” and changed the subject. It was, after all, a part of the family no one mentioned. My blanket relationship was weirder than a typical forever-womb toted everywhere, and my family practices avoidance.

That blanket made me. It was my refuge, best friend, therapist, gateway and shield. I would bend my rubbery body in half like a clam, hide under the blanket’s cotton shell and talk to myself for hours on end, every day. I’d speak in near-whispers creating worlds, personas. And I’d be there — a breathing ghostly lump in our living room armchair — as my family went about their business.

If non-family were around, I never carried on; a rule of my own rooted in self-perceived shame. Eventually, I extended the rule to family and moved the saving grace of a habit into my bedroom. As my body grew, I upgraded to a pastel plaid and then a blue fleece with stars.

A social reject I was not. I had friends, played sports and met all the good-child requirements. If it all sounds sexual, it was in part. I could innocently work through my teenaged soap operas, protected from the realities of practicing my pucker for both sexes. Those lessons came anyway, but I had a way to cope.

When college came along, I put my baby blanket safely into a box. The fleece served as bedding and doubled as my secret study spot. A laptop was awkward, so I’d bring in paper notes, assume the role of teacher and students and reteach myself. It worked.

It still works. Every now and then, I’ll disappear under those soft stars. Such sessions have shifted from fictional tales to pep talks. I highly recommend this motivational method to fellow freelancers.

After the cleaning spree, I came home to bed and properly reconnected with my white blanket. Surprisingly, it fit well enough over 34 years of life and a six-month bump, but it wouldn’t win me any games of hide-and-seek.

I haven’t stored it away yet. But I will. My sister gave me a fuzzy lion baby blanket. It’s time to love that one and whatever life it shapes.

See All Posts by Marissa Frayer

Marissa Frayer is a freelance copywriter and editor whose words have been translated into more languages than she can read.