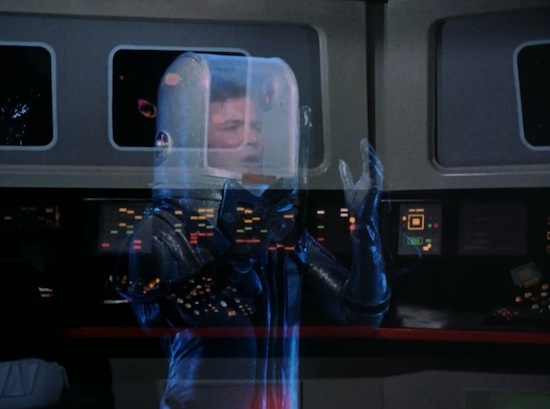 Twenty-third in a series of posts, each one analyzing a single Captain Kirk scene from the Star Trek canon.

Around twelve minutes into “The Tholian Web,” there is a moment of introspection and quiet helplessness that grips James T. Kirk. The camera slowly pans and zooms out as he stands almost motionless on the bridge of a spectral ship he was meant to rescue, several bodies tangled up with one another on the deck around him. His glittered spacesuit evokes memories of textbook circulatory system diagrams. He is alone.

Framed by a wider shot now, Kirk shifts a furrowed gaze to look at nothing in particular — a deceased crewmember at his feet, something off-camera to the left. The ship around him is fading away, but he says nothing into his communicator as the Enterprise crew struggles vainly to beam him back to safety. The soundtrack during these moments goes perfectly and purposefully silent, and we are silent ourselves for a moment, barely breathing, left to draw our own bleak conclusions as the captain dissolves into some new infinity.

The Enterprise crew falls victim to a gathering madness, and at random they attack each other with psychotic rage. Kirk’s ghost appears thrice, visibly attempting to speak but making no sound on this plane of reality, drawing religious reactions from his crew but ultimately written off as febrile hallucinations caused by some unseen contagion. It is a weakness in the fabric of space, reports a glum Dr. McCoy. Our minds are being torn apart by the weakness that surrounds us.

Perhaps this is the state of things as we know it: a collective faith in ourselves cast aside by a space made of weak stuff, a universe bereft of real leadership.

But I think we know better, here in Star Trek’s distant past. Our universe never had a Kirk (he hasn’t been born yet), and as we watch the dissolution of order and logic onboard the now Kirk-less Enterprise we are reminded of just how powerful the absence of the man is; even Spock seems a bit worried. A leader in his mold is hard to come by, but the harsh reality is that a universe with nary a Kirk is in serious trouble.

It is a hopeless thing to stare at the ghosts of great men, as we so often do, and expect them to lead. Perhaps it is better to admit that it is not the fault of the space surrounding us, but our own weakness that drives us mad.

See All Posts by Matt Glaser