A quick note on the origin of pulps. In 1888, Munsey changed his boys’ adventure magazine The Golden Argosy to The Argosy — and in 1896, four years before this series begins, it would become the first all-fiction pulp magazine. Note that having developed out of the tradition of dime novels and boys’ magazines, the pulps (even 1899’s Munsey’s Magazine, though aimed at adult readers) would from the start be tainted with a juvenile image. 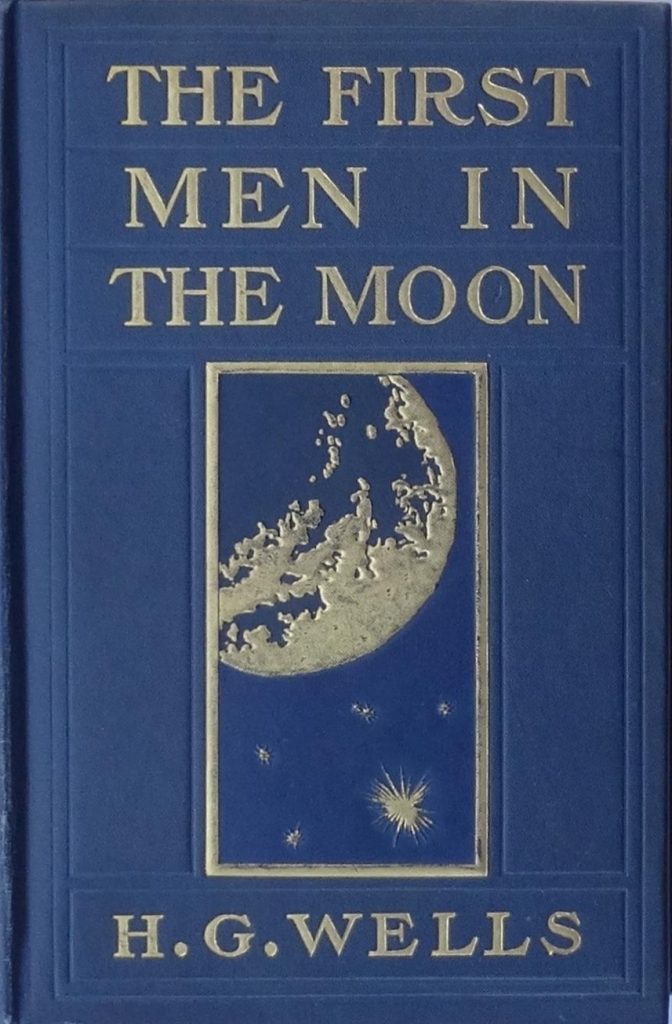 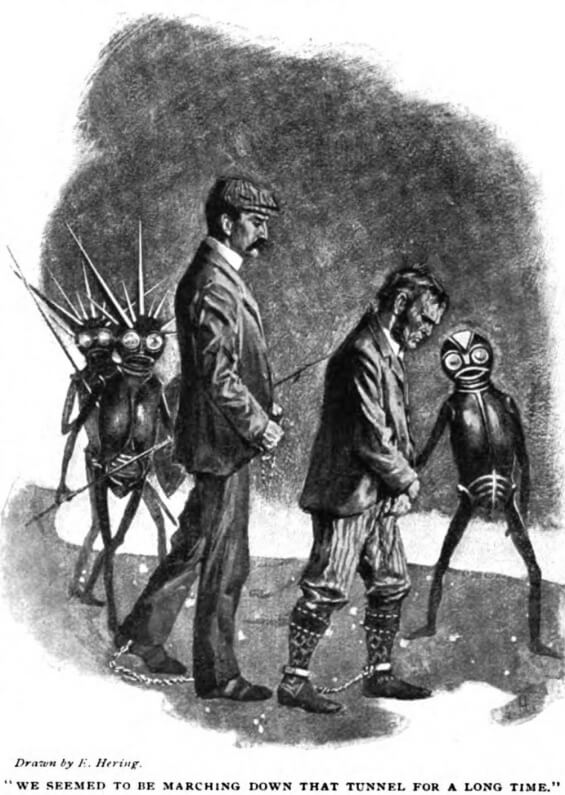 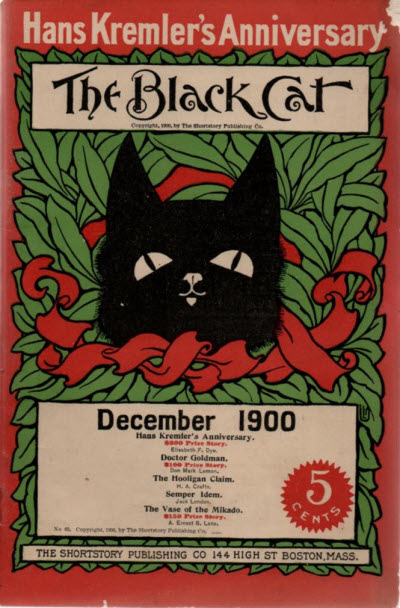 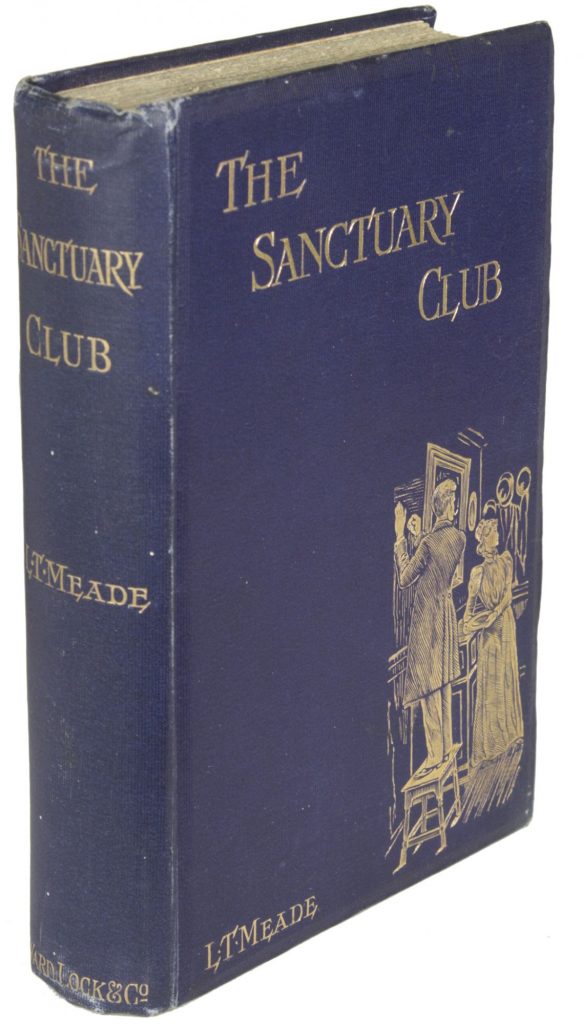 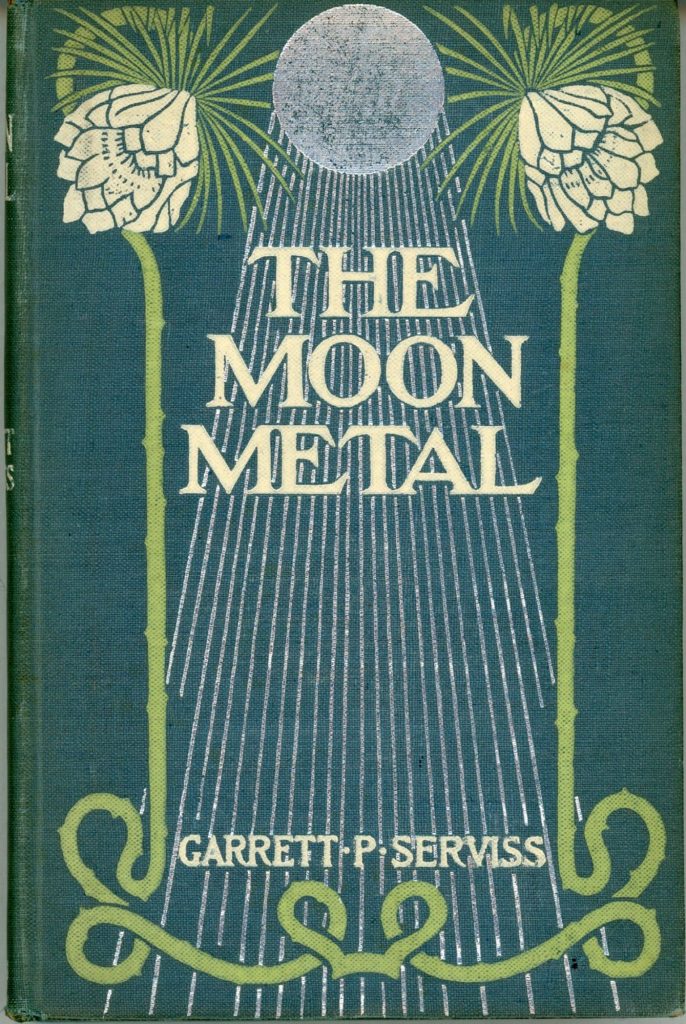 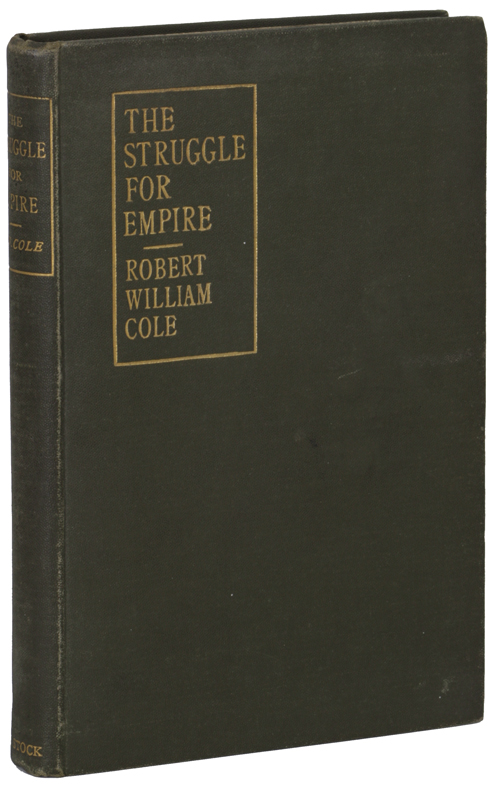 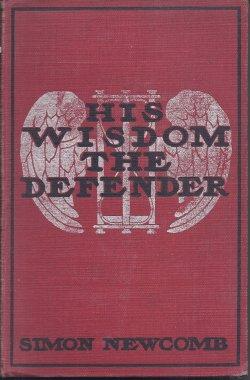 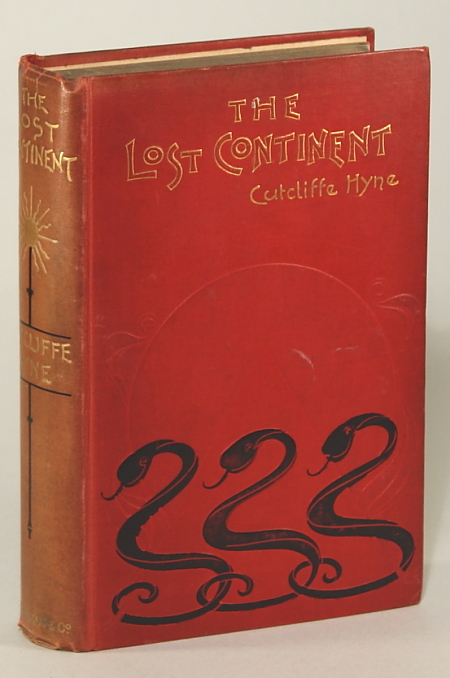 ALSO: Planck formulates quantum theory; Villard identifies a third kind of radiation — gamma rays (Rutherford identified alpha and beta rays in 1899; Marie Curie, who’d recently coined the term “radioactivity,” becomes the first woman faculty member at the École Normale Supérieure). Poincaré’s support for Lorentz’s “wonderful invention” of local time (and remark that it arises when moving clocks are synchronized by exchanging light signals assumed to travel with the same speed in both directions in a moving frame) is a contribution to special relativity; Poincaré discusses the “principle of relative motion” in two papers in 1900. The Boer War raging. King Umberto I of Italy murdered by anarchists. Freud’s The Interpretation of Dreams (his first important major writing; Freud depicts the Unconscious as a cunning trickster that plays games with the conscious mind, disclosing yet not disclosing — via a symbolically ingenious language — what it can bear neither to leave alone nor to reveal), Simmel’s The Philosophy of Money (a Nietzschean vision of modernity as a fluctuating process that rigidifies into economic, cultural, and social forms that are then burst apart by new socioeconomic forces). The era of the Dublin School — Yeats, Moore, Joyce, Synge, Stephens; an insurrection against UK prose by way of Mallarmé and the Symbolists — begins.

The Boxer Rebellion (1899 – 1901) was led by the Society of the Righteous and Harmonious Fists (called the Boxers in the West), who sought to save China by killing Western colonialists in China. In fact, most of the victims of the Boxer Rebellion were Chinese Christians — but Western journalists and politicians cynically used the rebellion to add fuel to the 19th-century “Yellow Peril” fear that the peoples of East and Southeast Asia posed an existential danger to the West. (The phrase “Yellow Peril” was coined by the Russian sociologist Jacques Novikow and popularized by Kaiser Wilhelm II.) Radium Age proto-sf stories on this racist theme would include: Pierre Giffard’s La Guerre infernale (1908), Jack London’s “The Unparalleled Invasion” (1910), Sax Rohmer’s The Mystery of Dr. Fu-Manchu (serialized 1912) and sequels, H. Irving Hancock’s “Under the Ban of Li Shoon” (1916), J. Allan Dunn’s The Peril of the Pacific (1916), and H. P. Lovecraft’s “He” (1926).

Bergson’s Laughter: an Essay on the Meaning of the Comic suggests that a rigidity of form and movement works towards the comic, in part because this “inelasticity” shows a human as an automata. Stiff, mechanical movement shows “a certain fundamental absentmindedness. “We laugh every time a person gives us the impression of being a thing.” Bergson worried about “mechanization” — the restriction of freedom, creativity and life, and their reduction to the status of the mechanical or non-living.

Husserl’s Logische Untersuchungen (The Logical Investigations, 1900–1901) are a two-volume work in which the author discusses the philosophy of logic and criticizes psychologism, the view that logic is based on psychology. It’s an attempt to extend an analysis of the structure of meaningful expressions into an account of the structure of meaning in experience. The Logical Investigations influenced philosophers such as Heidegger and Lask, and contributed to the development of phenomenology, continental philosophy, and structuralism. (The book influenced Talcott Parsons’ The Structure of Social Action (1937), and the Prague linguistic circle, thereby helping to establish the form of structuralism represented by Claude Lévi-Strauss.[20] The work influenced Roman Jakobson, who also left an important mark on semiotics and structuralism.

Röntgen’s isolation of X-rays in 1895, and his discovery that they could be recorded on film, spurred investigation into the ways that other non-visible wavelengths could be captured. It tantalized late 19th-century and early 20th-century fascination with spiritualism and the occult, offering the possibility that other dimensions might be revealed. The founding fathers of thought photography are the Frenchmen Darget (1847–1921) and Baraduc (1850–1909); Darget was an amateur, Baraduc a respected neurologist. From the 1890s to the 1920s, numerous attempts were made to record non-visible human emanations through ‘Electrography’, Darget’s ‘Fluidal Photography’ and various other techniques, and the degree of interest was manifested in the creation of groups such as The Society for the Study of Supernormal Pictures (vice president Arthur Conan Doyle). Cf. Schenkel (ed.)’s Magical Objects: Things and Beyond (2007), and Enns and Trower (eds.)’s Vibratory Modernism (2013).

Rediscovery of Mendel’s laws of inheritance ignites a debate between Bateson (who coined the term genetics) and other Mendelians and the biometricians (these models would be reconciled by Haldane and others). Modern genetics began with the work of the Augustinian friar Mendel; his work on pea plants, published in 1866, established the theory of Mendelian inheritance. The year 1900 marked the “rediscovery of Mendel” by Hugo de Vries, Carl Correns and Erich von Tschermak, and by 1915 the basic principles of Mendelian genetics had been studied in a wide variety of organisms — most notably the fruit fly. Led by Thomas Hunt Morgan and his fellow “drosophilists,” geneticists developed the Mendelian model, which was widely accepted by 1925. Alongside experimental work, mathematicians developed the statistical framework of population genetics, bringing genetic explanations into the study of evolution. Note that although Darwin’s theory of natural selection (Origin of Species, 1859) had presented a highly probably picture of patterns of change, it didn’t say how species change. This technical gap wasn’t closed until the development of the science of genetics in the 20th century. See 1910 for more info on the emerging science of genetics.

One of the goals of this series is to trace the influence of occult and mystical thought and practice of the era on the emerging sf genre. So a definition: “Mysticism” refers to the search for a state of oneness with ultimate reality. “Occultism” depends upon secret, concealed phenomena — not readily available to ordinary understanding or scientific reason — that are accessible only to those who have been appropriately initiated. Mystical-occult beliefs, transmitted through books and pamphlets featuring diagrams and illustrations that would influence the emergence of abstract art, include such ideas as: the universe is a single, living substance; mind and matter are one; all things evolve in dialectical opposition (light-dark, positive-negative, male-female, etc.), things “above” are analogous to things “below,” etc.

Why did mystical-occult thought and practice grow so popular during the 19th century? One compelling theory is that the industrial revolution and its effects on not only the economy but society and culture, coupled with the findings of Darwin and other scientists (including the first law of thermodynamics), led to the perception of life as barren and devoid of meaning. Positivist and materialist philosophies could not explain existence or provide a comforting faith in life after death; but theosophists, magicians, and mystics of the 19th century could and did. See Jennifer Wallters’ thesis “Magical Revival.”

Also in 1900: Having been ejected from the Theosophical society for his magical experiments, William Butler Yeats joined the Hermetic Order of the Golden Dawn. (At various times, the order included writers Arthur Machen and Bram Stoker, the Irish revolutionary Maud Gonne, and the magicians Arthur Edward Waite and Aleister Crowley.) When Crowley showed a tendency to use his occult powers for personal gain rather than for good, the adepts of the order, Yeats among them, decided not to allow him to be initiated into the inner circle. This led to a Yeats-Crowley wizard battle in 1900, aka the Battle of Blythe Road.

In some of the spiritual movements with which this series will be concerned, there was an important crossover between metaphysical ideas and new advances in science (particularly physics and chemistry; n-dimensional geometry, the properties of time and space). Scientific advances allowed metaphysical thinkers to speculate about invisible aspects of the material universe… and to confirm their own beliefs.

The eighteenth and nineteenth centuries also bequeathed to the 1900–1935 era a fascination with energy flows and vibrations pervading the material world. Baudelaire, for example, had noted that “the more vigilant senses perceive more reverberating sensations.” Many mystical-occult writers were also fascinated with synaesthesia, and with sacred geometry — publishing intricate charts and diagrams — a tradition at least as old as Kircher’s 1678 chart Magnetismus Globorum Astralium or Böhme’s 1764 chart The True Principles of All Things. (Schlegel: “A philosophical work must have a definite geometrical form.”) Because the complexities and abstract truths expressed by geometrical form could only be explained as reflections of the innermost truths of the world’s being, they were held to be sacred mysteries.

The positivistic intuition — that science concerns the logical extraction of laws and predictive consequences from verifiable sense data; that science makes no metaphysical leaps, but is instead a way of putting ourselves in a situation where hypotheses can be confirmed or rejected on the basis of procedures that keep one firmly anchored to physical facts and the unbiased analysis thereof — was wearing thin, at this point. As the philosopher E A. Burtt would put it, in The Metaphysical Foundations of Modern Physical Science (1924/1925), a critique of logical positivism that would influence the historian and philosopher of science Alexandre Koyré, and through Koyré the philosopher of science Thomas Kuhn, there is “no escape from metaphysics.” That is, science must account for subjective perspectives, since all objective conclusions are ultimately founded upon the subjective conditioning/worldview of its researchers and participants.

We have never been modern, as Bruno Latour puts it. Although we’ve been led to believe that the defining feature of modernity is that people no longer believe in spirits, myths, or magic, even the human sciences have been more enchanted than is commonly supposed. Philosophy, anthropology, sociology, psychoanalysis, religious studies, folklore and other disciplines contributed to the myth of disenchantment — the myth of mythless modernity — but many of these disciplines’ founding figures were not only aware of, but profoundly enmeshed in, the occult and spiritualist revivals taking place in Britain, France, and Germany; according to Jason Ananda Josephson Storm’s The Myth of Disenchantment: Magic, Modernity, and the Birth of the Human Sciences, for example, it was specifically in response to this burgeoning culture of spirits and magic that they produced notions of a disenchanted world.