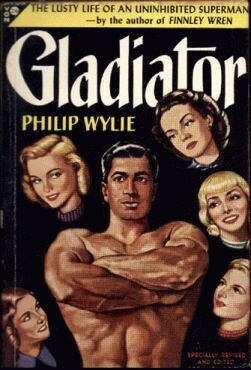 The splenetic, prolific writer PHILIP GORDON WYLIE (1902-71) studied science, mathematics, and psychology in an effort to understand why 20th-century humankind was so narrow-minded, hypocritical, conventional, and — as a result — mediocre. In the Twenties, he was a spokesman for the sexually liberated “now” generation; in the Thirties, he wrote the screenplay for the Buster Crabbe vehicle King of the Jungle; in the Forties, he was an adviser to the chairman of the Joint Congressional Committee for Atomic Energy; in the Fifties, his magazine writing popularized orchid cultivation and sport fishing. (All of which demonstrates that idlers — Wylie’s 1933 Harper’s essay, “The Quitter as Hero,” champions “liquidity” over stick-to-it-iveness — aren’t lazy.) I’m particularly interested in Wylie’s influence on science fiction’s “superman” meme, via his 1930 novel Gladiator, in which a super-strong, invulnerable man builds a fortress of solitude, adopts a secret identity, and vows to aid humankind (before despairing of flawed mortals), and via his even more pessimistic superman novel, The Savage Gentleman (1932). He is best known today, however, for his 1933 novel When Worlds Collide (written with Edwin Balmer), in which scientists rescue a group of men and women, and bear witness to the collapse of civilization, just before the Earth is destroyed; and for the 1942 nonfiction bestseller Generation of Vipers, which lambastes politicians, professors, businessmen, preachers, and — in a chapter for which he will never be forgiven, though this reader suspects that Wylie was a proto-feminist outraged by the debased condition of American women — what he called the unhealthy cult of “Momism.”

On his or her birthday, HiLobrow irregularly pays tribute to one of our high-, low-, no-, or hilobrow heroes. Also born this date: Tony Hancock, Joseph Beuys, Ian Dury, Edward Lear, Katharine Hepburn, George Carlin.