I became acutely conscious of the Argonaut Folly meme — in which a motley crew of outsiders live and work together in precarious harmony — when I was in my 30s, as I’ve recounted elsewhere. But I was first exposed to the meme as an impressionable kid, when my feminist mother encouraged me to read her favorite children’s books: Maida’s Little Shop (1910), Maida’s Little House (1921), and others in which a listless, motherless rich girl finds new purpose amidst misfit peers from a rough Boston neighborhood. In each installment in the series by INEZ HAYNES IRWIN (1873-1970), Maida and co. experiment with a new, utopian commune-like environment — financed by her progressive-minded tycoon father — for living and learning. Therefore, though examples of sentimental realism, the Maida Books are not unrelated to, say, Charlotte Perkins Gilman’s feminist science fiction Herland (1915). You don’t buy it? In 1914, Irwin — a Bostonian who’d been active in the suffragist movement, and who in the 1910s became fiction editor of The Masses — published Angel Island, a feminist, dystopian Lost Race novel about a group of men stranded on an island of winged women. The kicker of this anecdote is the cover below. 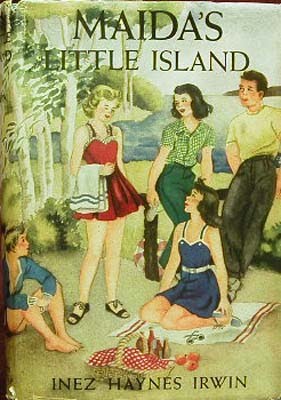 On his or her birthday, HiLobrow irregularly pays tribute to one of our high-, low-, no-, or hilobrow heroes. Also born this date: Dr. Seuss and Scott La Rock.

READ MORE about men and women born on the cusp between the Anarcho-Symbolist (1864-73) and the Psychonaut (1874-83) generations.