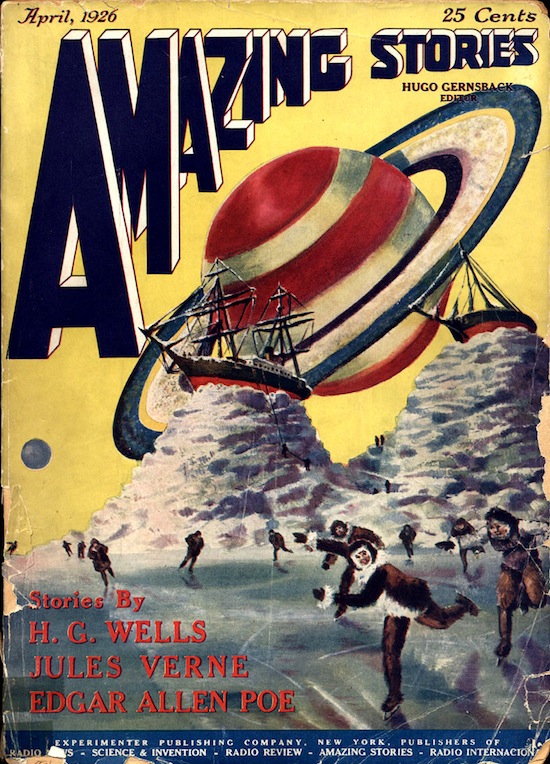 We think of him as a pioneering sci-fi publisher, the guy after whom the genre’s Hugo Award is named, but HUGO GERNSBACK (Hugo Gernsbacher, 1884–1967) thought of himself as an inventor. At 19, he emigrated from Luxembourg to the US, intending to exploit his patent on a heavy-duty battery. When that didn’t pan out, he began importing and selling radios — which, like personal computers, were once strictly for hobbyists. In order to popularize this new technology, Gernsback published specialty magazines like Modern Electrics and The Electrical Experimenter, some of which featured the occasional “scientific romance” story. In 1926, Gernsback launched the first sci-fi pulp, Amazing Stories; later, he’d also publish Wonder Stories, which by 1934 enjoyed a circulation of about 25,000. As a writer, Gernsback was more concerned with predicting future technologies —  his Ralph 124C 41+: A Romance of the Year 2660, serialized in Modern Electrics from 1911-12, depicts TV and channel-surfing, transcontinental air travel, solar energy in practical use, and radar — than character development, snappy dialogue, or well-turned phrases. In fact, it’s at least partly Gernsback’s fault that much pre-Golden Age sf has a reputation for being juvenile. Still, he gave Radium Age and Golden Age sf authors like E.E. “Doc” Smith, Fletcher Pratt, Neil R. Jones, Edmond Hamilton, and Jack Williamson their start… and, for better or worse, he coined the phrase “science fiction.”

On his or her birthday, HiLobrow irregularly pays tribute to one of our high-, low-, no-, or hilobrow heroes. Also born this date: Charles Bukowski, Peter Saul, Tina Modotti, Georgette Heyer.