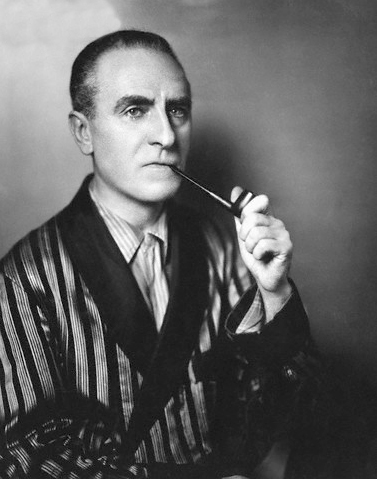 “Imagine a person, tall, lean, and feline, high-shouldered, with a brow like Shakespeare and a face like Satan, a close-shaven skull, and long, magnetic eyes of the true-cat green. Invest him with all the cruel cunning of an entire Eastern race, accumulated in one giant intellect, with all the resources of science past and present….” Thus did the Anglo-Irish pulp writer SAX ROHMER (Arthur Henry Ward, 1883-1959) introduce Fu Manchu in 1912. His brilliant scientist master criminal was a ripoff of Conan Doyle’s Moriarty (while his intrepid sleuth Nayland Smith, and Smith’s comrade/biographer Dr. Petrie, aped Holmes and Watson), but Rohmer’s yarns found purchase in pop culture by stoking readers’ fear of a Yellow Peril emerging from the East. Opposed to British colonial interference in Asia, Fu Manchu (who is clean-shaven, in the stories; the mustache got its name from Hollywood’s version of the character) wages a war of terror on British soil via fiendish inventions and chemical weapons, not to mention pythons, spiders, and knife-wielding Thuggee assassins. Rohmer also wrote non-sf detective thrillers — concerning the adventures of, e.g., Gaston Max, Morris Klaw, and The Crime Magnet — but it was his racist depiction of the sinister Fu Manchu, ancestor of Ming the Merciless, Dr. No, and the Mandarin, which made him one of the most successful authors of science fiction’s Radium Age. He died in 1959 of the Asian Flu.

On his or her birthday, HiLobrow irregularly pays tribute to one of our high-, low-, no-, or hilobrow heroes. Also born this date: Conor Oberst and Ernest Shackleton.