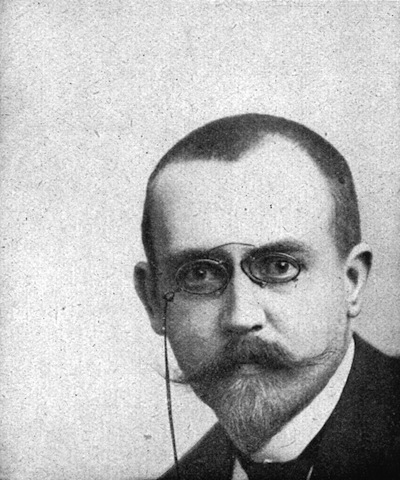 Sci-fi pacifist poet and satirist PAUL SCHEERBART’S (1863–1915) first success was a design for glass panels for a palace for our souls. That makes complete sense to the same kind of reader now as it did in 1914. Whereas most folks thought Scheerbart nuts, more flexible minds like Walter Benjamin and architect Bruno Taut took inspiration from his life as art. And all felt welcome in his basement laboratory, where Scheerbart was always glad to interrupt work on the perpetual-motion machine to split a case of beer. Why? Because if one believes in the Autonomic Existence of the Soul (as one ought to), then taking a break to grow and groom that soul before you send it along on its next life’s work can only be a good idea. Yes, the self-perpetuation machine could use more tinkering, but another poet will be along shortly to pick up wherever we leave it off — plus, the theory of the conservation of energy had proven the dream impossible fifty years earlier. In writing, Scheerbart tried to match the comparable ease and informality of speech. With stories fantastic and simple, he lifted the heavy boxes of time’s paradigm off us that we might see what’s around us more clearly. Like sitting in a room of glass panels for walls. Harmony, not hurt comes from seeing everything. If you knew him well enough, you could have been upset but not confused by his decision to starve himself (to death, some say) instead of feast in a WWI world. On the bright side, Scheerbart did get his “Perpeh” machine working on 12 July, 1910. But wasn’t prepared to share exactly how. “I became a humorist out of rage, not kindness.”

On his or her birthday, HiLobrow irregularly pays tribute to one of our high-, low-, no-, or hilobrow heroes. Also born this date: Gypsy Rose Lee and David Bowie.