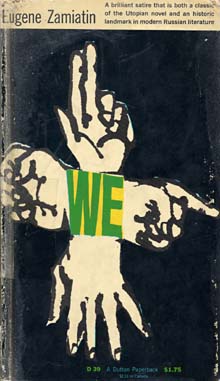 In 1921, Russian engineer and litterateur YEVGENY ZAMYATIN (1884-1937) wrote an essay castigating Communists who demanded of writers subservience to the Party: “There shall be no more polyphony or dissonances,” the former Bolshevik activist warned. “There shall only be majestic, monumental, all-encompassing unanimity.” That same year, Zamyatin completed We, a sci-fi novel that would circulate in samizdat for years (translated into English, it influenced Orwell’s 1984) before being published in Russia a half-century after his death. Extrapolating from the rhetoric of those communist and capitalist utopians who advocated extending Taylorism, Fordism, and other scientific-management techniques beyond the factory, We is a ripping adventure yarn set in a totalized social order whose citizens (“ciphers,” with numbers for names) eat, sleep, work, and even make love like clockwork. Zamyatin’s fable isn’t anti-utopian, but anti-anti-utopian. Like his protagonist, mathematician and rocket designer D-503, the author longed to see war, hunger, and poverty eradicated through collectivism… but not at the cost of spontaneity and freedom of choice. Their ancestors were right to invent a more equitable social order, the female revolutionist I-330 tells D-503. But afterward, she adds (speaking in a mathematics-inflected register intended to subvert D-503’s lifelong conditioning) “they believed that they were the final number — which doesn’t exist in the natural world, it just doesn’t.”

A version of this item appeared in the Boston Globe in July 2006.

On his or her birthday, HiLobrow irregularly pays tribute to one of our high-, low-, no-, or hilobrow heroes. Also born this date: Langston Hughes.