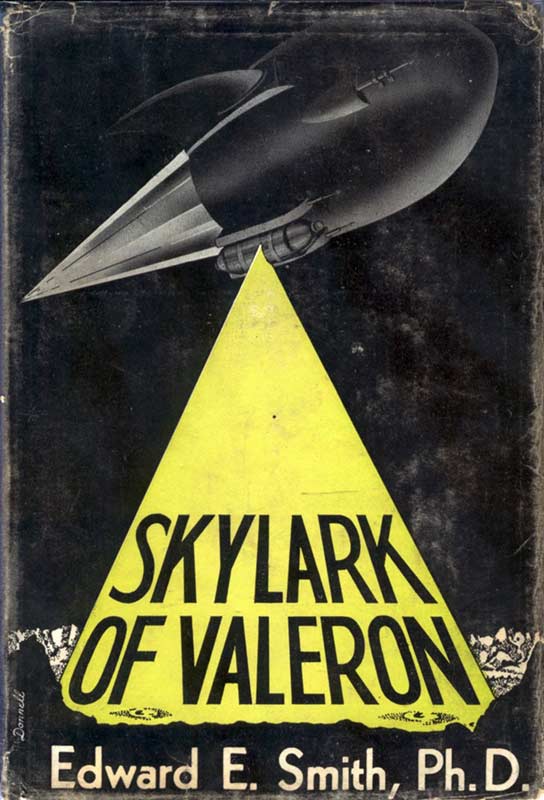 Though he wasn’t nearly as talented a stylist, nor as deep a thinker as, say, his exact contemporaries Olaf Stapledon, Thea von Harbou, and Karel Čapek, E.E. “DOC” SMITH (1890-1965) was something wonderful that these Radium Age sf authors were not: a pulp writer. He earned a living not as a litterateur, but as a food engineer; some claim that he developed the first process for making powdered sugar adhere to doughnuts. Pulp writers whose prose is particularly rococo can be forgiven any shortcomings — and Smith’s imagination was beyond far-out. Though not quite the first “space opera” writer, he almost single-handedly popularized that subgenre — not to be confused with “planetary romance” — via his epic Skylark (serialized 1928-65) and Lensman (1937-50) series. In these eleven books, innumerable stories, and his novel Spacehounds of IPC (serialized in ’31), Smith dreamed up: a future in which space travel was common; whiz-bang technology that would inspire stealth fighters, C3-based warfare, and the Strategic Defense Initiative; and the Galactic Patrol, an interstellar law-enforcement agency and military force without which we mightn’t have, e.g., Iain M. Banks’ “Culture” novels, or Orson Scott Card’s Ender’s Game. Also: no Smith, no Star Wars.

READ MORE about members of the Modernist Generation (1884-93).