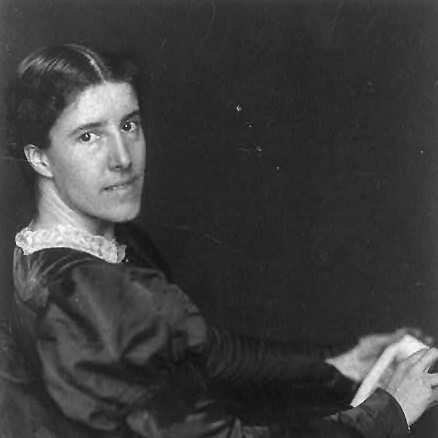 “Bless her little heart!” said he with a big hug, “she shall be as sick as she pleases!”

Like many heroes, CHARLOTTE PERKINS GILMAN (1860-1935) did and was a great deal more than just that one thing we all know about. She went to RISD, did you know? She was Harriet Beecher Stowe’s niece, she married her first cousin after divorcing her first husband, she wrote a utopian novella about an all-female society called Herland, and she wrote in her eminently rational suicide note that she “preferred chloroform to cancer,” did you know?

What I know you know is that it’s really all about “The Yellow Wallpaper,” literature’s best (and perhaps only) feminist horror story, a story Poe or Lovecraft would be happy to have written. But only Gilman could have pulled off the world’s most moronic patronizing patriarch (that tone, that TONE!), not least because “The Yellow Wallpaper” was based on her real experience undergoing “The Rest Cure” at the no doubt moronic hands of nerve specialist Dr. Weir Mitchell, whose prescription of milk, isolation, total bed rest, and above all NO WRITING was applied to Virginia Woolf as well as to Charlotte Perkins Gilman.

The idea that other people can drive you crazy isn’t very fashionable anymore. Think of David Foster Wallace’s “Depressed Person,” for instance, who clearly has only herself to blame (and blame, and blame). Or, of course, think of all the biochemical scapegoats we now know we have within us to humbly and mutely accept all responsibility. First-wave feminist Charlotte Perkins Gilman suggests (usefully, I think) that perhaps it’s not us. Perhaps it’s them. Or him. Or her. Who is driving us crazy.