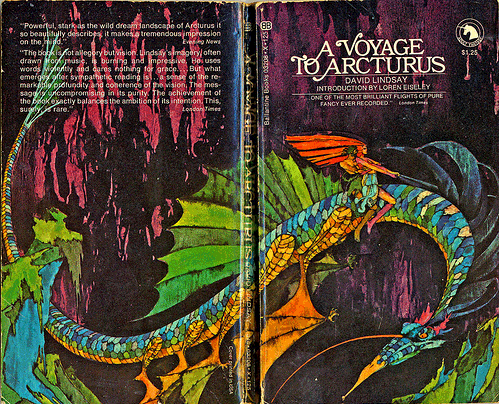 In 1920, the Anglo-Scot ex-insurance man DAVID LINDSAY (1876–1945) completed an existential science fiction novel, A Voyage to Arcturus. In it, two men — the giant Maskull and the thin, intense Nightspore — are taken from Earth to the planet Tormance by Krag, a mysterious figure who is a residue of the true godhead, Muspel, unassimilated by the false creations of Tormance’s demiurge, Crystalman. Reality is fluid, on this planet; in fact, it transpires that the very notion of an absolute reality is merely a comforting illusion. Each chapter introduces a new moral order, persuades us to believe in it — then mocks us for doing so. This bewildering book, which was inspired by Nietzsche and Schopenhauer, sold a mere 596 copies. Lindsay’s subsequent books — including the ghost story The Haunted Woman, the swashbuckler M. de Mailly, and Devil’s Tor — were also flops. Just before WWII, Lindsay gave up writing and opened a boarding house in Brighton; the Germans dropped a bomb on it. Just before Lindsay died, his fortunes began to change: C.S. Lewis declared that Lindsay was the “real father” of his “Perelandra” sci-fi trilogy: “He is the first writer to discover what ‘other planets’ are really good for in fiction… To construct plausible and moving ‘other worlds’ you must draw on the only real ‘other world’ we know, that of the spirit.” J.R.R. Tolkien was also a fan. In 1946, Victor Gollancz reissued Arcturus; in 1968, Ballantine reissued it as a mass market paperback (with a Bob Pepper cover); and in 1979, critic Harold Bloom published his first and only novel: a sequel to Arcturus. Since then, Lindsay has returned to obscurity.

On his or her birthday, HiLobrow irregularly pays tribute to one of our high-, low-, no-, or hilobrow heroes. Also born this date: Edward Thomas and Robyn Hitchcock.