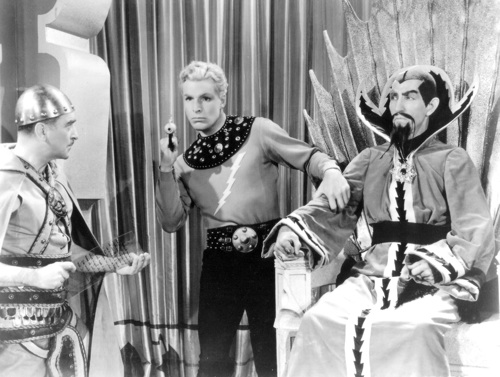 Hawaiian-born athlete and actor BUSTER CRABBE (Clarence Crabbe II, 1908-83) won a bronze medal for swimming in the 1928 Olympic Games, and a gold in 1932; he was also the University of Southern California’s first All-American swimmer. In 1933, he played the title character in the serial Tarzan the Fearless; it was a lousy imitation of his pal Johnny Weissmuller’s previous portrayal of the character, but Crabbe went on to become one of the great action heroes of 1930s-40s cinema. Not only did he play the title role in the 13-part 1936 serial based on the Flash Gordon comic strip and its two sequels, but during his 100-plus film career he’d also portray Buck Rogers and (36 times!) the outlaw Billy the Kid. Flash Gordon was the first outright “sci-fi” serial; Crabbe’s vigorous, fun-to-watch but two-dimensional acting, not to mention the serial’s schlocky production values — Zarkov’s base was the watchtower from Frankenstein, the idol of the Great God Tao was the Egyptian idol from The Mummy, etc. — so horrified literate, thoughtful young science fiction authors that within a couple of years they would hijack the pulp magazine Astounding and launch sf’s anti-lowbrow Golden Age. Years later, middlebrow auteurs George Lucas and Stephen Spielberg, who grew up watching Flash Gordon on TV, paid homage (the kind vice pays to virtue) to Crabbe with their Star Wars and Indiana Jones franchises. At 75, Crabbe died from a heart attack after tripping over a wastebasket.

On his or her birthday, HiLobrow irregularly pays tribute to one of our high-, low-, no-, or hilobrow heroes. Also born this date: Alejandro Jodorowsky and Alfred Adler.