ALL INSTALLMENTS SO FAR
***
Assumption of a Noted Garment

The tale tells that all was dark there, and Jurgen could see no one. But the cave stretched straight forward, and downward, and at the far end was a glow of light. Jurgen went on and on, and so came presently to a centaur; and this surprised him not a little, because Jurgen knew that centaurs were imaginary creatures.

Certainly they were curious to look at: for here was the body of a fine bay horse, and rising from its shoulders, the sun-burnt body of a young fellow who regarded Jurgen with grave and not unfriendly eyes. The Centaur was lying beside a fire of cedar and juniper wood; near him was a platter containing a liquid with which he was anointing his hoofs. This stuff, as the Centaur rubbed it in with his fingers, turned the appearance of his hoofs to gold. 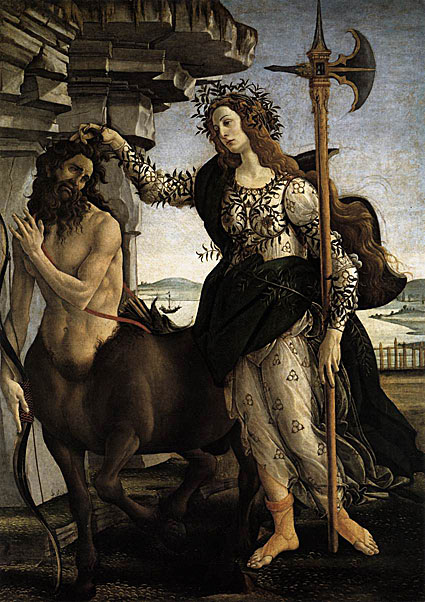 “Your protasis is not good Greek,” observed the Centaur, “because in Hellas we did not make such reservations. Besides, it is not so much my origin as my destination which concerns you.”

“Well, friend, and whither are you going?”

“To the garden between dawn and sunrise, Jurgen.”

“Surely, now, but that is a fine name for a garden! and it is a place I would take joy to be seeing.”

“Up upon my back, Jurgen, and I will take you thither,” says the Centaur, and heaved to his feet. Then said the Centaur, when the pawnbroker hesitated: “Because, as you must understand, there is no other way. For this garden does not exist, and never did exist, in what men humorously called real life; so that of course only imaginary creatures such as I can enter it.”

“That sounds very reasonable,” Jurgen estimated: “but as it happens, I am looking for my wife, whom I suspect to have been carried off by a devil, poor fellow!”

And Jurgen began to explain to the Centaur what had befallen.

The Centaur laughed. “It may be for that reason I am here. There is, in any event, only one remedy in this matter. Above all devils — and above all gods, they tell me, but certainly above all centaurs — is the power of Koshchei the Deathless, who made things as they are.”

“It is not always wholesome,” Jurgen submitted, “to speak of Koshchei. It seems especially undesirable in a dark place like this.”

“None the less, I suspect it is to him you must go for justice.”

“I would prefer not doing that,” said Jurgen, with unaffected candor.

“You have my sympathy: but there is no question of preference where Koshchei is concerned. Do you think, for example, that I am frowzing in this underground place by my own choice? and knew your name by accident?”

Jurgen was frightened, a little. “Well, well! But it is usually the deuce and all, this doing of the manly thing. How, then, can I come to Koshchei?”

“Roundabout,” says the Centaur. “There is never any other way.”

“And is the road to this garden roundabout?”

“Oh, very much so, inasmuch as it circumvents both destiny and common-sense.”

“Needs must, then,” says Jurgen: “at all events, I am willing to taste any drink once.”

“You will be chilled, though, traveling as you are. For you and I are going a queer way, in search of justice, over the grave of a dream and through the malice of time. So you had best put on this shirt above your other clothing.”

“Indeed it is a fine snug shining garment, with curious figures on it. I accept such raiment gladly. And whom shall I be thanking for his kindness, now?”

“Well, then, friend Nessus, I am at your service.”

And in a trice Jurgen was on the Centaur’s back, and the two of them had somehow come out of the cave, and were crossing Amneran Heath. So they passed into a wooded place, where the light of sunset yet lingered, rather unaccountably. Now the Centaur went westward. And now about the pawnbroker’s shoulders and upon his breast and over his lean arms glittered like a rainbow the many-colored shirt of Nessus. 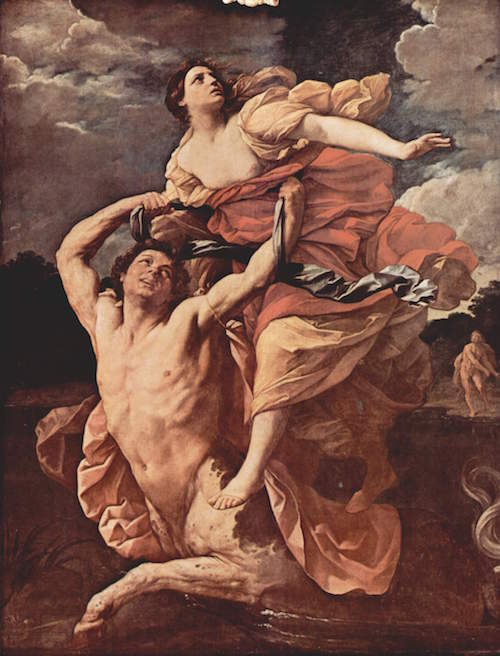 For a while they went through the woods, which were composed of big trees standing a goodish distance from one another, with the Centaur’s gilded hoofs rustling and sinking in a thick carpet of dead leaves, all gray and brown, in level stretches that were unbroken by any undergrowth. And then they came to a white roadway that extended due west, and so were done with the woods. Now happened an incredible thing in which Jurgen would never have believed had he not seen it with his own eyes: for now the Centaur went so fast that he gained a little by a little upon the sun, thus causing it to rise in the west a little by a little; and these two sped westward in the glory of a departed sunset. The sun fell full in Jurgen’s face as he rode straight toward the west, so that he blinked and closed his eyes, and looked first toward this side, then the other. Thus it was that the country about him, and the persons they were passing, were seen by him in quick bright flashes, like pictures suddenly transmuted into other pictures; and all his memories of this shining highway were, in consequence, always confused and incoherent.

He wondered that there seemed to be so many young women along the road to the garden. Here was a slim girl in white teasing a great brown and yellow dog that leaped about her clumsily; here a girl sat in the branches of a twisted and gnarled tree, and back of her was a broad muddied river, copper-colored in the sun; and here shone the fair head of a tall girl on horseback, who seemed to wait for someone: in fine, the girls along the way were numberless, and Jurgen thought he recollected one or two of them.

But the Centaur went so swiftly that Jurgen could not be sure.

* Koshchei the Deathless — Mr. Cabell, in this and other romances, seems to use Koshchei as the supreme deity of the universe, the universal demiurge, the god of things as they are. In Russian folk-lore, Koshchei is the personification of evil, appearing sometimes in human shape and sometimes as a snake.

* Nessus — The shirt of Nessus, which Jurgen so carelessly dons, is regarded as a source of misfortune from which there is no escape. Hercules ordered Nessus, the centaur, to carry his wife, Dejanira, across a river. The centaur, midway across the stream, attacked the woman, and Hercules shot him with a poisoned arrow. The dying Nessus, in order to be revenged, gave Dejanira his tunic, steeped in his poisoned blood, saying that the person to whom she gave it would love her exclusively. Dejanira gave it to her husband, who was devoured by the poison as soon as he put it on; so that, after enduring great agony, the hero threw himself on a funeral pile and was consumed.