This installment of Another Corporate Death is a reboot of a Chekhov short story, Death of a Civil Servant. Chekhov’s concerns with embraced authority and the consequences of the disconnect between intent and reception seem well-suited to modern corporate relationships. Perhaps a future collection? 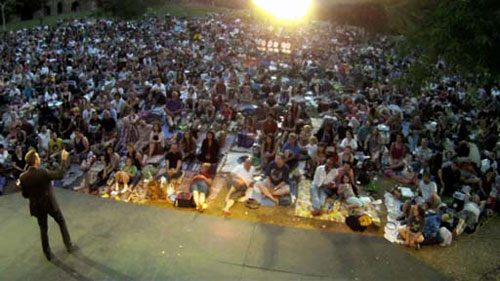 Another Corporate Death: Ed and Ellen

One beautiful July night, longtime General Mills chemical engineer Ed Stanton was sitting in the long grass, enjoying Shakespeare in the Park and thinking of the eternal human connection across generations and countries when suddenly he sneezed. Normally Ed took care to raise his shoulder to his nose the instant he felt a sneeze coming on, but his hands were just now holding a beer and a fully-loaded Italian sausage, and it was all he could do to not spill anything.

Looking up, he was relieved that Hamlet continued uninterrupted (the play and the man, Ed considered), but then he saw the woman in front of him reaching for her purse and wiping the back of her neck with a tissue. As he prepared an apology, Ed recognized with horror the carefully-shaped blonde curls of Ellen McDonic, COO of General Mills North America. Leaning in, so as not to disturb anyone nearby whose opinions Ellen may have cared greatly about, Ed whispered, “I’m very sorry, Ms. McDonic. I honestly had no intention of…” She waved the tissue once without looking at him and said, “Alright.”

Ed realized that she had not seen his beer and Italian Sausage and so would have no idea why he had not covered his face. Needing her to turn around, he coughed and reverently asserted, “Ms. McDonic, I really have to apologize to you for that thoughtless sneeze.”

“Shhhhh!” she said, turning briefly, just enough to see his face, but clearly not catching even a glimpse of his food and drink. Between acts, Ed found her in line for the ladies’ room, and continuing to hold the beer and his dinner, barely making eye contact, mumbled politely, “Very sorry for sneezing on your neck,” while holding his hands up to illustrate his helplessness.

“It’s fine. Please leave me alone,” she pleaded, rolling her eyes at a carefully-dressed companion, who stood next in line.

Ed thought, “She says it’s fine, but she will tell her family and colleagues about the stupid engineer who sneezed on her,” and he wondered if his co-workers would have heard about it by Monday. Ed checked Ellen’s Twitter account, and though she hadn’t yet mentioned anything about his idiotic move, it wasn’t a good sign that she apparently didn’t enjoy Hamlet.

Monday came, and Ed stopped by the downtown HQ early to see if Ellen McDonic would be arriving at 7:15am, as she was known to do. Catching sight of her at the security desk, Ed very quickly approached and then spoke slowly (which struck all there as unnatural), saying, “Ms. McDonic, Ma’am, I beg you, please accept my apologies for the unfortunate incident while watching Shakespeare and eating.”

She had already had a long day, and replied, “You’re joking! This is a joke,” and she stared at him. Ed was in terror and could not speak immediately, but finally gasped, “No! No-ho! I am not joking! Why would I, it’s not funny!” Ed could see that Security was scrutinizing him closely, even though they knew him well. He collected himself and humbly muttered, “I am very, very sorry,” before walking away.

Ed was supposed to have sex with his wife Carol that night, but he worried that with his recent trouble, he would not be able to — these concerns turned out to be baseless, and Ed had terrific sex with his wife. He then told her about the security desk, and she asked how many levels separated him and Ellen McDonic. Ed thought for a moment, counting on his fingers. Six, he said. Carol winced, and suggested that he clear things up before Ellen had a chance to make a careless mistake that would affect their whole family. Ed thought that unlikely, though McDonic did have a reputation as a warhorse.

The next morning at 7:00am, Ed was waiting at the security desk when Ellen McDonic arrived. As she walked across the sunlit lobby, Ed gently neared her and shakily asked, “Excuse me, Ms. McDonic, just a moment of your time to explain myself and apologize for my subsequent behavior these last days?”

She screamed, “Get away from me!” and made wide, pleading eyes at Security. Ed’s face paled, and he whispered, “What?” She yelled, “Help!”

Ed felt his stomach rise and fall, as if he were on a roller coaster. He walked out the revolving doors into the growing day, and found himself in a yellow taxi on the way home. When he got there, Ed opened the front door, laid down on the living room sofa, and died.