In City on a Spill, HILOBROW’s Joshua Glenn imagined what would happen if a major oil spill flooded New England. Inspired by data visualization imagery that weirdly demonstrated the extent of the ongoing Gulf disaster by superimposing the flow on a map of Boston, Glenn followed the visualization home, and was last seen trapped in a dubious redoubt atop a local liquor store. Years later, the story has settled into the sediment of myth, inscribed in the DNA of every surviving anaerobic mutant. 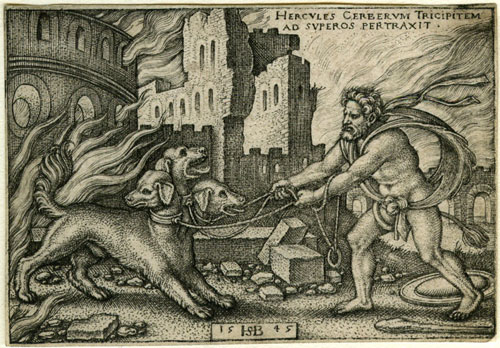 Not all underground rivers are the Styx. But each boasts its own personal Cerberus, waiting patiently on the far bank. Perhaps you have wondered what you would say, if confronted with the beast? Would you whisper him well, lull him with song, prove to the Lord of the Underworld that you could best his pet? Perhaps; perhaps not. An idle thought for an idle moment; the era of the ancients is long past. You have no wish to make such a journey. You are content to live within time, to surrender your claim on mythology.

No matter —it will come to you.

The oil came to us in the summer of 2010. More valuable than money, but only in its proper measure. We had become Midas, gilder of worlds. Where gold flows to flesh, and currency turns to current, death follows.

It traced the outline of the harbor but soon crept landward — slowly, inexorably, unavoidably. Its time became ours; the compressive millennia flooded our water clocks and slowed them with an ancient, sobbing knell. When the world was young, and hardly a world, these had been trees and leaves, feeding on the sun, sinking back into the rich, volcanic soil, springing anew in their kind. Spring was only a verb then, there were no seasons, nothing yet so rational and contained. There was only what was, and its becoming. 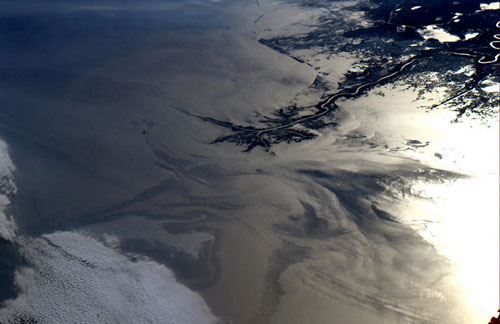 Time appeared, accelerated; fires were fewer, the planet cooled. We had not yet reached history, nothing then living would recognize its claim. But there came a day when the ancient plants grew no taller, and their roots and remains began to sink, began to collect together; began, slowly, to press.

Above, cataclysms swept the surface. Dinosaurs ruled their reptilian domain. Asteroids missed, or crashed down in disgrace. Complexities took to the air, scrabbled on land, or drifted in the sea; tentacled — monstrous. Underneath, the pressure only increased: “more weight.”

Then: a subtle alteration. Subtle at first. Instead of being at the mercy of long-tested forces, some began to test their mercy outwards. They captured fire. They interfered with fauna, then flora. They carved and scraped and pressed back, and it suited the world to follow, for a time. They attempted to cultivate, to manage, to cull. Mercies became more delicate; their application, more brutal. History had begun.

And something shifted below. What were once ancient trees had become soft, sibilant. Many-celled, they adhered to each other out of memory, although the memory of what had been long forgotten, if it was ever known.

Slowly, eventually, inevitably: the planet was made porous, and we tapped the ancient wells. We found it, we needed it; we fit ourselves to its purpose. We altered the land, we altered the sea. It, escaped, altered the air. Fire was implicit, and sometimes overt. But we had entered history, and had determined the proper measures for things. Things to manipulate. Things to win. Things to pleasure. Things to think. We were eager, impatient. As is everything, in its way.

We — slipped. It was perhaps necessary, to slip. All our stories told of it, had we but read closely enough. Some had, but it seemed too fantastical, too neat; the analysis was linked to the semantic web but with archaic syntax, where it hovered, just below search. We had surfaced the underground river and were flooded into myth. No one wanted to believe it, but the clues were everywhere and unavoidable. Our rational machinery simply ceased to work. We were powerless to stop or stem or alter the flow of the ancients’ whims, whims unavailable even to themselves. Being, yet devoid of desire —that was the oil spill. 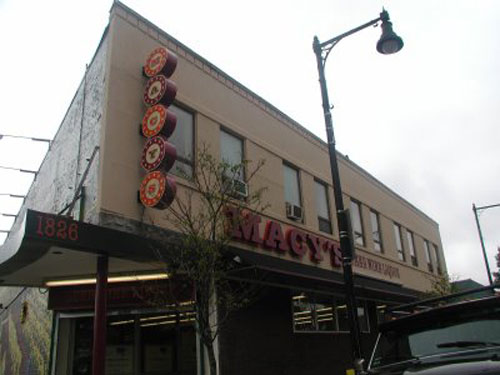 That is the oil spill. We heeded no warnings, because after all, what could it matter? Surrounded by enough oil to power our cars, probably forever, we were immobilized in an ironic displacement of excess. We still hoped; hope springs eternal. But that’s merely a myth. Time was over, history had stopped. We hoped for an army helicopter as our airborne savior. We hoped; but we knew — our Charon would be of quite different character. As would our eternity.

When the oil flooded the biotech companies along the river, it was joined by a young cousin. Synthetic, eager to be out in the world and prove itself, it amplified and augmented the flow. We might have capped the well. But we couldn’t contain the cells. We had thought to make our own: an offering of our most valued possession, our debt come due, our anoxic fire. Too late, we found it doesn’t work that way.

Soon enough our surround will explode into that other stolen gift. Alas! We were the New Prometheans, and make no mistake, we will be paying the highest possible price. We have no weapons with which to subdue the three-headed beast looming on the inferno’s horizon, just our wits and what words they may briefly conjure. I do not know who, if any, will sing our journey home, nor upon what lyre. The banks of the ancient burning river have risen up to meet us, and we are out of time. Our crossing starts: now.