ALL INSTALLMENTS SO FAR
***
The Desire of Anaïtis

And again Koshchei waved his hand. Then came to Jurgen a woman who was strangely gifted and perverse. Her dark eyes glittered: upon her head was a net-work of red coral, with branches radiating downward, and her tunic was of two colors, being shot with black and crimson curiously mingled.

And Anaïtis also had forgotten Jurgen, or else she did not recognize him in this man of forty and something: and again belief awoke in Jurgen’s heart that this was the only woman whom Jurgen had really loved, as he listened to Anaïtis and to her talk of marvelous things. 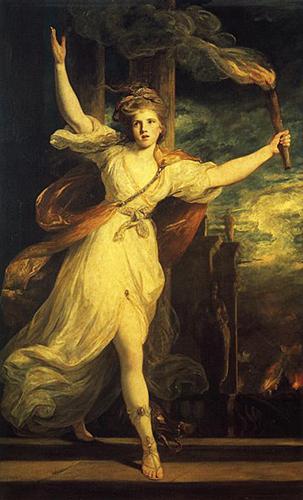 Of the lore of Thaïs she spoke, and of the schooling of Sappho, and of the secrets of Rhodopê, and of the mourning for Adonis: and the refrain of all her talking was not changed. “For we have but a little while to live, and none knows his fate thereafter. So that a man possesses nothing certainly save a brief loan of his own body: and yet the body of man is capable of much curious pleasure. As thus and thus,” says she. And the bright-colored pensive woman spoke with antique directness of matters that Jurgen, being no longer a scapegrace of twenty-one, found rather embarrassing.

“Come, come!” thinks he, “but it will never do to seem provincial. I believe that I am actually blushing.” 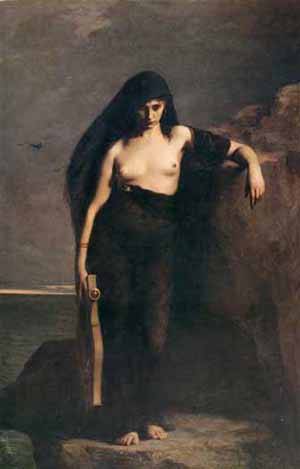 Aloud he said: “Sweetheart, there was — why, not a half-hour since! — a youth who sought quite zealously for the over-mastering frenzies you prattle about. But, candidly, he could not find the flesh whose touch would rouse insanity. The lad had opportunities, too, let me tell you! Hah, I recall with tenderness the glitter of eyes and hair, and the gay garments, and the soft voices of those fond foolish women, even now. But he went from one pair of lips to another, with an ardor that was always half-feigned, and with protestations which were conscious echoes of some romance or other. Such escapades were pleasant enough: but they were not very serious, after all. For these things concerned his body alone: and I am more than an edifice of viands reared by my teeth. To pretend that what my body does or endures is of importance seems rather silly nowadays. I prefer to regard it as a necessary beast of burden which I maintain, at considerable expense and trouble. So I shall make no more pother about it.”

But then again Queen Anaïtis spoke of marvelous things; and he listened, fair-mindedly; for the Queen spoke now of that which was hers to share with him.

“Well, I have heard,” says Jurgen, “that you have a notable residence in Cocaigne.”

“But that is only a little country place, to which I sometimes repair in summer, in order to live rustically. No, Jurgen, you must see my palaces. In Babylon I have a palace where many abide with cords about them and burn bran for perfume, while they await that thing which is to befall them. In Armenia I have a palace surrounded by vast gardens, where only strangers have the right to enter: they there receive a hospitality that is more than gallant. In Paphos I have a palace wherein is a little pyramid of white stone, very curious to see: but still more curious is the statue in my palace at Amathus, of a bearded woman, which displays other features that women do not possess. And in Alexandria I have a palace that is tended by thirty-six exceedingly wise and sacred persons, and wherein it is always night: and there folk seek for monstrous pleasures, even at the price of instant death, and win to both of these swiftly. Everywhere my palaces stand upon high places near the sea: so they are beheld from afar by those whom I hold dearest, my beautiful broad-chested mariners, who do not fear even me, but know that in my palaces they will find notable employment. For I must tell you of what is to be encountered within these places that are mine, and of how pleasantly we pass our time there.” Then she told him.

Now he listened more attentively than ever, and his eyes were narrowed, and his lips were lax and motionless and foolish-looking, and he was deeply interested. For Anaïtis had thought of some new diversions since their last meeting: and to Jurgen, even at forty and something, this queen’s voice was all a horrible and strange and lovely magic. “She really tempts very nicely, too,” he reflected, with a sort of pride in her.

Then Jurgen growled and shook himself, half angrily: and he tweaked the ear of Queen Anaïtis.

“Sweetheart,” says he, “you paint a glowing picture: but you are shrewd enough to borrow your pigments from the day-dreams of inexperience. What you prattle about is not at all as you describe it. You forget you are talking to a widely married man of varied experience. Moreover, I shudder to think of what might happen if Lisa were to walk in unexpectedly. And for the rest, all this to-do over nameless delights and unspeakable caresses and other anonymous antics seems rather naïve. My ears are beset by eloquent gray hairs which plead at closer quarters than does that fibbing little tongue of yours. And so be off with you!”

With that Queen Anaïtis smiled very cruelly, and she said: “Farewell to you, then Jurgen, for it is I that am leaving you forever. Henceforward you must fret away much sunlight by interminably shunning discomfort and by indulging tepid preferences. For I, and none but I, can waken that desire which uses all of a man, and so wastes nothing, even though it leave that favored man forever after like wan ashes in the sunlight. And with you I have no more concern, for it is I that am leaving you forever. Join with your graying fellows, then! and help them to affront the clean sane sunlight, by making guilds and laws and solemn phrases wherewith to rid the world of me. I, Anaïtis, laugh, and my heart is a wave in the sunlight. For there is no power like my power, and no living thing which can withstand my power; and those who deride me, as I well know, are but the dead dry husks that a wind moves, with hissing noises, while I harvest in open sunlight. For I am the desire that uses all of a man: and it is I that am leaving you forever.”

Said Jurgen: “I could not see all this in you, not quite all this, because of a shadow that followed me. Now it is too late, and this is a sorrowful thing which is happening. I am become as a puzzled ghost who furtively observes the doings of loud-voiced ruddy persons: and I am compact of weariness and apprehension, for I no longer discern what thing is I, nor what is my desire, and I fear that I am already dead. So farewell to you, Queen Anaïtis, for this, too, is a sorrowful thing and a very unfair thing that is happening.”

Thus he cried farewell to the Sun’s daughter. And all the colors of her loveliness flickered and merged into the likeness of a tall thin flame, that aspired; and then this flame was extinguished.

* Thaïs — Thaïs was an Athenian courtesan who induced Alexander to set fire to the palace of the Persian king at Persepolis. (There is no early support for this tale.)

* Sappho — Sappho, who lived at Lesbos in the seventh century B.C., is generally considered the greatest of woman poets. It is thought that she was homosexual and led a very licentious life.

* Rhodopê — Rhodopê was a celebrated Greek courtesan of Thracian origin, and a fellow slave of Æsop. She was loved by Sappho’s brother, and was the victim of a poem by Sappho.

* Babylon — Perhaps Anaïtis refers here to the sacred prostitution practiced in this city. Frazer (in The Golden Bough) says, “in Babylon every woman, whether rich or poor, had once in her life to submit to the embraces of a stranger at the temple of Mylitta, and to dedicate to the goddess the wages earned by this sanctified harlotry.”

* Armenia — Here was the shrine of Anaïtis herself, where she appeared under her own name, and not that of some other love goddess.

* Paphos — Paphos was the chief seat of the worship of Aphrodite, who was said to have landed at this place after her birth among the waves. The image of the goddess was a conical stone, which was anointed with oil at the time of worship.

* Amathus — Amathus, a town in Cypress, had a celebrated temple of Aphrodite. The Cyprian Aphrodite was two-sexed, and represented by the image of a bearded woman.

* Alexandria — In this city there was such a temple to Cotytto as is here described.