Corporate personhood has enjoyed increased attention since the Citizens United decision. People tend to be very for or very against it. Tea Party, Occupy… it’s a central issue and a basic question about the nature of our progeny and ourselves: what kind of gods are we? Another Corporate Death is an emerging series of short stories that takes as its subject an alternative understanding of the complexities of corporate personhood. Each entry alludes to, or revolves around, a loss of life. 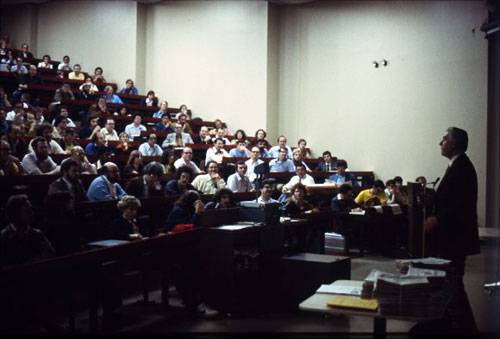 Another Corporate Death: Aaron and Janice

Aaron addressed the crowd from the floor in front of the stage, as he and Janice had decided. This was a no-brainer, one of the simplest ways to forge that absolutely essential emotional connection. Aaron’s sleeves were rolled up, he wore a carefully loosened tie and no jacket, and he had practiced his presentation so many times that it sounded like he was “just talking.” He was prepared for some very tough questions, and any answers he would have to improvise would truly be coming from a place of deep knowledge and an absolutely personal connection. This was the kickoff of Enesys’ Operations Transformation, and as SVP Aaron Kischler admitted, he was the only one who could do it.

When she heard him say that the night before, Janice had mixed feelings. Aaron had lost his wife of 16 years that week, and was very strongly considering a flight home. He was an absolute wreck, trying to decide if he should stay for what was already an impossibly difficult task. Operations had been a mess since Bill Hodgen left, and now with the reorg, many of these people would not have a home at Enesys for much longer. Aaron took coaching well, but still. He needed to hear it from Janice. He called her room and asked, “Do you really think I can do this?”

“Only you know the answer to that,” she replied, displaying the keen senses of empathy and risk avoidance that made her one of the most sought-after change-management consultants in the energy industry. She would later relate to her peers at various symposia that the SVP decided that very night to turn some of his grieving toward his powers of personal connection, in what could most accurately be called cathartic empathos. And while “fortunate” wasn’t the right word, Janice believed that everything happens for a reason. There was something serendipitous about the insertion of such a powerful dynamic into a situation this challenging. She imagined that it might take years and years, a career, to conceive of a way to generate, or even approximate, this bounty of emotional honesty without such a horrible and unpredictable antecedent.

Aaron stood now on the auditorium floor, eyes locked and voice strong. “Change,” he said, “is inevitable.” He continued to put word after word, and gave what is considered if not the most perfect, then certainly the most passionate and generally compelling presentation in the recent memory of anyone in Enesys’ Operations function.