Children of the Volcano 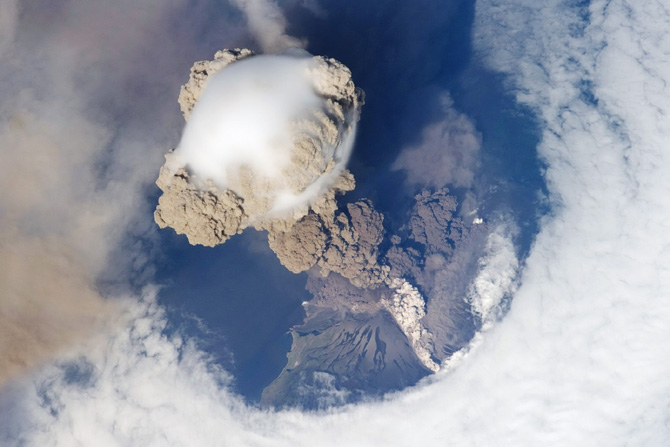 As the Landnámabok tells it, in 1010 AD the sorcerers Hilmir and Hrafn moved in next to each other below the glacier on good flat land where they raised their sheep and chased the trolls from underneath their neighbors’ rocks. But one day there was smoke on the mountain and fire in the ice, and a flood came storming down from the glacier. Hrafn stood behind his walls of stone and threw spells to turn the waters away from his flocks towards Hilmir’s land. Hilmir stood on his roof and sang for all he was worth; but his spells were late and his runes weak, and the flood swept away his flocks, his rocks, his home. Hilmir took the whale’s road to Norway and his tale dropped from the sagas.

Not long after, Katla the witch built her hut with the help of her son Odd high on the slopes of the mountain. Odd was strong and simple and quick; when one of Hrafn’s sons tried to take a ewe from him, he swept off his hand with a scythe. Katla tried with all her spells to hide Odd, and although his sons’ wits were sundered Hrafn’s magic was strong and he saw through the witch’s rude magic. With a spell of his own —Odin’s magic, rune-magic — he set the very stones of Katla’s hut afire. But then a flame of gold flowing on the mountain sent an angry tide of cold water to quench the wereflames. Katla perished, whether of flame or flood none could tell. But Odd disappeared in the mist of ash, and his tale dropped from the sagas.

A thousand years later, Tinna Guðnasdottir, Odd’s great-grandaughter seven times over, sits in a boarding lounge in Schipol with her legs propped on her rolling suitcase and the fey glimmer of Spring’s late twilight on her face. She was due to leave for New York three days ago. But instead she’s still in Amsterdam, and she’s staring into the eyes of Neils Ullman —Neils of Minot, North Dakota, whom she had never met until yesterday. He was planning to backpack across India. But Neils isn’t so sure now — for in Tinna’s black eyes he spies glimmers of molten gold and storms of glass. Tinna taught him to say the name —Eyjafjallajökull— the syllables strangely soft and sharp like spells made not of runes but flowing fire and flood. And now he wants to see the land that his great-grandfather seven times over left so long ago when he swore off spellmaking and woolgathering and came over the whale’s road to Norway.

Continuing to cement his reputation as the digital impresario nonpareil, writer Robin Sloan threw together Ash Cloud Tales, a crowdsourced blog of microfiction tales about the disruptive eruption of Iceland’s Eyjafjallajökull volcano. Robin’s intention was to offer ash-displaced persons an outlet for their microfictional ruminations — even though I’m not stranded by vulcanism, I offered the tale above in supplication to Loki and the trolls under the mountains. Unfortunately the version I posted contained a few minor errors — thus the corrected version above. I encourage you to visit the original site and browse the tales collected there — a unique record of this encounter between primordial forces and global society. And if you’re so moved, add a tale of your own!