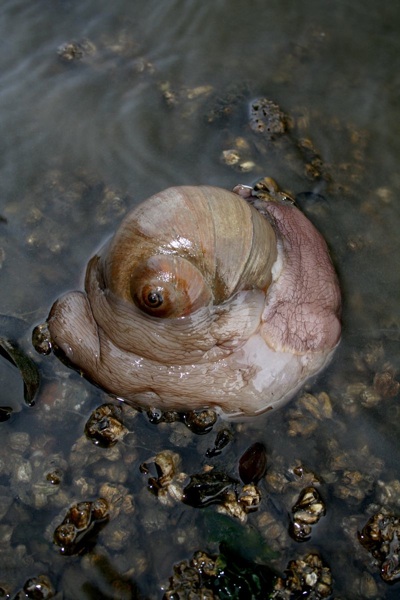 OLYMPIA, WASH.: Ernie says he can smell it, and I say he can’t, but he says that’s because I’m not from here. Not really. The Sound smells the same to me — vegetative, rotting and growing at the same time. The soft rain sizzles as it hits the surface of the water, and then there’s the hiss of it filtering past the barnacles encrusted on every slice of rock, pottery, and rusted metal that make up the floor of Budd Inlet.

“A fucking graveyard,” says Ernie into his phone, as he hauls one fist-sized moonsnail out of the muck with a sucking sound, then leaves it behind, the great muscular foot exposed and feebly undulating. I’ve hauled him down onto the beach, off his own pier for the first time in years, to gather some baseline data before the oil hits, but mostly he’s just on his phone, trading rumors of the damage hitting elsewhere. Here at the southernmost tip of the current, we’ll be the last hit.

“You people,” says Ernie, and it takes me a second to realize he’s not on the phone, “You come from California and Minnesota because you love the mountains and you love the water. And now look what happens.”

“I’m from Boston,” I say. I hear the chatter of a kingfisher that’s been working alongside us for an hour, kiting high in the air, then diving, over and over, without catching a single fish.

“What a waste of energy,” says Ernie.

A.E. Smith lives in Olympia, Washington, on an inlet of Puget Sound whose biggest threat at the moment is, thankfully, just the wastewater treatment plant. Her story was the winning entry in our fourth micro-fiction contest.

We’ll record “Sound Thinking” during our next podcast session, on June 11 — the theme of which is eco-catastrophes. HILOBROW will donate $100 to the Center for Biological Diversity in Smith’s honor. UPDATE: Ms. Smith has generously offered to match our donation to the CBD.

See All Posts by A.E. Smith