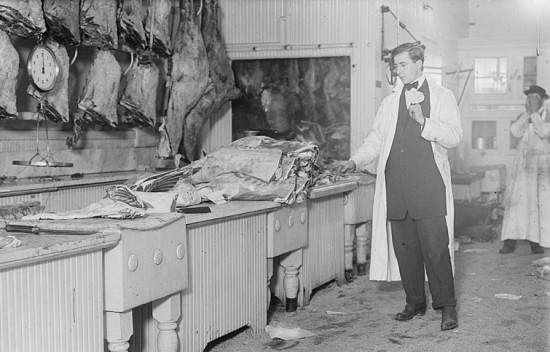 Jack LaViande spent his last day on Earth haggling over the price of meat.

At 9 am, he walked into Tuera’s, his local butcher shop. He stamped up to the counter, and rang the bell several times in quick succession. The infamous Tommi Tuera herself came over to assist.

“I was wondering what the going rate was for meat today?” Jack queried, his voice lifting as he removed his pork pie hat and wrung it in his hands.

Tommi sized up the balding man.

“Sir, you’ve gotta look at it from my angle. I’ve gotta break down the meat, pay for the electricity, and pay my employees. I’ve got too much overhead to buy meat for anything more than two-eighty,” she explained.

Jack unbuttoned his shirt cuffs. Rolling up his sleeves, he gave Tommi Tuera his hardest stare.

“Look, lady. Look at this arm. It’s worth at least $3.50. Look at this belly, my thighs. I’m well-marbled, like Kobe beef used to be. Your customers are gonna love me!”

“I’ve been prepping for this day for years. I’m not some wimp riding on lentils and soy. I’ve been drinking fresh milk by the gallon. And I’ll be flavorful. I eat a lot of garlic and rosemary.”

Tommi made a soft “hmmm”, and drew a set of calipers from the pocket of her apron. She came around the counter and grabbed hold of Jack. Deftly pinching and marking the angles on a sheet of butcher’s paper, she scratched a few calculations with grease pencil.

“Right, here’s the deal,” Tommi mused. “Your BMI is perfect for my clientele, and your feed is good. I can offer you $3 a pound.” Sensing Jack’s anger, she added, “But, if I can do a taste test first, and you’re really exceptional, I can offer you $4 a pound.”

“Sounds good to me. You’re gonna like it a lot, trust me.”

Tommi grabbed a length of rubber tubing out of her apron, and tied a tourniquet just above Jack’s right elbow. Once it numbed up, Tommi removed a thin wedge of meat from the forearm and popped it in her mouth.

Chewing with gusto, she closed her her eyes.

“Very good, sir. Shall I make the check out to your estate?”

“I’d like to donate the proceeds from the sale to charity, actually. Make it out to Human Rights Watch.”

TUCKER CUMMINGS is a writer whose current projects include The Strange Adventures of Margery Jones, a 365-part fiction serial about parallel universes. She also has a microfiction piece featured in The Thackery T. Lambshead Cabinet of Curiosities, available in bookstores this June. Hers was the winning story in our kooky-spooky fiction contest.