Survivor: The Island of Dr. Moreau 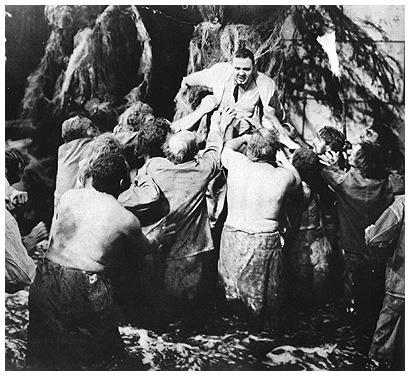 Imagine the scene of the Tribal Council if you can! We three blue-clad men, with our misshapen black-faced attendant, standing in a wide expanse of torchlit yellow dust under the blazing blue sky, and surrounded by this circle of crouching and gesticulating monstrosities,— some almost human save in their subtle expression and gestures, some like cripples, some so strangely distorted as to resemble nothing but the denizens of our wildest dreams; and, beyond, the reedy lines of a canebrake in one direction, a dense tangle of palm-trees on the other, separating us from the ravine with the huts, and to the north the muffled sound of the Pacific Ocean.

Presently Moreau sounded the great horn again, and at the sound of it all the Beast People writhed and grovelled in the dust. Then, slinking out of the canebrake, stooping near the ground and trying to join the dust-throwing circle behind Moreau’s back, came the Leopard-man. The last of the Beast People to arrive was the little Ape-man. The earlier animals, hot and weary with their grovelling, shot vicious glances at him.

“Cease!” said Moreau, in his firm, loud voice; and the Beast People sat back upon their hams and rested from their worshipping.

“Where is the Sayer of the Law?” said Moreau, and the hairy-grey monster bowed his face in the dust.

Forthwith all in the kneeling assembly began swaying from side to side and dashing up the sulphur with their hands,— first the right hand and a puff of dust, and then the left,— as the Sayer began once more to chant the strange litany. “This is part of the ritual of Tribal Council because fire represents life,” he moaned. “As long as you have fire, you are still in this game.” When he reached, “When your fire’s gone, so are you,” Moreau held up his lank white hand.

“Stop!” he cried, and there fell absolute silence upon them all.

I think they all knew and dreaded what was coming. I looked round at their strange faces. When I saw their wincing attitudes and the furtive dread in their bright eyes, I wondered that I had ever believed them to be men.

“The time to vote has come!” said Moreau.

“Who is he?” cried Moreau cracking his whip as the votes were tallied. I fancied the Hyena-swine looked dejected, so too did the Leopard-man. Moreau stopped, facing this creature, who cringed towards him with the memory and dread of infinite torment.

“Who is he?” repeated Moreau, in a voice of thunder.

“Evil is he who breaks the Law,” chanted the Sayer of the Law.

Moreau looked into the eyes of the Leopard-man, and seemed to be dragging the very soul out of the creature.

“Who breaks the Law —” said Moreau, taking his eyes off his victim, and turning towards us (it seemed to me there was a touch of exultation in his voice).

“Exile —Exile,” gabbled the Ape-man, as though the idea was sweet to him.

“Do you hear?” said Moreau, turning back to the criminal, “my friend —Hullo!”

For the Leopard-man, released from Moreau’s eye, had risen straight from his knees, and now, with eyes aflame and his huge feline tusks flashing out from under his curling lips — and produced the Immunity Idol.

There was a furious yelling and howling all about us. The whole crowd seemed to swing round in the direction of the glint of fire, and I too was swung round by the magnetism of the movement. In another second I was running, one of a tumultuous shouting crowd, in pursuit of the escaping Leopard-man.