ALL INSTALLMENTS SO FAR
***
The Faith of Guenevere

Very fair was this woman to look upon, with her shining gray eyes and small smiling lips, a fairer woman might no man boast of having seen. And she regarded Jurgen graciously, with her cheeks red and white, very lovely to observe. She was clothed in a robe of flame-colored silk, and about her neck was a collar of red gold. And she told him, quite as though she spoke with a stranger, that she was Queen Guenevere.

“But Lancelot is turned monk, at Glastonbury: and Arthur is gone into Avalon,” says she: “and I will be your wife if you will have me, Jurgen.” 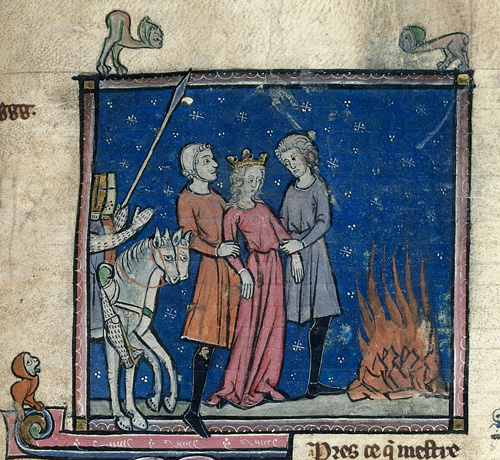 And Jurgen saw that Guenevere did not know him at all, and that even his name to her was meaningless. There were a many ways of accounting for this: but he put aside the unflattering explanation that she had simply forgotten all about Jurgen, in favor of the reflection that the Jurgen she had known was a scapegrace of twenty-one. Whereas he was now a staid and knowledgeable pawnbroker.

And it seemed to Jurgen that he had never really loved any woman save Guenevere, the daughter of Gogyrvan Gawr, and the pawnbroker was troubled.

“For again you make me think myself a god,” says Jurgen. “Madame Guenevere, when man recognized himself to be Heaven’s vicar upon earth, it was to serve and to glorify and to protect you and your radiant sisterhood that man consecrated his existence. You were beautiful, and you were frail; you were half goddess and half bric-à-brac. Ohimé, I recognize the call of chivalry, and my heart-strings resound: yet, for innumerable reasons, I hesitate to take you for my wife, and to concede myself your appointed protector, responsible as such to Heaven. For one matter, I am not altogether sure that I am Heaven’s vicar here upon earth. Certainly the God of Heaven said nothing to me about it, and I cannot but suspect that Omniscience would have selected some more competent representative.”

“It is so written, Messire Jurgen.”

Jurgen shrugged. “I too, in the intervals of business, have written much that is beautiful. Very often my verses were so beautiful that I would have given anything in the world in exchange for somewhat less sure information as to the author’s veracity. Ah, no, madame, desire and knowledge are pressing me so sorely that, between them, I dare not love you, and still I cannot help it!” 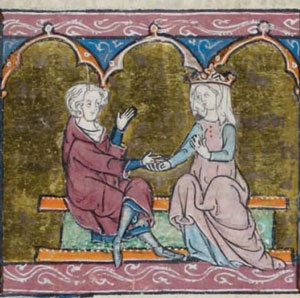 Then Jurgen gave a little wringing gesture with his hands. His smile was not merry; and it seemed pitiful that Guenevere should not remember him.

“Madame and queen,” says Jurgen, “once long and long ago there was a man who worshipped all women. To him they were one and all of sacred, sweet intimidating beauty. He shaped sonorous rhymes of this, in praise of the mystery and sanctity of women. Then a count’s tow-headed daughter whom he loved, with such love as it puzzles me to think of now, was shown to him just as she was, as not even worthy of hatred. The goddess stood revealed, unveiled, and displaying in all things such mediocrity as he fretted to find in himself. That was unfortunate. For he began to suspect that women, also, are akin to their parents; and are no wiser, and no more subtle, and no more immaculate, than the father who begot them. Madame and queen, it is not good for any man to suspect this.”

“It is certainly not the conduct of a chivalrous person, nor of an authentic poet,” says Queen Guenevere. “And yet your eyes are big with tears.”

“Why, man’s folly is indeed very great, Messire Jurgen, and the doings of this world are often inexplicable: and so does it come about that man can be saved by faith alone.”

“Ah, but this boy had lost his fellows’ cordial common faith in the importance of what use they made of half-hours and months and years; and because a jill-flirt had opened his eyes so that they saw too much, he had lost faith in the importance of his own actions, too. There was a little time of which the passing might be made not unendurable; beyond gaped unpredictable darkness; and that was all there was of certainty anywhere. Meanwhile, he had the loan of a brain which played with ideas, and a body that went delicately down pleasant ways. And so he was never the mate for you, dear Guenevere, because he had not sufficient faith in anything at all, not even in his own deductions.” 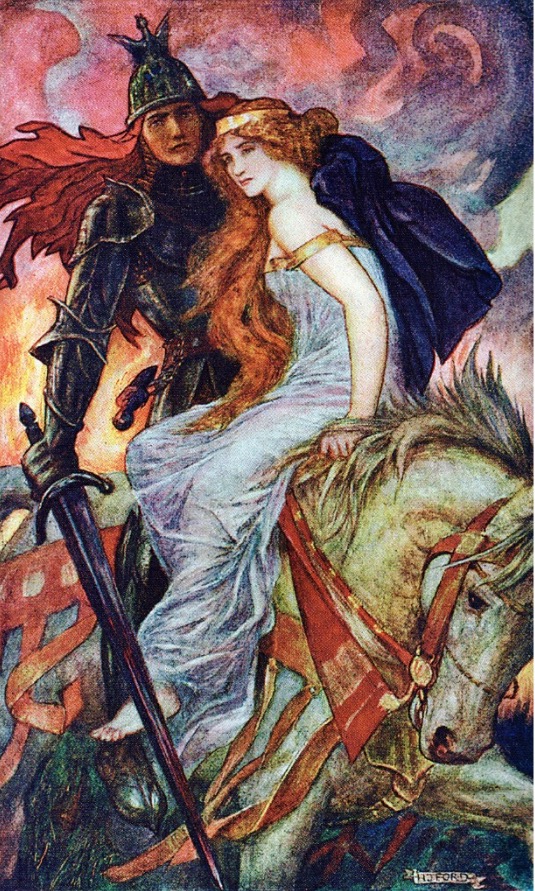 Now said Queen Guenevere: “Farewell to you, then, Jurgen, for it is I that am leaving you forever. I was to them that served me the lovely and excellent masterwork of God: in Caerleon and Northgalis and at Joyeuse Garde might men behold me with delight, because, men said, to view me was to comprehend the power and kindliness of their Creator. Very beautiful was Iseult, and the face of Luned sparkled like a moving gem; Morgaine and Enid and Viviane and shrewd Nimuë were lovely, too; and the comeliness of Ettarde exalted the beholder like a proud music: these, going statelily about Arthur’s hall, seemed Heaven’s finest craftsmanship until the Queen came to her daïs, as the moon among glowing stars: men then affirmed that God in making Guenevere had used both hands. And it is I that am leaving you forever. My beauty was no human white and red, said they, but an explicit sign of Heaven’s might. In approaching me men thought of God, because in me, they said, His splendor was incarnate. That which I willed was neither right nor wrong: it was divine. This thing it was that the knights saw in me; this surety, as to the power and kindliness of their great Father, it was of which the chevaliers of yesterday were conscious in beholding me, and of men’s need to be worthy of such parentage; and it is I that am leaving you forever.”

Said Jurgen: “I could not see all this in you, not quite all this, because of a shadow that followed me. Now it is too late, and this is a sorrowful thing which is happening. I am become as a rudderless boat that goes from wave to wave: I am turned to unfertile dust which a whirlwind makes coherent, and presently lets fall. And so, farewell to you, Queen Guenevere, for it is a sorrowful thing and a very unfair thing that is happening.”

Thus he cried farewell to the daughter of Gogyrvan Gawr. And instantly she vanished like the flame of a blown out altar-candle.

* Glastonbury — Glastonbury was the hermitage to which Lancelot retired after Arthur was dead and Guenevere had become a nun.

* Caerleon — This was the usual residence of King Arthur.

* Northgalis — This was a name for North Wales.