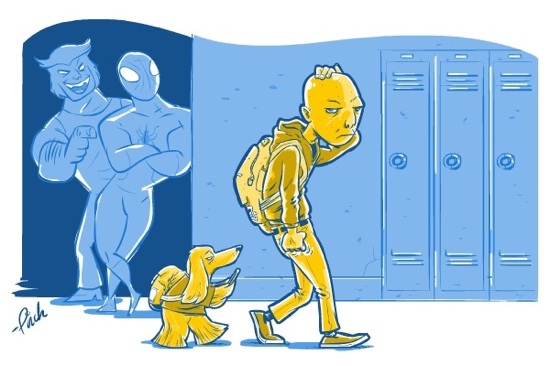 “Can you tell me why you’re here, Lesley?” the guidance counselor asks me in this voice like I just got off the short bus at the Special Olympics. I mean, come on, it’s moi. Stephen Hawking copies his homework from me.

I’ll tell you why I’m here. It wasn’t the money magnet or the earthquake maker I made in shop class. I’m here because of two syllables: Les-ley. Translated, it means Sissy McNoballs from Wussconsin. You try getting a ride on the screwnicorn in high school with a “Hi! I watch ‘Project Runway!’” name like that when everyone else is called Doc Savage or Spiderman or Wolverine. I mean, Wolverine? Seriously, who would want to hook up with a guy whose sideburns need a Brazilian? I asked Triplicate Girl out to the Radiohead concert — I scored 100 free tickets; I pwn Ticketmaster’s computers — and all three of her are basically washing their hair that night. So, mea culpa, I act out a little. But what’s a depilated teenager to do? So I’m thinking, do a name-change like in Superbad, except nothing as lame as McLovin’. I’m thinking The Defender maybe, or Lesley the Noble. Or maybe something from ancient Rome. Like, how cool would The Law sound in Latin? It’s like The Situation, but a lot cooler. Besides, there are cocker spaniels smarter than he is. I know, because I’ve made them.

Whatevs. From now on, my name is Lex.

Charles Pappas lives in Rochester, MN, where he writes on the trade show industry for Exhibitor Magazine. Previously, he was the investigative reporter for Yahoo Internet Life; he has published in Advertising Age, Smoke, POV, and Nerve. His first book, It’s a Bitter Little World, an ode to film noir language, was published in 2005.

Charles Pappas’ story was selected from a pool of over 225 short-short stories (about troubled and troubling superhumans) submitted to our first micro-fiction contest. The contest began on Jan. 26, 2010 and ended on Feb. 15.

HiLobrow editors Matthew Battles and Joshua Glenn invited Matthew De Abaitua, whose 2009 novel The Red Men was short-listed for the Arthur C. Clarke award, to be our third judge. About Pappas’ winning story, De Abaitua writes: “I loved so many of these stories, and winners in these matters are always arbitrary. ‘Can you tell me why you’re here, Lesley?’ was my favoured child for its shots of net slang, the glimpse of a contemporary reinvention of that well-known character which feels right, and the line about the spaniels. And the earlier line about Triplicate Girl.”

Congratulations to the winner! Pappas’ story will be recorded as part of the second episode of “Parallel Universe: Pazzo,” our Radium Age Science Fiction podcast; and he will receive a snazzy HILOBROW t-shirt.

In no particular order, the three honorable-mention stories are:

Congratulations to these authors, too! We’ll publish their stories next week.

HiLobrow thanks go out to Matthew De Abaitua for guest-judging our first contest, and to Rick Pinchera for the brilliant illustration. Thanks, also, to the 225+ talented writers who entered their stories.