One in an ongoing series of nonfiction stories about lost objects. In 2017, Project:Object’s Josh Glenn and Rob Walker asked 25 writers to tell us about a significant object they’d lost (or thrown away, or destroyed), then assigned these stories to 25 illustrators. The first Lost Objects series was such a hit with readers, and so fun for us to publish, that we’ve decided it deserves a sequel.

The punctum, Barthes called it, from the Latin for “point”: that little detail in a photograph that “pricks me (but also bruises me, is poignant to me),” as he put it in Camera Lucida.

I’m looking at a photograph of my grandfather, George Killam, in uniform. Newly enlisted in Nova Scotia’s 219th (Highland) Battalion, he’s off to fight in the Great War. It was taken, most likely, in 1916, during basic training. A skinny 16-year-old (like so many, he lied about his age), Private Killam stands in front of a conical, white-canvas tent, cornet cradled in one arm. (He blew “Reveille” until the Army transferred him to the machine gun corps.) He’s jaunty in his balmoral cap, its upright feathers signaling pluck and esprit de corps, but his boots look too big for him.

Truth be told, it’s a print of a print. The original, a snapshot in a cheap tin frame, enjoyed pride of place on my dorm-room desk during my college years. At some point it disappeared, carried away on the eddies of everyday life. All that remains is this copy of a copy, not much better than a Xerox — flotsam from the wreck of time.

What pricks me is his mild, barely there smile, Mona Lisa’s idea of a stiff upper lip. In later life, he wore dentures. Self-conscious, he managed the neat trick of chuckling at his deadpan jokes without showing his teeth, a quirk that made his corner-of-the-mouth wisecracks seem even funnier. Because he and my grandmother raised me during my preschool years — my father left the day I was born; my mother was studying at Boston’s School of the Museum of Fine Arts — I acquired the habit, still intact, of the tight-lipped smile. Soon enough, an unconvincing stepdad would assume his role — but never take his place. Ever since, I’ve been drawn to imaginary fathers, all struck from his wry, stoic mold: Sherlock Holmes, Marcel Duchamp, Mr. Spock, Paul Bowles, J.G. Ballard.

Shortly after the photo was taken, he and the rest of his cohort boarded the S.S. Olympic, the Titanic’s sister ship, bound for England and, ultimately, the Western Front. “Never did Halifax seem lovelier than in the bright autumn air as the Battalion marched along Barrington Street and up Spring Garden Road… to the Common, where a vast company of friends and well-wishers had congregated to say good-bye,” M.S. Hunt recalls, in Nova Scotia’s Part in the Great War. “Ranks were broken and the soldiers mingled freely with the people. The ‘Fall In’ sounded, the band struck up a lively air, and the march past resumed until the gates of the docks closed behind the last file.”

His time in France is obscure. Like so many veterans of the Great War, he was close-mouthed on the subject. With a little prying, though, he did tell me a story that impressed me mightily: never poke your head above the trench, his commander admonished the troops. An incautious chap stood up to light a cigarette, cupping his hand around the flame, and was promptly cut down by a bullet between the eyes, courtesy a German sniper. Let that be a lesson to you, my grandfather told me, somewhat cryptically. The story had the shape of an Old Testament parable, but I thought I heard a hint of graveyard humor in there, too. 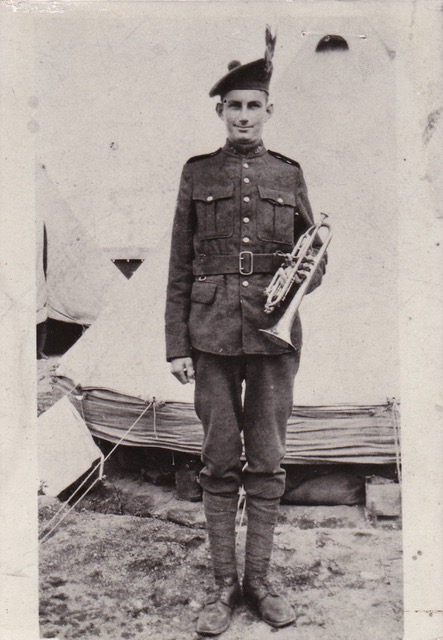 ABOUT THE ARTIST: Kelli Anderson is into: lo-fi, simple things that don’t behave as expected. Author of This Book is a Planetarium, This Book is a Camera.

See All Posts by Mark Dery

Mark Dery is a cultural critic and essayist whose latest book is the biography, Born to Be Posthumous: The Eccentric Life and Mysterious Genius of Edward Gorey.