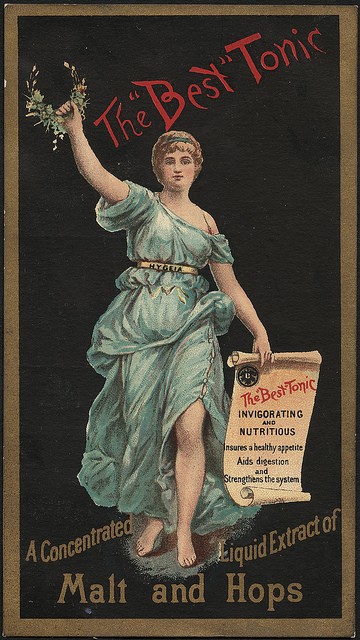 Pabst’s Extract Tonic, Anheuser-Busch’s Malt-Nutrine, and Blatz’s Malt-Vivine were just a few of the “non-intoxicating” malt tonics available to buck up the spirits of white, well-off American men and women, suffering from the nervous exhaustion brought on by the pace of modern life at the turn of the twentieth century.

In the words of Minnesota brewing historian Doug Hoverson, “Malt tonics were a profitable way for breweries to use excess capacity — even more so since tonics did not have be fermented or aged and so did not take up valuable storage space.” In the marketplace, they competed with patent medicines — like Dr. Buckland’s Scotch Essence of Oats and Dr. Pierce’s Golden Medical Discovery — as a cure for insomnia, appetite stimulant, and as a remedy to the disease known as neurasthenia. In business men, the latter produced “jangled nerves” after a day at the office. “How often do you come home at night too dogged tired to even respond to the pleasant reception awaiting you?” asked a malt tonic ad from 1909. “Life’s struggle becomes more and more intense as the twentieth century progresses.”

Women had a more complicated relationship with neurasthenia, which presented them with both physical and emotional symptoms. Here, too, malt tonic played a pivotal role. Individuals who underwent Dr. S. Weir Mitchell’s infamous rest cure in the late nineteenth century were prescribed a combination of bed rest, massage, treatment with electric current, and a diet that called for a surprising amount of alcohol. Described in his book Fat and Blood: An Essay on the Treatment of Certain Forms of Neurasthenia and Hysteria (1877; it went into many editions thereafter), the regime for “feeble, thin-blooded, neurasthenic or hysterical women” included, after the first ten or so days, two to four ounces of fluid malt extract before each meal. (For those who had “never taken it in excess, or as a habit,” he also might prescribe an additional “ounce a day of whiskey in milk, or a glass of dry champagne or red wine.”) He conceded that even the small amount of alcohol (“some four per cent”) present in the malt extract was “found to excite certain persons.” (Charlotte Perkins Gilman’s classic short story, “The Yellow Wallpaper,” was written, she later said, “to convince [Dr. Mitchell] of the error of his ways” and thus save others from the cure that she said nearly drove her mad.) 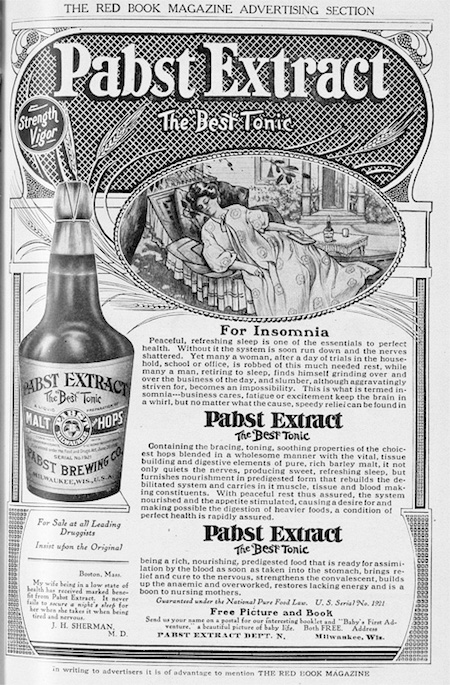 By the early twentieth century, an increasing number of women were doing office work alongside men. These business women also suffered from neurasthenia. Writing in 1911, Dr. H.G. Webster described “the monotony of office routine, the necessity of performing the daily quota of work, the annoyance of transportation difficulties,” all of it “in some instances intensified by menstrual discomfort.” Also “promoting nervous irritability” was the “natural modesty, that deters sensitive women from paying strict attention to regular evacuation of the bowels, during business hours” as well as their “unsatisfied, if unconscious, sexual cravings.”

“The influence of woman in business life upon mental and nervous morbidity is much greater than might be apparent upon first thought,” wrote Dr. Francis Ely that same year, himself sounding a bit hysterical on the topic. More women working meant fewer women marrying “and as a result we have a higher degree of immorality,” which led to increased rates of VD and syphilis.

In the second place, it cannot be denied, squirm and scoff as many of the business women will, that maternity is the primary instinct of womanhood; and when this instinct is suppressed… various hysterical and neurasthenic symptoms are apt to creep out. Why is the proverbial “old maid” considered a subject of jest? Because she is different. Why is she different? Because she spends a lifetime trying to suppress a heartfelt desire. If she be fortunate enough to find a mental safety-valve in the form of some congenial work which leads her out of herself [this was a reference to teaching, nursing, or other traditionally “women’s work”] … she may avoid becoming mentally and nervously abnormal; but a large number of spinsters become self-centered, introspective, neurasthenic, and in many instances, hysterical. 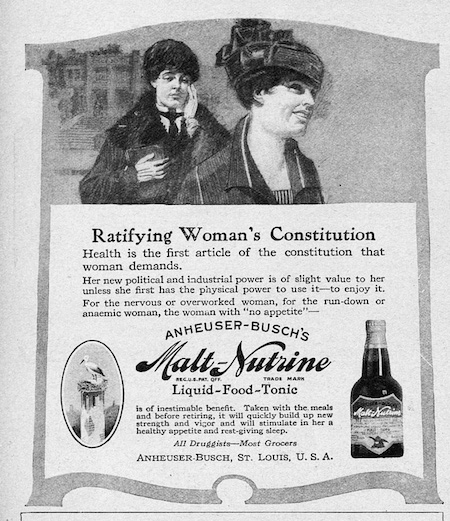 Luckily, malt tonic was there to assist horny, constipated women workers skating on the edge of hysteria, though advertisers wisely chose less lurid approaches. “Stenographers, teachers, nurses” were urged to “try a glassful at bedtime, and enjoy girlhood’s untroubled sleep again.” An ad from 1904 proclaimed the young century to be “Woman’s Era” and made a very early reference to the ongoing problem of work/life balance: “Woman’s advancement has added new responsibilities to the burdens Nature has already imposed upon here [i.e., those pesky menses]. With frail body and shattered nerves, how can she carry this double burden?” Luckily, Pabst Extract Tonic was there to sooth the business woman’s “fretted nerves like a mother’s kiss.” Zang’s Malt Tonic made no explicit claims about its effects on the overworked, but simply placed ads in The Business Woman’s Magazine in 1903. Anheuser-Busch linked its product with woman suffrage in an ad that was as surely tone deaf in 1919 as similar campaigns are today: “Health is the first article of the constitution that woman demands. Her new political and industrial power is of slight value to her unless she first has the physical power to use it — to enjoy it.” 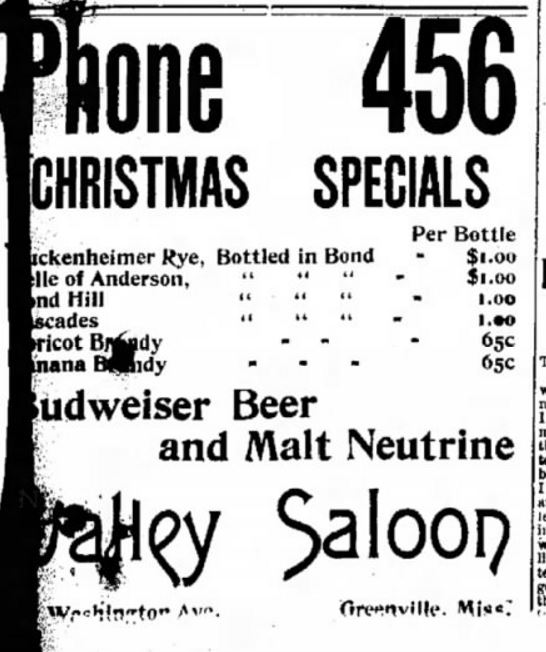 The line between medicinal miracle worker and a quick nip of booze was an exceedingly fine one. A Mississippi saloon advertised Malt-Nutrine alongside beer and whisky for holiday consumption in 1905. Anheuser-Busch’s own advertising for Malt-Nutrine described it as the only “pure” and “strengthening” tonic, and damned its competitors by labeling them “simply a strong dark beer.” At around 4.6%, Pabst Extract Tonic’s alcohol content was in fact the same as many beers, but according to an ad from 1902, hyphenated for emphasis: “It-is-not-beer.” Instead, the tonic’s percentage of alcohol was “just the right quantity to carry with it the highest nutritive and strengthening effects. Pabst Malt Extract is a food.” Thus, it was ideal for pregnant women, lactating mothers, and children — so said the ads. 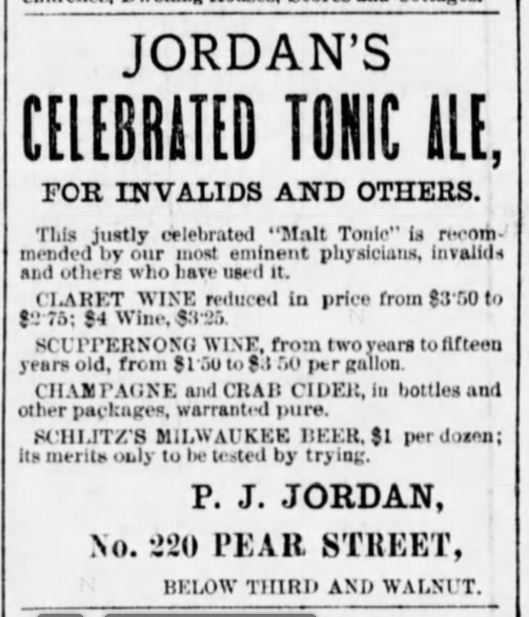 Without doubt, some women drank malt tonics for the alcoholic kick. The Los Angeles Times described the scene at Venice Beach in 1913: “Every day at the soda fountains along Windward avenue the festive cry ‘gimme a shot of hops’ and ‘trot out the near beer’ is heard.” The paper noted that women, prohibited from entering saloons, were “especially fond of the malt tonics and malt and hop drinks which taste like beer.”

Prohibition curtailed the sale of malt tonics in November 1921, though Pabst and Anheuser Busch were eventually given dispensations to sell those with a lowered alcohol content of 3.75%. Pabst’s president cheered the government’s recognition of what he called a “legitimate demand for a malt product for nursing mothers, convalescents and invalids.” A male reporter who tried Pabst’s tonic in 1926 deemed it “bitter” and “obnoxious,” then called for a chaser of 2.75% beer.