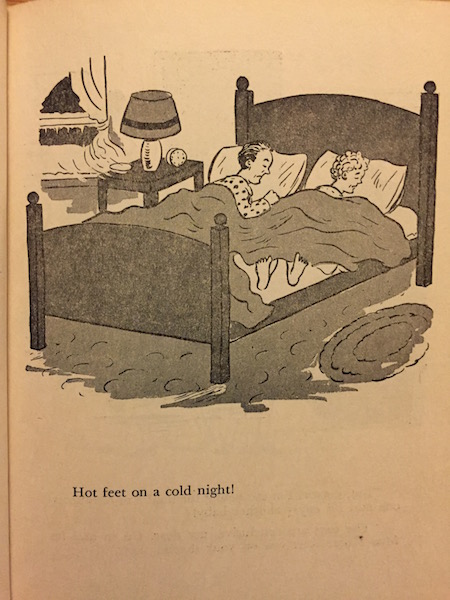 A few years ago, I was sitting in the back seat of my husband’s 1963 Pontiac as we took some visiting friends for a drive around the sights of Oakland. We were up in the hills by the Mormon Temple when all of a sudden my husband turned on the heater, even though it was a lovely, warm spring day. Maybe, I thought, the car was overheating and he needed to draw the extra heat off the engine. Tiny beads of sweat accumulated under my hairline; I remembered what it was like back in Wisconsin, when you walked through an overheated store in your winter coat. The warmth welled up from my core and spread to my face, as if I’d been embarrassed in front of the whole class, except I was 53 years old and the schoolroom was far behind me. Mechanical problems or not, it was too much. I was just about to tell him to turn down the heat when it hit me: I was having a hot flash. Fuck.

From both pop cultural and marketing viewpoints, menopause is less sexy than menarche. There are anthologies filled with essays about getting one’s first period, but there’s no Are You There God, It’s Me, Margaret for the perimenopausal set. Neither is there an equivalent to Very Personally Yours, Growing Up and Liking It, or other classics of menstrual education literature (in part, of course, because such pamphlets mainly existed to sell pads and tampons). Perhaps a decade prior to that moment in my husband’s car, a doctor asked me if I had been having hot flashes. When I said I didn’t think so, she all but snorted and said, in a deeply insinuating tone of voice, “Oh, you’ll know.” Such was my menopausal education. Here, then, is a brief selection of expert advice culled from my collection of vintage advice books. 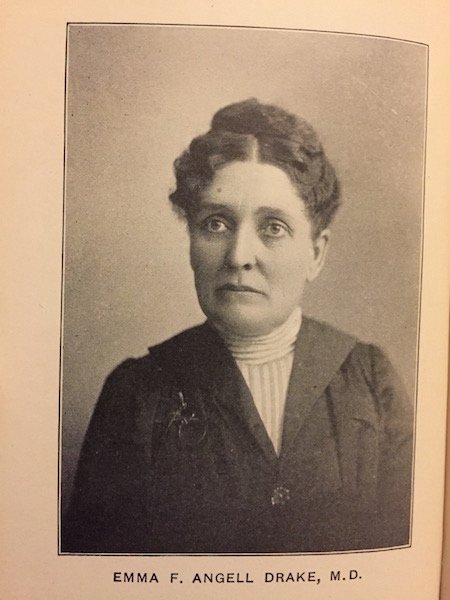 The final installment of the Self and Sex Series for women (previous volumes covered the young girl, young woman, and young wife; there were corresponding titles for boys and men), Woman of Forty-Five took a pious approach to bodily functions. For women who found menopausal symptoms “moderately troublesome” (these included women who experienced “a stormy menstrual life” or had “been addicted to venereal excesses,” including “many shop-women” and “women of fashion”), a “firm reliance upon God” would “tide one safely over a rough sea.” Though Dr. Drake acknowledged the hot flashes, mental fuzziness, and irritability that come with “the climacteric,” she was also fond of extended, inscrutable metaphors: “This time of life in a woman may be likened to an early fall house cleaning…. The cleaning is all that the homekeeper can well undertake with the other duties that fall to her; but let a troublesome guest or two come unbidden and tie her hands and then none of the work will be done as it should be, and the woman worn out with the nervous strain, and her courage all gone, will succumb to the slightest demand upon her strength, even though in the line of daily duty.” This makes me wonder if “Mrs. Dr. Drake” (a popular nineteenth-century circumlocution) once attempted to strangle Mr. Drake with a dish towel when he interrupted her one time too many as she cleaned the kitchen after a long day at the office. 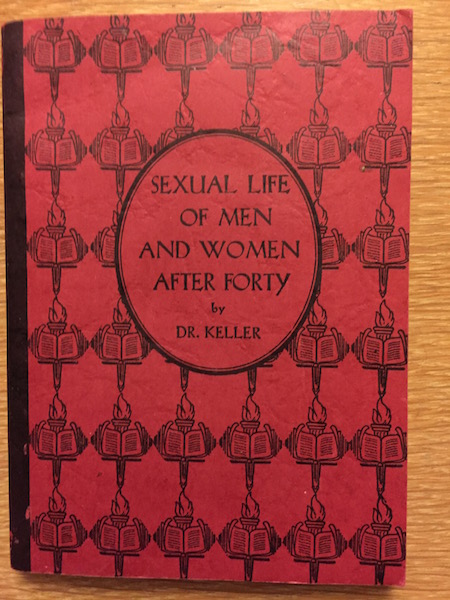 This little booklet was one of a series that was likely available via advertisements in the back of magazines, given its copyright was assigned to muscleman Charles Atlas’s organization (not to mention that Keller was a prolific author of science fiction published in the pulps). In Keller’s estimation, life was “a constant fight” for the middle-aged woman “to reduce her weight and retain her beauty.” A woman emerged from menopause either as “a hopeless wreck” or as one “capable of enjoying the best things of life for many years to come” depending, in part on “the intelligence and care that her husband has shown in his treatment of her… up to that time of life.” This was less about his empathetic understanding of gender politics than any visits to the brothel he may have made. “No matter how careful” a woman was of her health, she could not “guard herself from the infection by her husband, of venereal diseases, and no woman can ever reach the age of fifty in good health who has had gonorrhea or syphilis.”

Hot flashes, per Dr. Keller, were all in the sufferer’s mind. “There is no actual change of temperature, as far as the thermometer can ascertain, and no way of finding out whether these changes really exist or are simply due to the nervous imagination of the woman,” he wrote. Even worse, loose-tongued harpies poisoned the minds of the young:

Every young woman after her marriage has an opportunity of associating with older women and has had a frequent chance to hear their complaints about the misery which they encounter during the menopause, and the story of the hot and cold flashes has been one of the most constant of these tales, handed down by word of mouth for many generations. The young woman is, therefore, thoroughly prepared to have the same feelings when she reaches middle life, and if she sits too near the stove or by an open window and feels either hot or cold, she is at once sure that it is the same fate that has visited her older sisters in misfortune.

Not surprisingly, Keller took the side of straying husbands when it came to wives who let themselves go (so to speak): “Of all the property he has, she is the one part that has cost him the most in every way, and when he finds that she is fading, through her own neglect and indifference, it is no wonder that he feels aggrieved and responds by an increasing carelessness of his marital rights and a tendency to spend his time with other and younger women.” 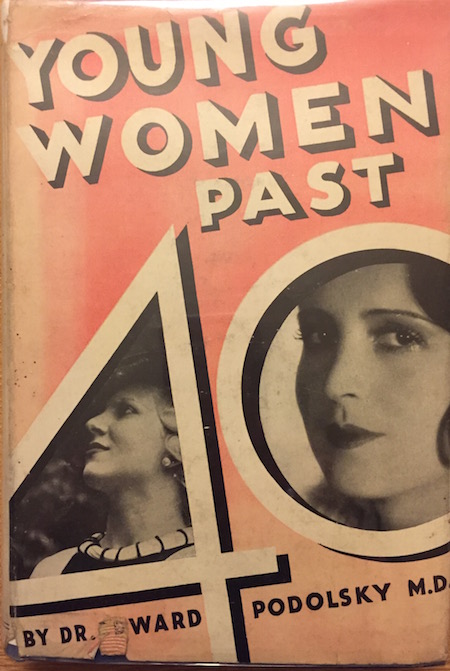 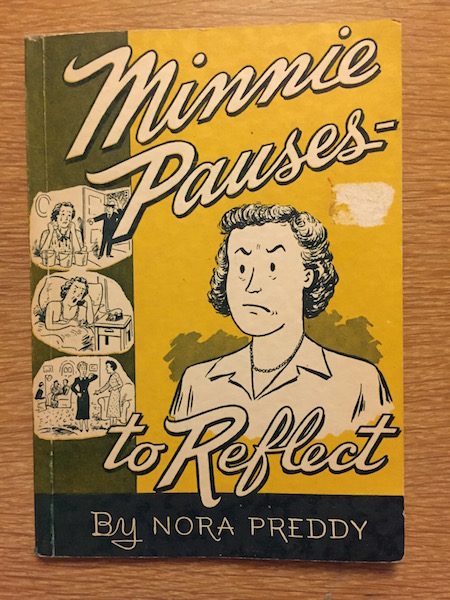 Ugh, yes, I know. “Minnie pauses” is a bad, bad play on words. The cartoons aren’t much better. One, captioned “Hot feet on a cold night!”, showed a husband and wife in bed with a pair of feet — meant to be the wife’s — floating near the bottom of her legs, but seemingly unconnected to her body. Preddy nevertheless meant well. “Keep a vital interest in life and a sense of humor. Laugh at the menopause,” she summed up in a brief preface. Her cartoons showed middle-aged, middle-class white women suffering from hot flashes, “palpitations,” and hypochondria, along with several references to hysterectomy. “HAVEN’T YOU HAD YOUR HYSTERECTOMY YET?” asks one of a quartet of women presumably playing bridge. “EVERYONE DOES NOW,” says another. Minnie Pauses may have inspired more terror than chuckles. 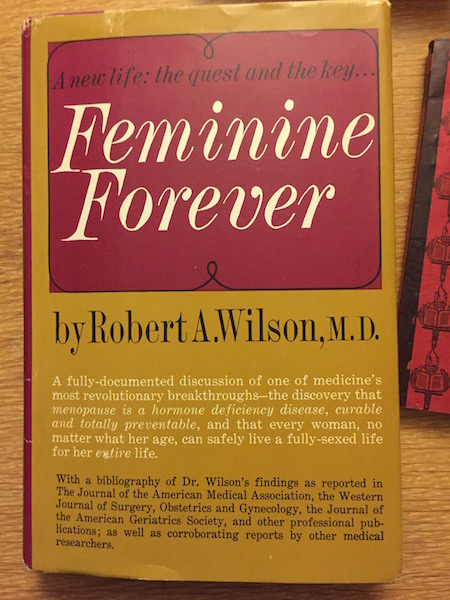 Won’t someone please think of the husbands? Written by a doctor with connections to big pharma hormone manufacturers, Feminine Forever preached the gospel of estrogen replacement. Where previous books suggested that “the change” was irksome and uncomfortable, Wilson proclaimed “the transformation… of a formerly pleasant, energetic woman into a dull-minded but sharp-tongued caricature of her former self … one of the saddest of human spectacles.” Menopause was now a “serious, painful, and often crippling disease” that could be “cured” with a shot of estrogen. And what thoughtful woman wouldn’t want to do so, when “her husband, her family,” not to mention “her business associates, her neighborhood storekeepers, and all others with whom she comes into contact,” were affected when she was “suddenly desexed” by menopause? Wilson began his chapter on menopause with an anecdote about a tubercular man who came into his office demanding something “to fix” his “old and crabby” wife, ending his litany of woes (“She won’t fix meals” among them) by pulling out a gun, laying it on the doctor’s desk and announcing: “If you don’t cure her, I’ll kill her.” Dr. Wilson put his wife on “intensive twice-a-week estrogen injections” and before too long “she was very busy taking care” of her sick husband. “Thanks to the healing power of the estrogen I administered,” mused Wilson, the woman avoided “a violent death at the hands of her own husband.”