*
LIBERATION CAN BE TOUGH ON A WOMAN

Protesting the “consumer con game” was part of the second-wave feminists’ agenda from start, but advertisers in the late 1960s and early ’70s coopted the movement’s language and imagery to sell everything from wigs to white-out. As used by copywriters of the day, the word “liberation” meant freedom from restrictive underwear and sanitary belts but also sent a wink to newly emancipated female consumers. The point, per feminist and media critic Andi Zeisler, “was to capture potential customers who believed enough in women’s liberation to want to support companies that referenced it, but not enough to shun what feminists saw as tools of sexual objectification.”

Consider the relationship between women’s liberationists and bras. An Associated Press story with the eye-catching title “Female Protest — A Bra Burning” ran in newspapers on September 4, 1968. A demonstration was planned to take place outside the Miss America pageant later that week in Atlantic City, New Jersey. “We are discussing the possibility of throwing away all vestiges of female enslavement — bras, girdles, copies of Harper’s Bazaar … we might even have a bra burning,” explained a participant. 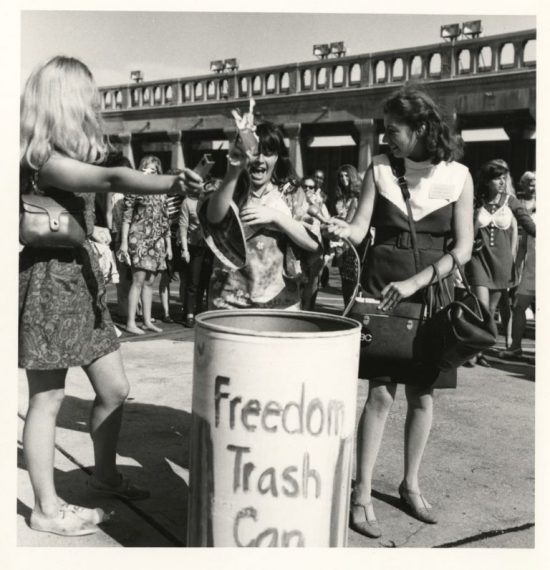 Photos of the event show fully clothed women throwing items into the Freedom Trash Can as planned, but no bras were actually burned (for one thing, the resulting smoke would have violated the city’s anti-pollution ordinance). Even so, readers of Art Buchwald’s syndicated column of September 12 learned that the “final and most tragic part of the protest took place when several of the women publicly burned their brassieres.” 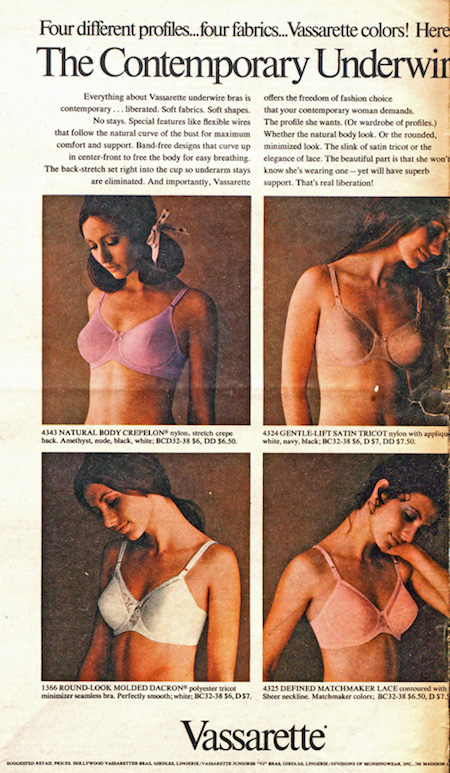 Yet only a few years later, a “Liberation Bra” was being marketed to consumers in the back pages of a woman’s magazine. Consisting of a pair of stick-on pads, it was touted as the “happy medium” for those torn between “Bra” and “No Bra” looks. That same year (1970), Vassarette promised that the woman who wore their more traditional underwire bra wouldn’t “know she’s wearing one — yet will have superb support. That’s real liberation!” Of course, real “libbers,” who opted out of the beauty game altogether, were bad for business. But their rhetoric was nonetheless useful to sell garments to consumers who wanted to get in on the braless “natural” look, but were too shy to flout accepted standards of femininity by going fully nude beneath their blouses. 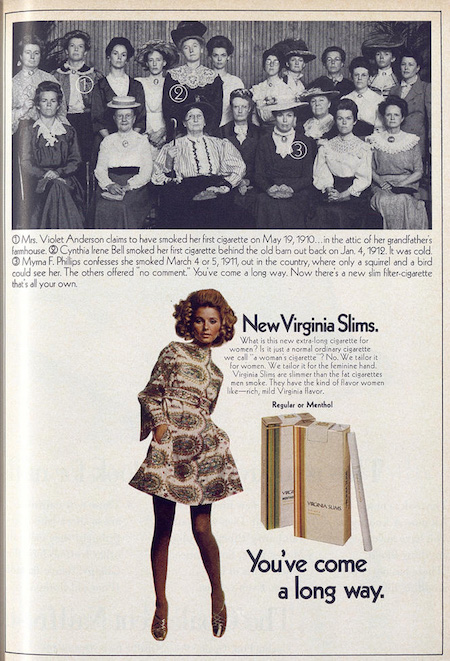 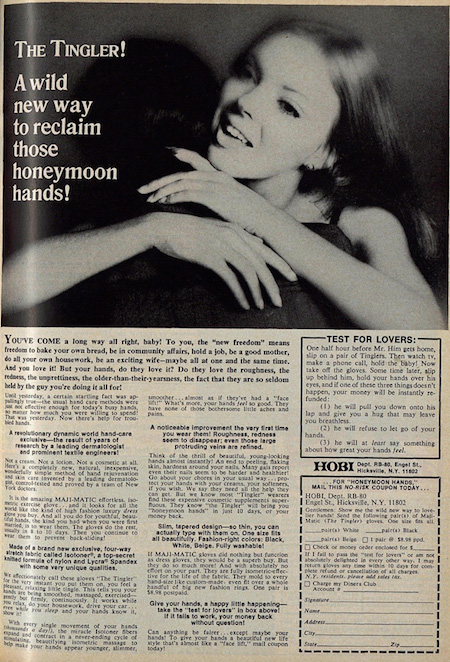 Advertising for Virginia Slims cigarettes famously posited smoking as a gesture of female empowerment in a series of ads beginning in 1968. All hinged on some version of a sepia-toned past where women’s various rights were restricted, contrasted by the full-color present where sexy women were allowed to smoke in public. The ads were so successful that in 1970 a glove manufacturer stole Virginia Slims’ tagline outright, even though what came after it was the same old mystique: “You’ve come a long way all right, baby! To you, the ‘new freedom’ means freedom to bake your own bread, be in community affairs, hold a job, be a good mother, do all your own housework, be an exciting wife — maybe all at one and the same time. And you love it!” There followed a line possibly as old as advertising itself: “But your hands, do they love it?” (Double points here for prophetic use of “New Freedom,” also the name of the first adhesive sanitary napkin, introduced by Kotex in 1972.)

As the 1970s progressed and the women’s movement showed no sign of abating, all kinds of consumer products jumped on the liberation bandwagon. “I am free. Liberated. I want to look like many things. A Lioness. A Gypsy. A regal Princess” read an ad for wigs in Harper’s Bazaar (one called “Liberation” was described as a “mad gypsy that brings out your mystery”). A “double scrub” washer-dryer promised to unleash “a new liberation movement” in the basement. Caffeine pills offering “a gentle pick-me-up” reminded readers that “Liberation can be tough on a woman.” An ad for a correction pen was headlined with the single word “Liberation” and featured a model wearing a faux political armband. (Liquid Paper had the distinction of being invented by a woman, Betty Nesmith Graham, who ran the company in 1970, when the ad appeared.) 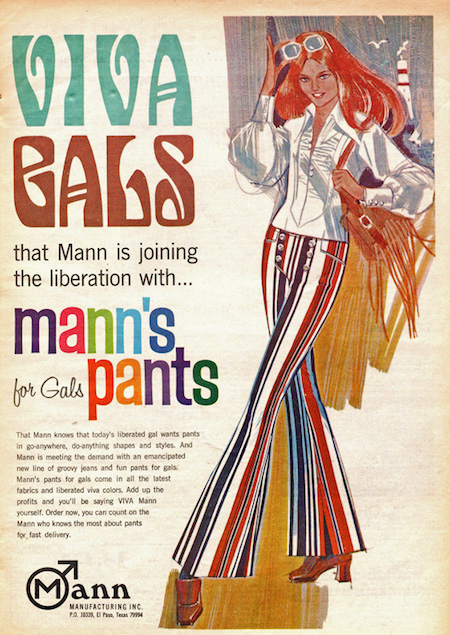 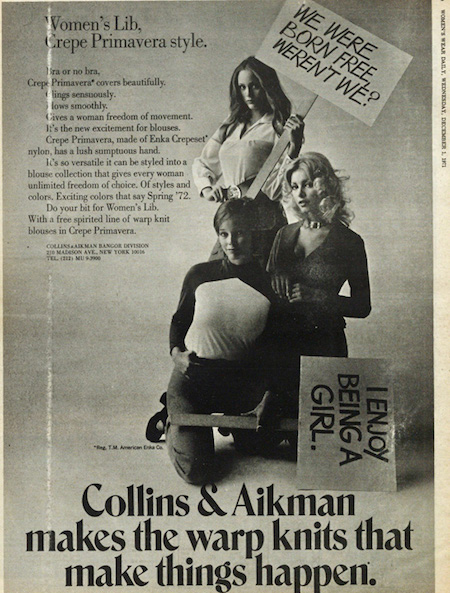 The pages of the venerable fashion industry publication Women’s Wear Daily carried some of the most condescending liberation advertising — perhaps because much of its readership was compromised of non-liberated men who sold their goods to women. “Today’s liberated gal” demanded “an emancipated line of groovy jeans and fun pants” according to a 1970 ad. An ad for synthetic fabric from the following year showed “Women’s Lib, Crepe Primavera style.” Models held protest signs reading “We were born free weren’t we?” and “I enjoy being a girl.” The text ended with the exhortation to “Do your bit for Women’s Lib” by producing a line of blouses in the advertised fabric. Feminism, these ads suggested, was merely another fad of which the savvy manufacturer should take advantage before the silly girls were on to the next big thing.

Liberation-themed advertising appeared less frequently beginning in the mid-1970s, possibly as advertisers realized that not all women identified as feminists (even if they were by and large happy to take advantage of feminism’s gains). A 1974 ad for The Literary Guild book club spoke directly to this consumer. A photo of an elegantly dressed woman appeared next to the copy:

Yes, I listened when Women’s Lib told me to get out there and burn my bra, pay my own check, picket the local men’s tavern. I think Women’s Lib has some pretty good ideas (none of the above).

And sure I have a job.

But I love taking care of the house, bringing up the kids, cooking my husband’s dinner. I find I can expand my own consciousness — as well as my family’s — by reading.

Asked in 1972 what she thought of “ads for Virginia Slims cigarettes” and Helen Gurley Brown’s pro-career-girl but not exactly feminist Cosmopolitan magazine, Gloria Steinem noted “their good intentions” as well as their portrayal of “women as phony vamps” and sex objects. “Everybody is always saying politics is ‘out there’ some place. Well, politics begins right here with Virginia Slims ads and with magazines that sell us a bill of goods,” she said.