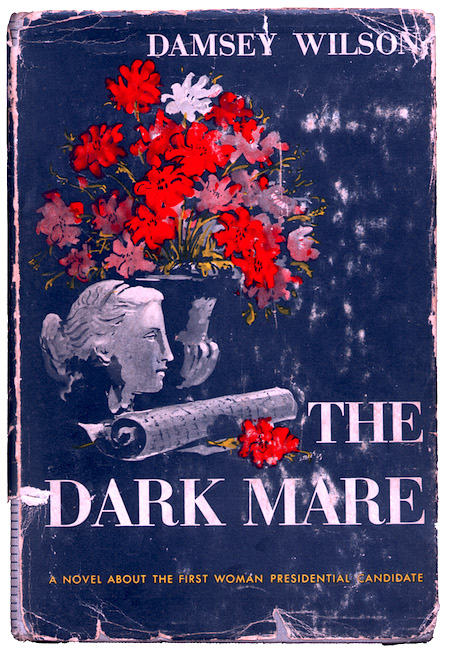 Roughly six weeks after the day in September 1948 that Margaret Chase Smith became the first woman to be elected to the Senate in her own right, as well as the first woman to serve in both Houses of Congress, Walter Winchell teased his readers with the following item: “Doubleday Doran will publish The Dark Mare in the Spring.” A woman, Damsey Wilson, was identified as the author. The book finally appeared in 1952, “A NOVEL ABOUT THE FIRST WOMAN PRESIDENTIAL CANDIDATE” sitting just below the title.

Unfortunately, The Dark Mare is not a political thriller. It’s not even a political potboiler. The action takes place on election day 1950-something. Dark horse presidential candidate Miriam Hall Bradley (a woman, hence the “dark mare” of the title) recollects her adult life in a series of flashbacks while waiting for returns. She is a former journalist, current university president, and author (A New American Ideology and The State of the People are but two of her titles), a progressive liberal who believes in racial equality, a single standard of sexual behavior for men and women, and world peace. Her husband, H. Custer “Brad” Bradley, Jr., is a newspaper editor who accuses her of being “goofy on feminism,” but who actually likes her brain and the fact that she engages in intellectual arguments with him. Together, they have three children, two in college and one in grade school.

Miriam has been nominated as her party’s (not mentioned, but surely Democratic) populist nominee after a rousing speech at the convention, wherein she denounces all the “flaws in a political system which could inflict party-machine candidates upon a trusting constituency.” She realizes that her election will “mean the beginning of a long, arduous one-woman struggle against outworn traditions and prejudices lasting four years.”

Wilson barely scratches the surface of Miriam’s political career or her feminism, instead favoring plotlines better suited for soap opera. Will rich bitch Louise Wyeth finally steal the soon-to-be First Gentleman away from hardworking-but-possibly-negligent-in-her-womanly-duties Miriam, on the very eve of her election? Will Miriam’s children stage a revolt when their mother becomes president? And what about kindly Mrs. Weldon and her misogynist jackass of a husband, Amos?

Not that the media, or even the culture as a whole, did much better at separating real-life woman politicians from traditional gender roles. A headline following Margaret Chase Smith’s historic election noted that the new senator “Is as Good at Politics as She Is at Cooking.” Smith herself compared politics to domestic management: “Women administer the home. They set the rules, enforce them, mete out justice for violations. Thus, like Congress, they legislate; like the Executive, they administer; like the courts, they interpret the rules.” Homemaking was therefore “an ideal experience for politics.” (Smith’s name was put into nomination for the presidency at the 1964 Republican convention. A moderate Republican — such things existed then — she eventually lost to Barry Goldwater.)

The Dark Mare was Damsey Wilson’s second novel. Published twenty years earlier, A Woman Like Me is nearly impossible to find now, which is a shame, because it sounds like a lulu. According to a snarky 1932 review, A Woman Like Me was the story of Nancy Prager, “who was not only beautiful but chaste…. Even when she had been offered a squirrel coat in return for certain favors by the masculine Miss Peggy, who ran the Fifth Avenue shop where she modeled, she was able to refuse — and still get the coat.” Another reviewer called the book “far from a finished piece of writing,” before relenting: “When one considers, however, that it is a first novel, written by a very young author, we cannot help but feel it shows promise.”

The promise remained unfulfilled. Reviews for The Dark Mare veered from negative to brutal. “Only election year, I hope, would be responsible for such a shallow novel,” wrote the reviewer at The Akron Beacon Journal, before noting that the author had “too little ability” for the book to “be meaningful, significant, satirical or even amusing.” The Louisville Courier-Journal declared that “Miriam isn’t man enough for the job” of President and got in a dig at her “federalized plan for world peace.” A newspaper from Louisiana called The Dark Mare “hilarious” (it’s not even unintentionally funny). The New Yorker concluded: “This is a very dull book.”

Fair enough, but one of the things that makes The Dark Mare interesting today is that prior to the second wave of feminism there were so few novels that dared to imagine a female presidency, or even a candidacy, at all. Characters based on Victoria Woodhull (a free-love advocate and former stockbroker, Woodhull became the first woman to run for president in 1872) showed up in two books, Harriet Beecher Stowe’s My Wife and I (1871; as Audacia Dangereyes) and Henry James’s The Bostonians (1886; as Verena Tarrant). Both characters are feminists, but neither run for president, though there is speculation that Audacia might.

Science fiction picked up the slack, perhaps because the genre had more room to visualize the as yet unseen future. In C.L. Moore’s 1939 short story “Greater Than Gods,” the first woman president wins election on a platform similar to that of Miriam Hall Bradley, promising “no war as long as a woman dwelt in the White House.” Former Secretary of Health, Education and Welfare Josephine Van Brukker-Brown is Acting Chief Executive in Pat Frank’s Alas, Babylon (1959) due to the simple fact that everyone above her in the government is dead due to a nuclear Armageddon (in other words, a woman president is just one more sign of the apocalypse). But again, these are minor characters. 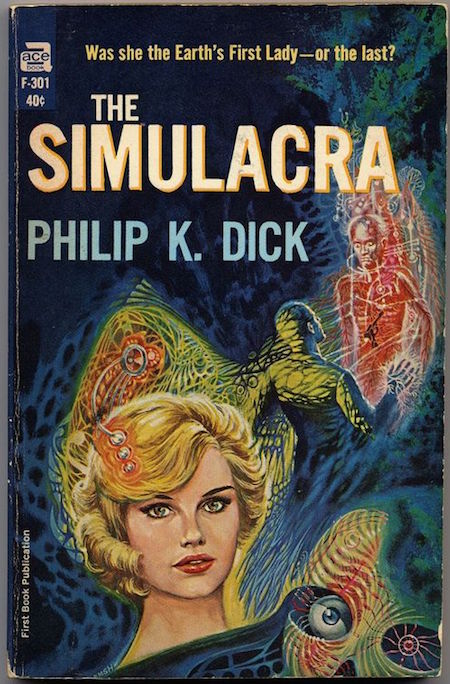 A female executive plays a larger role in Philip K. Dick’s The Simulacra (1964). The twist, however, is that by the 1990s, the First Lady has gradually usurped the power of the presidency. People vote every four years for “der Alte,” the man they think she will like best. (A film from the same year, Kisses for My President, starred Polly Bergen as the first woman president and Fred MacMurray as her hapless husband. The movie is essentially a role reversal comedy that ends when Bergen resigns the presidency due to pregnancy.)

Ultimately, The Dark Mare is a fascinating disappointment. Perhaps its most interesting moment — to a feminist reader in 2016 — comes on page 175. In one of the novel’s flashbacks, Miriam’s children are small, she isn’t working outside the home, and she has begun to “feel a nagging restlessness.” Louise Wyeth comes for a visit, back home from Germany after a failed marriage, praising Hitler as well as the new, domestic Miriam: “Even with all your brilliance and talent, now that you’re happily married I’ll bet you never even think of writing about the poor and all that crazy stuff anymore. Isn’t that true?” Miriam hesitatingly agrees “more or less.” Then, after Louise has gone home, Miriam realizes (italics in the original): “I am not at all content.” Damsey Wilson thus described “the problem that has no name” over a decade before Betty Friedan did so in The Feminine Mystique.

She never wrote another book.