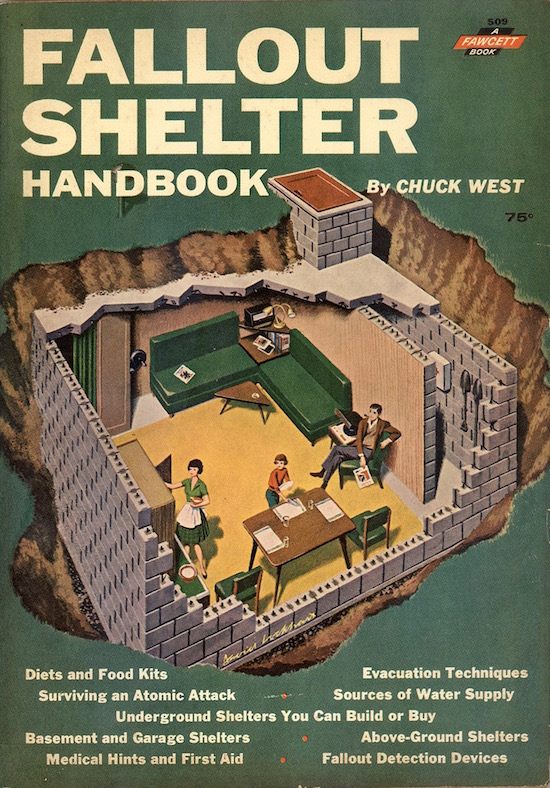 At five in the afternoon on Sunday, July 12, 1959, Melvin Mininson and Maria Rodriguez exchanged wedding vows in Miami, Florida. Then they climbed down a ten-foot ladder into the eight-foot wide, fourteen-foot long concrete fallout shelter that would serve as their honeymoon home for the next two weeks. The Mininsons were the first of three couples who spent part of that summer experimenting with bomb shelter living. If nothing else, their combined experiences suggest that spending two weeks in a dark, cramped space, eating canned foods, and using a chemical toilet may have been only marginally preferable to the threat of immediate nuclear incineration. 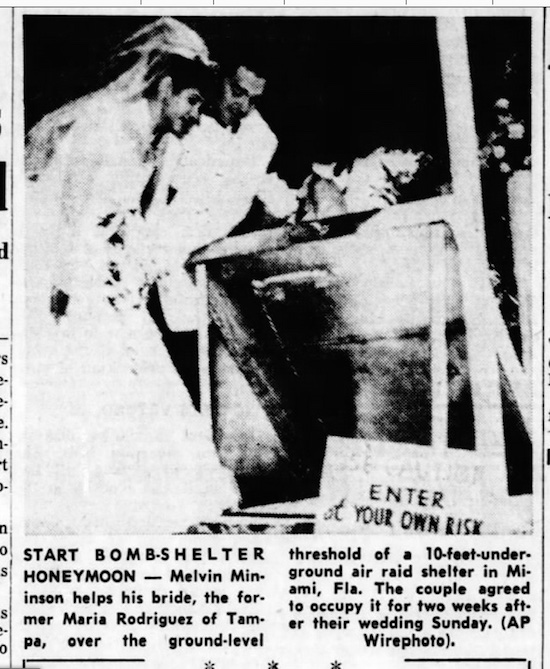 A decade into the Cold War, by 1959 Americans had a fierce case of atomic jitters. Newspaper articles explained the difference between “Alert” and “Take Cover” signals (the former was “a steady blast of 3 to 5 minutes” that warned of a “probable” attack; the latter, a “wailing tone or short blasts for 3 minutes,” meant an attack was “imminent”). An article with the soothing title “YOUR CHANCES FOR SURVIVAL” asked readers to locate their position on a map showing “Fallout Condition At Six Hours After Detonation,” then imparted the bad news: “If you live in any one of 75 likely target areas, your chances of survival are slim.” The federal Office of Civilian Defense and Mobilization (OCDM) as well as similar agencies at state and local levels offered plans for improvised or purpose-built basement fallout shelters and provided checklists of equipment and provisions for use therein as a way to increase those odds. The theory was that if a nuclear attack occurred, a family could pop down to its shelter, wait out the two-week period when the radioactive fallout was at its hottest, then come back aboveground and commence living in the brave new world. 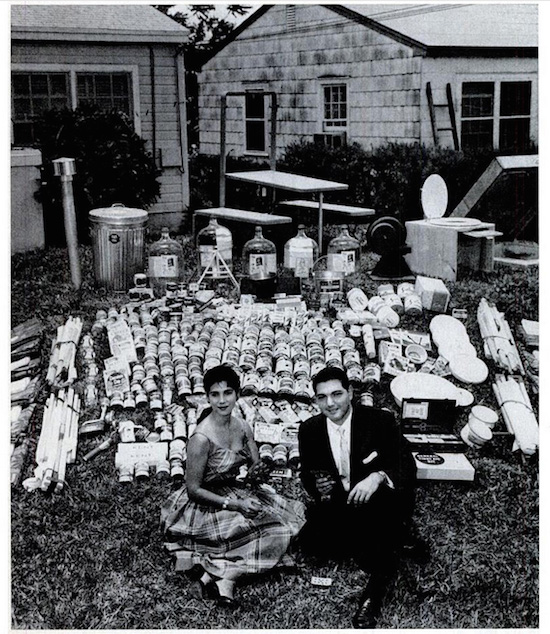 The Mininsons reappeared topside on July 26. The experience had been “no fun,” Melvin told reporters. “Wild horses couldn’t drive me back into another bomb shelter — not unless there was an enemy attack.” The first week flew by, but they spent the second counting the days, hours and minutes until it was over. The battery-operated telephone and radio ran out of batteries more than once. The couple took alcohol baths, and rationed their supply of drinking water. “Most of their food consisted of cold spaghetti, beef stew and tuna fish, from cans which they had to open first with the broken can opener and finally with scissors.” “My wife is a real good trouper,” concluded Melvin.

Perhaps this was not the type of publicity OCDM had in mind. The Mininsons’ experiment had been sponsored by Bomb Shelters, Inc., a local contractor, who promised the couple a trip to Mexico in exchange for their participation. Mere days after the newlyweds climbed back into the sunlight, a New Jersey family of five began their own underground adventure, this time backed with the imprimatur of science. “Operation Hideaway” (also referred to as “Project Hideaway”) was a joint undertaking between the OCDM and Dr. Jack A. Vernon of Princeton’s psychology department. Thomas and Madge Powner, along with their three children (the oldest was five-and-a-half, the youngest not quite two) entered an eight foot by nine foot bunker located in the basement of Princeton’s psych building on July 31. The shelter contained a double bed for the kids, while their parents made do with a mattress on the floor. There was a chemical toilet (which, it was later noted, didn’t “decompose, destroy or in any way get rid of waste materials”), a hand-cranked ventilator, 38 large jars of water, and canned and packaged food. The only light came from candles and flashlights. Food was heated using a chafing dish set over a candle, a process that took up to 90 minutes. There was also a “panic button” that could be used to stop the experiment at any time. 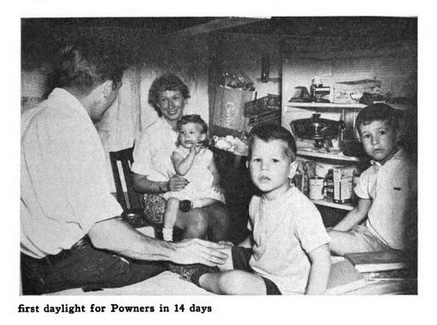 The family was paid $30 a day (about $250 in 2017 dollars) along with room and board (such as it was). Thomas Powner viewed the experiment as “two weeks’ rest.” Once reassured that there would be no ill effects on the children, Madge Powner saw it as a “test of myself. I thought that if a mother couldn’t live for two weeks in a room with her own husband and children, she wasn’t much of a person.” As recounted in a May 1960 Redbook magazine article, Dr. Vernon urged the couple “not to be heroic,” and reminded them the point was “not to determine how much courage it took to stay in the shelter for two weeks but rather what the effects were on a normal American family.”

What Dr. Vernon didn’t mention to the Powners until the experiment ended was that he and his colleagues were listening to their every word via a hidden microphone. Thirty-eight reels of tape resulted, including who knows how many inches devoted to a blow-up on Day 13, when Madge and Tom argued about whether to take a post-shelter vacation in Europe or Alaska. (According to Vernon, when told about the eavesdropping, the couple was angry, but not as mad as the doctors thought they’d be.) 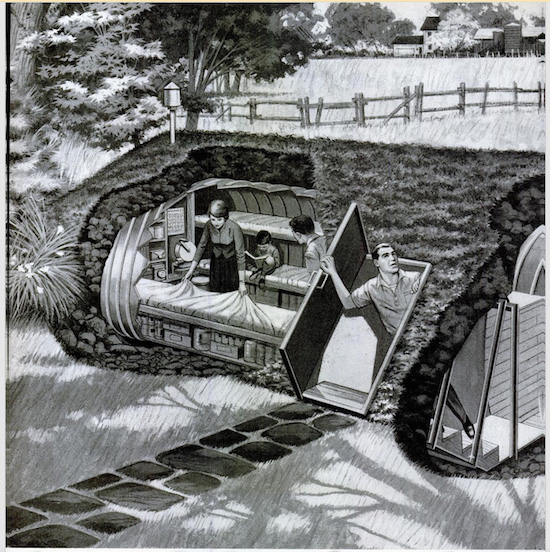 Vernon said the experiment successfully demonstrated that people could “be isolated in shelters for two weeks with no hazard to their health and well-being,” but that doesn’t seem to have been entirely true. The adults suffered from headaches and eyestrain, while one of the toddlers gained weight and showed “some signs of depression.” Madge confessed that she was emotionally “shattered” when, deep into the second week, she realized she’d mismarked the calendar and they actually had an extra day to go. (She nevertheless became a great proponent of home fallout shelters, speaking to women’s clubs and doing television and radio shows in addition to making a movie for Civil Defense of New York.) 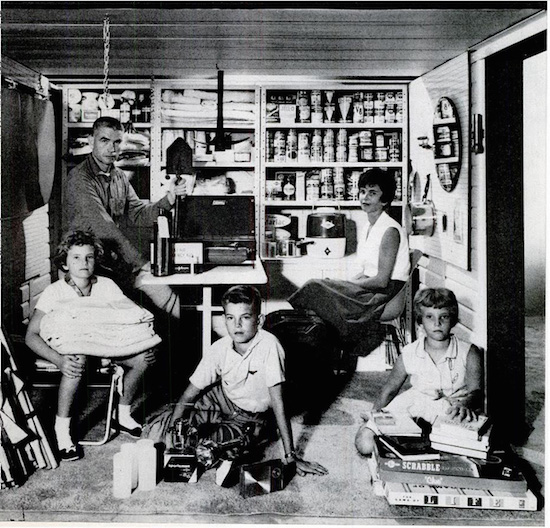 Describing Operation Hideaway in the Princeton Alumni Quarterly, Dr. Vernon noted that at “the same time as the Princeton study and unknown to us,” another family, the Parrys of Toronto, only made it seven days in a family fallout shelter before hitting the emergency “panic button.” In Dr. Vernon’s eyes, the Parrys “were psychologically ill prepared” quitters who left their children at home, and whose failure may have caused a lasting “negative public attitude” towards shelter life, had not the Powners’ success overshadowed it. (The Mininsons were apparently beneath his notice.)

What Dr. Vernon didn’t mention then (and what Mrs. Powner likely elided in her speeches on the subject) was that the Powners had extra help. According to a wire reports from the day the family emerged from the shelter: “They said they did it with the aid of tranquilizer pills for the children, a bottle of whisky for themselves, and a well-stocked library that included an unexpurgated Lady Chatterley’s Lover.”

Despite Dr. Vernon’s account, contemporary news reports make it clear that journalist Ross Parry and his wife Kay only ever intended to spend a week in their eight by ten shelter. No “panic button” was mentioned. 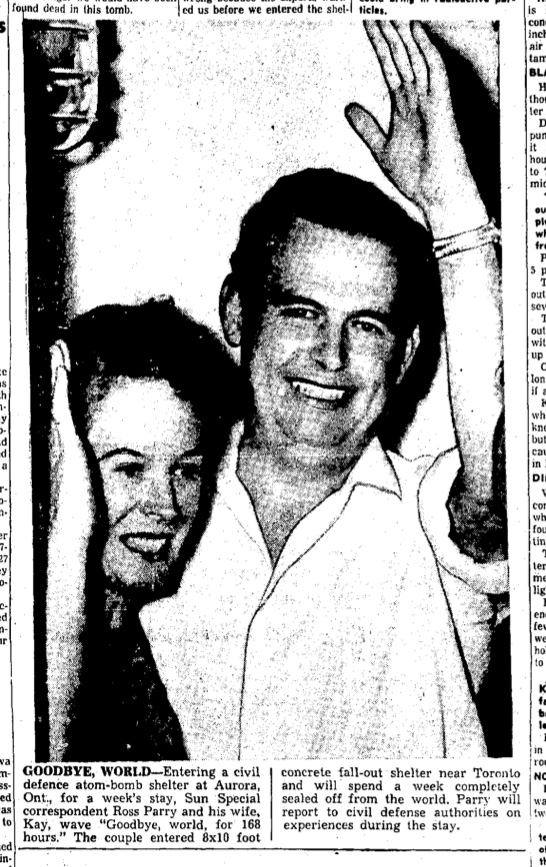 Ross Parry’s accounts of their stay in the bomb shelter carried neither the goofy charm of the Mininson honeymoon, nor the patriotic rah-rah of the Powner/Vernon effort. Instead, the Parrys faced sobering reality within the first 24 hours of their arrival on August 10. Their shelter was not airtight. Outside air made them cool and comfortable, but would have led to their death in an actual attack.

The Parrys missed their four children, but were glad they heeded their pediatrician’s advice not to bring them. “This shelter is no place for children,” Ross Parry wrote. “A family could go stark raving mad in here, even though the shelter would be the only hope of survival.”