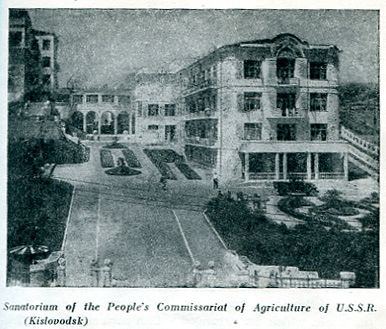 I have a fondness for out-of-date travel guides, turn-of-the-twentieth-century Baedekers and mid-century guides for women traveling alone, to name a couple of examples, each one a little glimpse into social mores of the past as well as tourist attractions long gone. I even have a few guides to the Soviet Union and other countries behind the former Iron Curtain. These are most notable for their bizarre — yet highly enjoyable — combination of extreme utilitarianism and blazing propaganda.

Without doubt, the oddest of these is Health Resorts of the USSR, a Stalin-era guide to the Soviet Union’s hot springs and mud baths. Published in roughly 1939 or so (my copy was date stamped into the Oakland [California] Public Library collection on April 24, 1942), Health Resorts described the U.S.S.R. as a spa-lover’s paradise: “The Great October Socialist Revolution heralded in the extensive, socialist, planned development of health resorts in the Soviet Union,” aided by “a clean sweep of the age-old impediments of property rights.” (Imagine for a moment Mar-a-Lago converted into a complex of hot tubs, steam rooms, and saunas, providing free Swedish massage and seaweed wraps to the masses.) “The Stalin Constitution, most democratic of all Constitutions,” promised “the right to rest and leisure” as well as “the provision of a wide network of sanatoria, rest homes and clubs for the accommodation of the toilers,” who would be paid for their vacation time.

Sounds dreamy, doesn’t it? But Spalingrad wasn’t for sissies. There were “the very popular thermal radio-active waters of the Tskhaltubo health resort in Georgia” which could “be taken twice daily with complete safety,” or so they said. Petroleum baths were the specialty at Azerbaijan. I was tempted by the mud baths at Saki and Berdyansk until I read that “a method of locally applied treatment” was “the intra-vaginal application of hot mud in the form of tampons.” 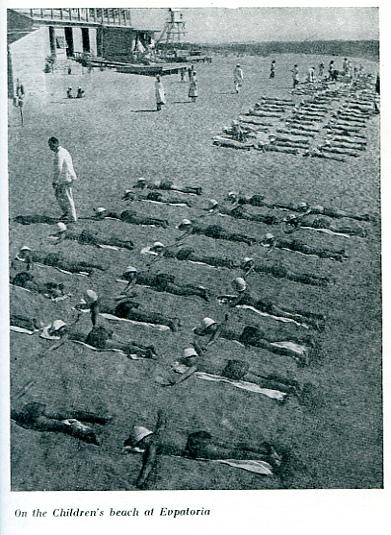 The children’s beach at Evpatoria sounded idyllic: “After enjoying treatment, the kiddies splash and paddle around in the warm salt water, swarm on the sands, gather cockle-shells and romp about playing merry games. Therapeutic treatment, usually so painful and hateful to the child, becomes one continuous gay holiday.” But as a friend pointed out, the beach in the photo resembles a mass grave.

Every once in a while a glimpse of pre-Soviet color slips into the pages of Health Resorts. A “a popular haunt for strollers” outside the town of Kislovodsk and its mineral springs (two places to take the waters were the Oktyabriski Revolutsii — October Revolution — and the Heavy Industry Workers’ Sanatorium) was the “Castle of Intrigue and Love,” though how much of either one could handle after a hot mud tampon is debatable.

Like me, you may be wondering exactly who was visiting the U.S.S.R. in the 1930s. Lots of people, it turns out, mostly westerners who wanted to see for themselves what one American newspaper in 1930 called “The Great Russian Experiment in Socialism.” P.L. Travers, the author of Mary Poppins, was one of a group of English visitors in 1932. She noted that people at home were either fanatically for or against the new country, and viewed her trip as “either the Chance of a Lifetime or a Piece of Utter Recklessness.” Harpo Marx performed in Moscow and other cities in 1933, because his pal the theater critic Alexander Woollcott thought it would be a coup for him to be the first American to perform after the United States diplomatically recognized the U.S.S.R. (“With a name like yours, how can you miss?” Woollcott cajoled. “Can’t you see the three sheets? ‘Presenting Marx — In person.’”) 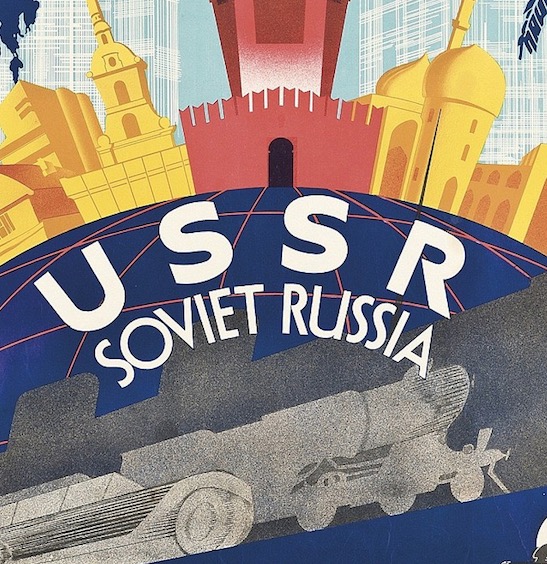 The Soviet Union welcomed visitors, at least for a while. In the words of historian Michael David-Fox, “Soviet tourism would show enemies strength and turn neutral visitors into friends.” Tourists also brought with them much-needed hard currency in the form of dollars, pounds, and deutschmarks. The notorious Soviet travel agency, Intourist, was founded in 1929 (its chairman was Stalin’s brother-in-law). A United Press story from September of that year noted that 4000 foreigners had visited the Soviet Union by the end of August, 3000 of whom were Americans. Even assuming for Intourist inflation, it was a significant number.

With offices in New York, Berlin, and London, Intourist offered a set number of itineraries for travelers to chose from. In 1931, there were 12; two years later there were 36. Once in the Soviet Union, tourists found crumbling accommodations (Travers noted that the walls were already peeling in her “very modern, very ugly, very new” hotel in Leningrad), and monotonous meals. Whether traveling in a group or individually, they were assigned an interpreter to guide them through a heavy schedule of frequently stultifying wonders. Travers’s group visited a footwear factory, model daycare, and prison (she refused to tour the “House of Prostitutes”). Wandering about unaccompanied was forbidden. Visitors wondered if they were being spied upon. They usually were. 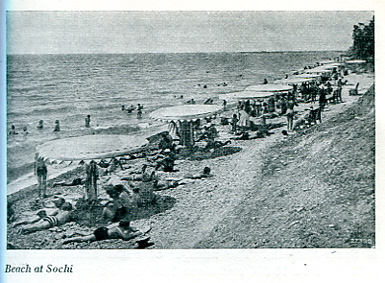 Besides intelligence gathering, another reason guides stuck to tourists like flypaper was to avoid embarrassing incidents. On a VOKS tour in 1936 (the acronym stood for the All-Union Society for Cultural Relations with Foreign Countries; founded in 1925, the organization encouraged just that), a group of visiting intelligentsia was taken to the wrong section of the Bolshevo commune outside Moscow. One of them (the pacifist feminist Gabriele Duchene) was approached by a young man, who introduced himself as the missing stepson of the Cubist sculptor Jacques Lipchitz, stated that he had been held against his will for the past six years, and begged her to take a message to his mother in France.

Lipchitz’s stepson, Andre Shimkevich, was finally released from prison in 1957 (for a time in 1947, he shared a cell with humanitarian Raoul Wallenberg). Most weren’t as lucky — a million or more people died during Stalin’s purges in the 1930s, disappeared for “counter-revolutionary activities” and other trumped up charges. It turns out that Health Resorts of the USSR was the purest sort of propaganda, presenting the fruits of a workers’ paradise of which only a very few were allowed to partake. Of course, by the time the book was received by the Oakland library system, World War II was raging (the Battle of Stalingrad began three months later). It was never checked out.