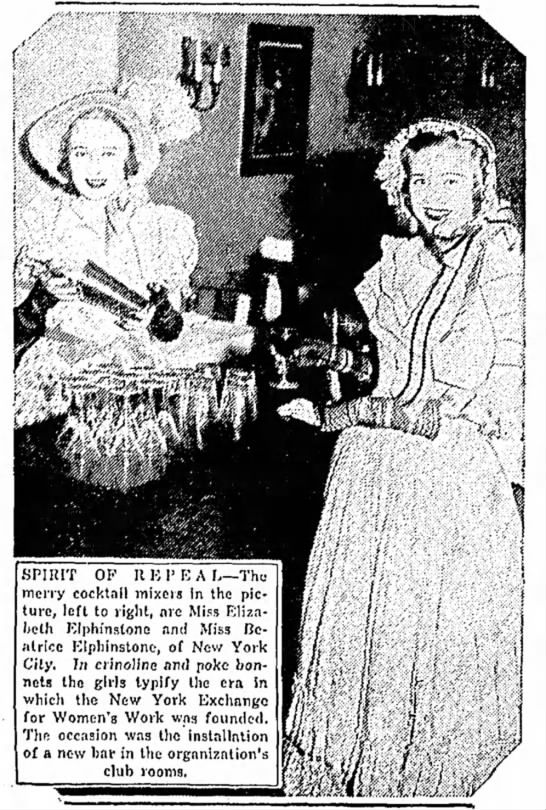 On April 26, 1934, a scant four months after the repeal of Prohibition, the ladies of the New York Exchange for Woman’s Work opened a bar. News photos showed a pair of smiling young women, one wielding a cocktail shaker and the other a martini glass, both dressed in the antebellum outfits that gave the joint its moniker, The Crinoline Bar, though it had no official name.

Established in 1878, the Exchange was a kind of “up by their bootstraps” welfare organization whereby Civil War widows and later generations of down-on-their-luck-but-otherwise-genteel ladies might (in the words of its manager in 1928) “meet their financial problems without leaving their homes.” They did this by selling handiwork and crafts at the Exchange’s showroom in New York City. 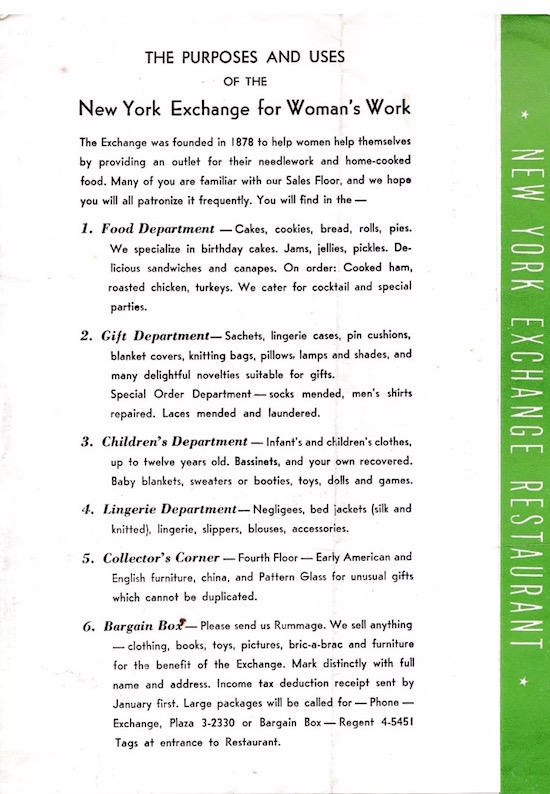 To supplement its own income, the Exchange opened what became a popular restaurant in 1919. Twenty years later, New York: Fair or No Fair, a guidebook for women visiting the World’s Fair in Queens, marked the Exchange as a place where a diner would be “comfortably surrounded by other solitary females,” with a “menu planned with a thought for feminine tastes,” i.e., codfish balls and a famous bittersweet chocolate cake. Thanks to the presence of the Crinoline Bar, it was also a place where a solitary female could quench her thirst with a Manhattan, martini, or other alcoholic beverage.

This was no small feat. For much of the twentieth century, the presence in drinking establishments of unescorted women (alone or in groups) was banned by law or fiat, or heavily restricted to particular times or areas when or where they were tolerated. Unescorted women might be welcomed during afternoon or early evening hours, or be allowed to sit at tables, but not to stand at the bar proper. 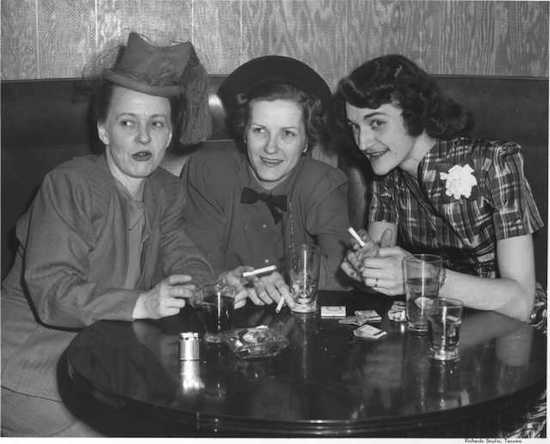 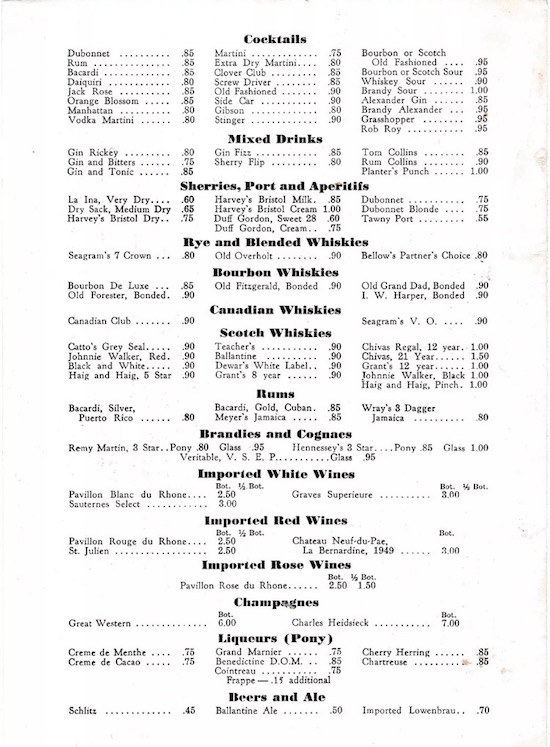 Despite the looming presence of the temperance movement before Prohibition, the issue wasn’t simply one of women drinking alcohol. By the turn of the twentieth century, the female guests at a sophisticated dinner party might partake in sherry, wine, and champagne along with cordials after dinner. “Crème de menthe in tiny glasses filled with finely chopped ice is always liked,” noted The Etiquette of New York To-Day (1906).

But when women ventured out of the house (as they did in greater and greater numbers as the century ground on), their presence in what had previously been male space became problematic. A Report of the Wisconsin Vice Committee (1914) noted that many of the female patrons of the so-called wine rooms attached to saloons and accessed by special “Ladies Entrances” were “not professional prostitutes,” but morally weak women “with a strong desire for drink.” The wine room was a slippery slope, where they found “generous men… willing to buy them drinks.” Moral degeneracy followed. Among the committee’s recommendations: “That no woman without male escort should be permitted in saloons.”

The presence of a male at a woman’s side meant (at least in theory) that she was not a prostitute, and that her potentially problematic sexuality was constrained. Thus, the arguments against unescorted women almost always hinged on the twin specters of prostitution and the nebulous quality of “respectability.”

The St. Louis Post Democrat presented multiple voices in 1935, when the city considered an ordinance keeping women out of cocktail bars, either as customers or as bartenders. The commissioner behind the provision argued that the sobriety of women was more important than that of men “because we look to women, the mothers of the race, for our highest moral standards and examples.” (Class and no doubt race also played a role in his argument. Female “patrons of taverns, cocktail bars, saloons” in poorer neighborhoods were “largely that of the most ancient profession” plying their trade. “While in swank cocktail bars uptown, women with plenty of money and social position” were merely “cultivating a very bad habit.”) 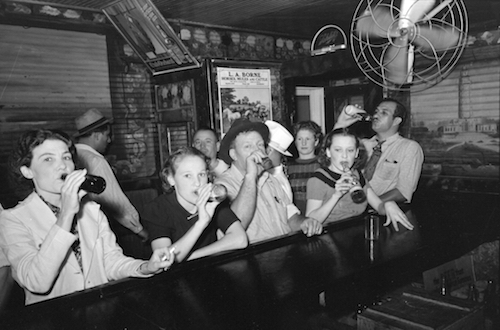 A women’s club president thought a ban would help protect women “for their own good,” there being “nothing more pathetic than an intoxicated woman.” Women didn’t have “the nervous and physical stamina to cope with the effects of strong drink,” losing “their sense of discretion and women are just not supposed to do that.” On the other hand, the chairwoman of a volunteer committee believed it was “nobody else’s business” if women wanted to drink, and concluded that “it would be perfectly stupid to make such a ruling.” (The city council ignored the proposal when it came up for discussion.)

Many women found the bans unfair. In 1945, “Three Unescorted Girls” in Fresno, California, wrote to the local paper in response to an article headlined “Tavern Owners Seek Plan to Bar Immoral Women” (part of an attempt by the military to curb the spread of venereal disease during the Second World War). “Does this mean that all women who go to bar unescorted are immoral?” they asked. “What about the houses of ill-repute still in operation in Fresno” despite the mayor’s “so-called vigilance”? Still more to the point: “What is the difference between an unescorted woman and a man, who is not escorting someone, going into a bar which is open to both sexes?” The paper didn’t answer, other than to note that the girls asked “Pertinent Questions.” 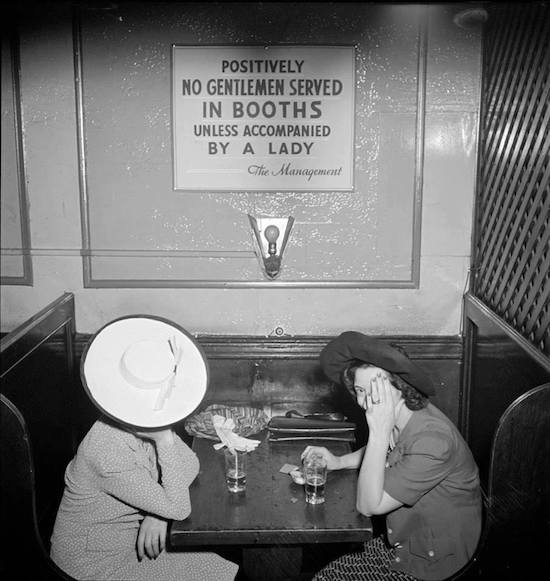 Advice columnists focused on appearances. “It is not only a question of what the world in general will think [of women drinking in public] but of the much more important impression that men will form,” wrote grand dame Millicent Fenwick in Vogue’s Book of Etiquette (1948). Social arbiter Carolyn Hagner Shaw devoted an installment of her “Modern Manners” column to the subject of “Women in Bars” in 1960. “While actually doing nothing wrong,” a woman courted “criticism and sometimes unpleasant comment” by patronizing a bar, unescorted, at night. Even during daylight hours, “the most reputable hotel lounge” was an iffy proposition for a solitary woman. “Let’s face it,” she concluded. “A woman who wishes to keep her place in the community must keep the question ‘How will it look to others?’ uppermost in her mind.” 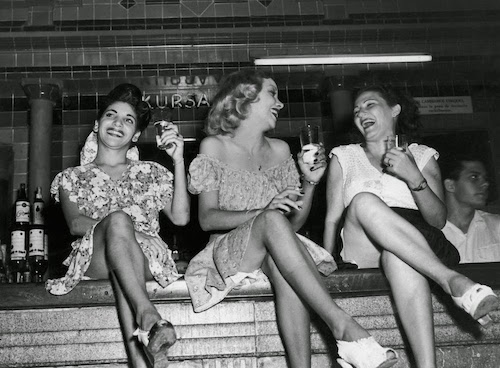 Emily Post made much the same conclusion three years later, telling a woman whose husband felt it had been improper for her to sit at the bar and have a cocktail when she arrived before him at the restaurant where they were to have dinner: “You should not have sat at the bar. If there was no other place to sit, you should have gone into the dining room and had your cocktail at the table while waiting for your husband.” Again, it wasn’t about drinking, but the appearance of being a woman on the hunt for sex, paid or otherwise. (Devoted watchers of Mad Men will recall that extramarital sex is exactly what happened when Betty Draper chose to sit alone at a bar at the height of the Cuban missile crisis.)

A series of “bar ins” by women’s liberationists in the 1970s helped dismantle the ordinances against unescorted women, first in New York, and then across the U.S. Men were frequently loath to give up their spaces. A pair of female journalists who tried, in 1970, to order a drink in the “Men’s Bar” of a hotel in Flemington, New Jersey, were told by an irate customer: “I’ll liberate you — right to the dining room!” The reporters noted that on a typical day more than half the customers of the dining room were “elderly women,” presumably there to get a drink.