One in a series of posts by HILOBROW’s favorite historian — our friend and frequent contributor, Lynn Peril.

Sensational tales of drinking, smoking, and otherwise misbehaving young women were all over the newspapers in 1922, but the story that appeared in The New York Times on March 23rd still had the power to shock. A secret girl gang called the “Society of Shifters” was shaking down friends and coworkers for pocket change and silk stockings.

Gertrude Robinson-Smith, president of the Working Girls’ Vacation Society (a savings fund for shopgirls; it eventually became the American Woman’s Association), told the Times that she learned of the organization from members who were unable to make their regular deposits — because they’d been hit up by the flapper bandits. The ruse worked like this: A Shifter approached a nonmember and asked if she wanted to join. Once the mark said yes (Robinson-Smith blamed peer pressure), the Shifter swore her to secrecy and extracted anywhere from 25 cents to a dollar from her victim. The initiator then demanded a pair of stockings, and told the new Shifter to “go out and sting five other girls and make each of them give you any present that you want.” 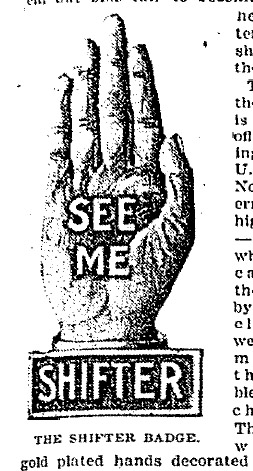 Robinson-Smith deemed the group “an abominable thing,” but she provided further juicy details the following day. There was a Shifter handshake (open palmed), dress (black and white), walk (shuffling), and motto (“Be a good fellow — get something for nothing”). Most startling was the existence of male Shifters (“Standers,” according to a guide to Shifter slang) whose presence meant the initiation rites at several high schools degenerated into petting parties. Indeed, the Shifter insignia of a brass paperclip on a girl’s lapel was tantamount to a “flirtation badge,” an open invitation to “intimacies that self-respecting girls would ordinarily resent.” 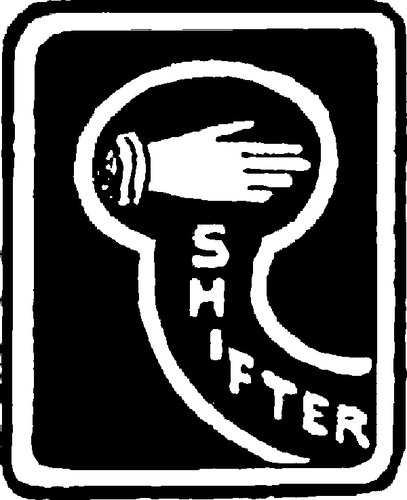 The Shifters, of course, were no ordinary girls. On March 26, the gang was noted to have invaded elementary schools in Yonkers, where an Anti-Shifters’ Society was also said to exist. On the same day, a high school flapper, reacting to news that jewelers had begun manufacturing special Shifter badges, scoffed at the Johnny-come-latelies trying to monetize a previously pure scene. “That’s all junk, so far as we’re concerned. Somebody may… be trying to make a regular business of it, but we started it just for a ‘jazz,’” she told the Times.

By then it was too late. “Get all you can” was another Shifter motto, one manufacturers immediately took to heart. A printed Shifter constitution, by-laws, and badge were available from the “Official Shifters Emblem Company” at 303 Fifth Avenue. There was even a short-lived Shifter magazine, though there was little besides the title to distinguish it from other college humor magazines. 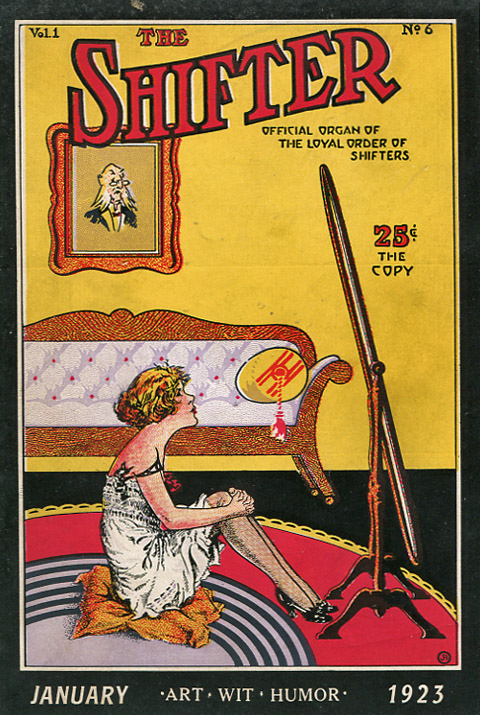 Over the next several weeks, high schools and colleges from New Jersey to Washington, D.C., Cincinnati, and Chicago announced they were banning Shifters almost as quickly as chapters appeared. A revivalist billed as “The Texas Tornado” declared Jezebel the first “Queen of the Shifters,” whose tawdry last act was to “paint her face” before “the dogs ate her.” A state’s attorney in Chicago opened an inquiry: was Shifterism “morally detrimental” or merely “a harmless fad”? The muckraking journalist Upton Sinclair even decried the organization in a chapter on “Sex and Young America” in his Book of Life (1922).

And then it was over. “What Has Happened to Shifters of America?” asked The Border Cities Star on May 27. By August 12, a Missouri newspaper had consigned the Shifters to “the dust bin of memory” along with ectoplasm and galoshes.

Writer Ben Schott brought the Shifters back to the pages of The New York Times in 2012. In a capsule history of the group, Schott noted its “fragmented and contradictory” origins and that it had “no structure, no leader, no politics.” He also painted Gertrude Robinson-Smith as something of a prude, quoting the Philadelphia Inquirer’s sniffy mention of “a New York woman” who went “into hysterics” over the group.

The Shifters lacked structure and leadership for the same reason they had appeared “seemingly out of thin air and landed mid-panic,” as Schott wrote. The group, and the panic, was what one of its originators termed a “simon-pure hoax” from the start. And Miss Gertrude Robinson-Smith knew it all along.

Newspaperwoman and novelist Zelda Popkin spilled the beans in her 1956 memoir. Back in 1921, she and her husband, Louis “Pop” Popkin ran a New York City public relations agency. When their press release announcing that the Working Girls’ Vacation Society had received over a million dollars in deposits was ignored by every newspaper they submitted it to, Pop swung into action. The working girls of New York, he wrote, were being fleeced of their savings by a sinister “Flapper Ku Klux Klan” known as the Shifters. Having discovered this nefarious organization, Gertrude Robinson-Smith of The Working Girls’ Vacation Society was working to eradicate it.

An hour after the press release was delivered to the papers, the phone started ringing off the hook. Pop left it to Zelda and an associate to provide further details. “Luba and I invented a Shifter handshake and a Shifter walk,” Zelda recalled.

Drawing upon the “picturesque” language used by another employee’s younger sisters, they compiled a Flapper’s Dictionary, using the terms Flapper and Shifter interchangeably. (“Oil Burner: girl who chews gum; Princess Mary: girl about to be married; Dud: a Flapper who can’t keep in the swim; Young Otis: chap from the country,” etc.) They also wrote a Shifter constitution and by-laws. The story went viral in an analog age, spreading like a “prairie fire.” Reporters arrived at the Popkins’ office each morning, then “hung around all day, [and] helped crank the mimeograph” turning out press releases.

“Then the slat slimped,” Popkin wrote, using Shifter slang she’d had a hand in creating. “The menace and the crusade died because Pop, Jean, Luba and I couldn’t think of one additional word to write.”