HiLoBooks is pleased to serialize John Buchan’s 1899 science fiction novella No Man’s Land. First published in Blackwood’s Magazine, the story is sometimes cited as an influence on Robert E. Howard and other pulp writers of Howard’s era. We are great admirers of Buchan’s, at HILOBROW: Seven of his books appear on our list of the 200 Greatest Adventure Novels, and we’ve previously serialized his 1922 adventure novel Huntingtower. Enjoy!

ALL INSTALLMENTS SO FAR
***
CHAPTER 2: Tells of an Evening’s Talk

The shepherd was a masterful man; tall, save for the stoop which belongs to all moorland folk, and active as a wild goat. He was not a new importation, nor did he belong to the place; for his people had lived in the remote Borders, and he had come as a boy to this shieling of Farawa. He was unmarried, but an elderly sister lived with him and cooked his meals. He was reputed to be extraordinarily skilful in his trade; I know for a fact that he was in his way a keen sportsman; and his few neighbours gave him credit for a sincere piety. Doubtless this last report was due in part to his silence, for after his first greeting he was wont to relapse into an extreme taciturnity. As we strode across the heather he gave me a short outline of his year’s lambing. “Five pair o’ twins yestreen, twae this morn; that makes thirty-five yowes that hae lambed since the Sabbath. I’ll dae weel if God’s willin’.” Then, as I looked towards the hilltops whence the thin mist of morn was trailing, he followed my gaze. “See,” he said with uplifted crook — “see that sicht. Is that no what is written of in the Bible when it says, ‘The mountains do smoke’?” And with this piece of exegesis he finished his talk, and in a little we were at the cottage.

It was a small enough dwelling in truth, and yet large for a moorland house, for it had a garret below the thatch, which was given up to my sole enjoyment. Below was the wide kitchen with box-beds, and next to it the inevitable second room, also with its cupboard sleeping-places. The interior was very clean, and yet I remember to have been struck with the faint musty smell which is inseparable from moorland dwellings. The kitchen pleased me best, for there the great rafters were black with peat reek, and the uncovered stone floor, on which the fire gleamed dully, gave an air of primeval simplicity. But the walls spoiled all, for tawdry things of to-day had penetrated even there. Some grocers’ almanacs — years old — hung in places of honour, and an extraordinary lithograph of the Royal Family in its youth. And this between crooks and fishing-rods and old guns, and horns of sheep and deer.

The life for the first day or two was regular and placid. I was up early, breakfasted on porridge (a dish which I detest), and then off to the lochs and streams. At first my sport prospered mightily. With a drake-wing I killed a salmon of seventeen pounds, and the next day had a fine basket of trout from a hill burn. Then for no earthly reason the weather changed. A bitter wind came out of the north-east, bringing showers of snow and stinging hail, and lashing the waters into storm. It was now farewell to fly-fishing. For a day or two I tried trolling with the minnow on the lochs, but it was poor sport, for I had no boat, and the edges were soft and mossy. Then in disgust I gave up the attempt, went back to the cottage, lit my biggest pipe, and sat down with a book to await the turn of the weather. 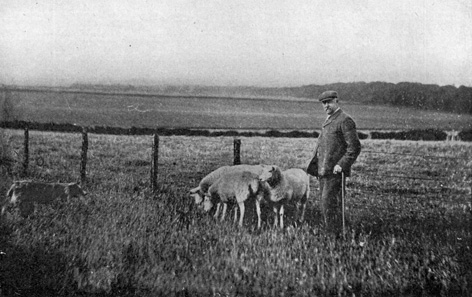 The shepherd was out from morning till night at his work, and when he came in at last, dog-tired, his face would be set and hard, and his eyes heavy with sleep. The strangeness of the man grew upon me. He had a shrewd brain beneath his thatch of hair, for I had tried him once or twice, and found him abundantly intelligent. He had some smattering of an education, like all Scottish peasants, and, as I have said, he was deeply religious. I set him down as a fine type of his class, sober, serious, keenly critical, free from the bondage of superstition. But I rarely saw him, and our talk was chiefly in monosyllables — short interjected accounts of the number of lambs dead or alive on the hill. Then he would produce a pencil and note-book, and be immersed in some calculation; and finally he would be revealed sleeping heavily in his chair, till his sister wakened him, and he stumbled off to bed.

So much for the ordinary course of life; but one day — the second, I think, of the bad weather — the extraordinary happened. The storm had passed in the afternoon into a resolute and blinding snow, and the shepherd, finding it hopeless on the hill, came home about three o’clock. I could make out from his way of entering that he was in a great temper. He kicked his feet savagely against the door-post. Then he swore at his dogs, a thing I had never heard him do before. “Hell!” he cried, “can ye no keep out o’ my road, ye bruits?” Then he came sullenly into the kitchen, thawed his numbed hands at the fire, and sat down to his meal.

I made some aimless remark about the weather.

“Death to man and beast,” he grunted. “I hae got the sheep doun frae the hill, but the lambs will never thole this. We maun pray that it will no last.”

His sister came in with some dish. “Margit,” he cried, “three lambs away this morning, and three deid wi’ the hole in the throat.”

“It has happened noo,” he said surlily. “But, by God! if it happens again I’ll gang mysel’ to the Scarts o’ the Muneraw.”

“O Adam!” the woman cried shrilly, “haud your tongue. Ye kenna wha hears ye.” And with a frightened glance at me she left the room.

I asked no questions, but waited till the shepherd’s anger should cool. But the cloud did not pass so lightly. When he had finished his dinner he pulled his chair to the fire and sat staring moodily. He made some sort of apology to me for his conduct. “I’m sore troubled, sir; but I’m vexed ye should see me like this. Maybe things will be better the morn.” And then, lighting his short black pipe, he resigned himself to his meditations.

But he could not keep quiet. Some nervous unrest seemed to have possessed the man. He got up with a start and went to the window, where the snow was drifting unsteadily past. As he stared out into the storm I heard him mutter to himself, “Three away, God help me, and three wi’ the hole in the throat.”

Then he turned round to me abruptly. I was jotting down notes for an article I contemplated in the Revue Celtique, so my thoughts were far away from the present. The man recalled me by demanding fiercely, “Do ye believe in God?”

I gave him some sort of answer in the affirmative.

“Then do ye believe in the Devil?” he asked.

The reply must have been less satisfactory, for he came forward and flung himself violently into the chair before me.

“What do ye ken about it?” he cried. “You that bides in a southern toun, what can ye ken o’ the God that works in thae hills and the Devil — ay, the manifold devils — that He suffers to bide here? I tell ye, man, that if ye had seen what I have seen ye wad be on your knees at this moment praying to God to pardon your unbelief. There are devils at the back o’ every stane and hidin’ in every cleuch, and it’s by the grace o’ God alone that a man is alive upon the earth.” His voice had risen high and shrill, and then suddenly he cast a frightened glance towards the window and was silent.

I began to think that the man’s wits were unhinged, and the thought did not give me satisfaction. I had no relish for the prospect of being left alone in this moorland dwelling with the cheerful company of a maniac. But his next movements reassured me. He was clearly only dead-tired, for he fell sound asleep in his chair, and by the time his sister brought tea and wakened him, he seemed to have got the better of his excitement.

See All Posts by John Buchan