HiLoBooks is pleased to serialize John Buchan’s 1899 science fiction novella No Man’s Land. First published in Blackwood’s Magazine, the story is sometimes cited as an influence on Robert E. Howard and other pulp writers of Howard’s era. We are great admirers of Buchan’s, at HILOBROW: Seven of his books appear on our list of the 200 Greatest Adventure Novels, and we’ve previously serialized his 1922 adventure novel Huntingtower. Enjoy!

ALL INSTALLMENTS SO FAR
***
CHAPTER 5: The Troubles of a Conscience

My body and senses slept, for I was utterly tired, but my brain all the night was on fire with horrid fancies. Again I was in that accursed cave; I was torturing my hands in the fire; I was slipping barefoot among jagged boulders; and then with bursting heart I was toiling the last mile with the cottage light — now grown to a great fire in the heavens — blazing before me.

It was broad daylight when I awoke, and I thanked God for the comfortable rays of the sun. I had been laid in a box-bed off the inner room, and my first sight was the shepherd sitting with folded arms in a chair regarding me solemnly. I rose and began to dress, feeling my legs and arms still tremble with weariness. The shepherd’s sister bound up my scarred wrists and put an ointment on my burns; and, limping like an old man, I went into the kitchen.

I could eat little breakfast, for my throat seemed dry and narrow; but they gave me some whisky-and-milk, which put strength into my body. All the time the brother and sister sat in silence, regarding me with covert glances.

“Ye have been delivered from the jaws o’ the Pit,” said the man at length. “See that,” and he held out to me a thin shaft of flint. “I fand that in the door this morning.”

I took it, let it drop, and stared vacantly at the window. My nerves had been too much tried to be roused by any new terror. Out of doors it was fair weather, flying gleams of April sunlight and the soft colours of spring. I felt dazed, isolated, cut off from my easy past and pleasing future, a companion of horrors and the sport of nameless things. Then suddenly my eye fell on my books heaped on the table, and the old distant civilization seemed for the moment inexpressibly dear.

“I must go — at once. And you must come too. You cannot stay here. I tell you it is death. If you knew what I know you would be crying out with fear. How far is it to Allermuir? Eight, fifteen miles; and then ten down Glen Aller to Allerfoot, and then the railway. We must go together while it is daylight, and perhaps we may be untouched. But quick, there is not a moment to lose.” And I was on my shaky feet, and bustling among my possessions.

“I’ll gang wi’ ye to the station,” said the shepherd, “for ye’re clearly no fit to look after yourself. My sister will bide and keep the house. If naething has touched us this ten year, naething will touch us the day.”

“But you cannot stay. You are mad,” I began; but he cut me short with the words, “I trust in God.”

“In any case let your sister come with us. I dare not think of a woman alone in this place.”

“I’ll bide,” said she. “I’m no feared as lang as I’m indoors and there’s steeks on the windies.”

So I packed my few belongings as best I could, flung my books into a haversack, and, gripping the shepherd’s arm nervously, crossed the threshold. The glen was full of sunlight. There lay the long shining links of the Farawa burn, the rough hills tumbled beyond, and far over all the scarred and distant forehead of the Muneraw. I had always looked on moorland country as the freshest on earth — clean, wholesome, and homely. But now the uplands seemed like a horrible pit. When I looked to the hills my breath choked in my throat, and the feel of soft heather below my feet set my heart trembling. 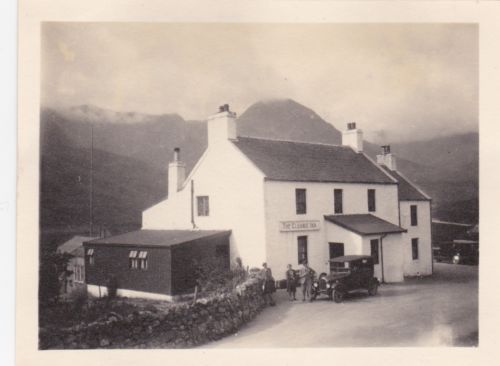 It was a slow journey to the inn at Allermuir. For one thing, no power on earth would draw me within sight of the shieling of Carrickfey, so we had to cross a shoulder of hill and make our way down a difficult glen, and then over a treacherous moss. The lochs were now gleaming like fretted silver; but to me, in my dreadful knowledge, they seemed more eerie than on that grey day when I came. At last my eyes were cheered by the sight of a meadow and a fence; then we were on a little byroad; and soon the fir-woods and corn-lands of Allercleuch were plain before us.

The shepherd came no farther, but with brief good-bye turned his solemn face hillwards. I hired a trap and a man to drive, and down the ten miles of Glen Aller I struggled to keep my thoughts from the past. I thought of the kindly South Country, of Oxford, of anything comfortable and civilized. My driver pointed out the objects of interest as in duty bound, but his words fell on unheeding ears. At last he said something which roused me indeed to interest — the interest of the man who hears the word he fears most in the world. On the left side of the river there suddenly sprang into view a long gloomy cleft in the hills, with a vista of dark mountains behind, down which a stream of considerable size poured its waters.

“That is the Water o’ Dule,” said the man in a reverent voice. “A graund water to fish, but dangerous to life, for it’s a’ linns. Awa at the heid they say there’s a terrible wild place called the Scarts o’ Muneraw, — that’s a shouther o’ the muckle hill itsel’ that ye see, — but I’ve never been there, and I never kent ony man that had either.”

At the station, which is a mile from the village of Allerfoot, I found I had some hours to wait on my train for the south. I dared not trust myself for one moment alone, so I hung about the goods shed, talked vacantly to the porters, and when one went to the village for tea I accompanied him, and to his wonder entertained him at the inn. When I returned I found on the platform a stray bagman who was that evening going to London.

If there is one class of men in the world for which I have small inclination it is this; but such was my state that I hailed him as a brother, and besought his company. I paid the difference for a first-class fare, and had him in the carriage with me. He must have thought me an amiable maniac, for I talked in fits and starts, and when he fell asleep I would wake him up and beseech him to speak to me. At wayside stations I would pull down the blinds in case of recognition, for to my unquiet mind the world seemed full of spies sent by that terrible Folk of the Hills. When the train crossed a stretch of moor I would lie down on the seat in case of shafts fired from the heather. And then at last with utter weariness I fell asleep, and woke screaming about midnight to find myself well down in the cheerful English midlands, and red blast furnaces blinking by the railway-side.

See All Posts by John Buchan